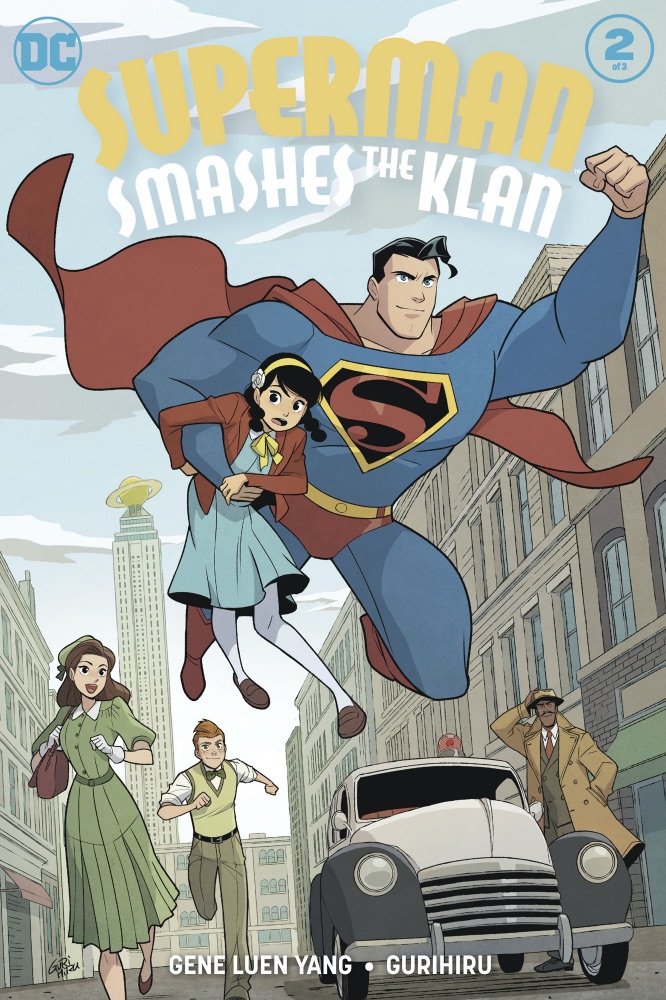 Reviewed by: James Lantz
Click to enlarge
Chuck Riggs and Roberta Lee have helped Superman find the meeting location of the Klan of the Fiery Cross. Yet, they haven't found the missing Tommy Lee. Thinking he's having Kryptonite visions, Superman sees Jor-El and Lara, who tell him to look through the woods. This allows him to use his visual powers for the first time and see Tommy in the river. While Jimmy Olsen, Roberta, Chuck and Metropolis Police Inspector Bill Henderson follow, Superman takes Tommy, whose broken arm is in a sling made of the Man of Steel's cape, to the hospital. That cape is late turned into a jacket for Roberta by their mother. Meanwhile Matt Riggs, Grand Scorpion of the Klan of the Fiery Cross, is making a bomb for the white supremacists' next target - the Unity House Community Center. Can Superman stop the Grand Scorpion from stinging Metropolis with his message hate?

As Jor-El and Lara attempt to aid Superman, we get insight into his childhood 1926 Smallville. The God fearing Braverman family believe young Clark Kent is a demon because they saw him perform superhuman feats. The Kents and the local sheriff laugh this off, but this doesn't stop Clark from wondering who and what he truly is. For this reason Superman doesn't want to use his full abilities. He doesn't want people to fear him. There's enough fear mongering created by the Klan of the Fiery Cross, who may be responsible for the secret laboratory Lois Lane found in the Metropolis Health Department. Superman and his friends are likely to have their hands full with those hooded bigots.

The Daily Planet is offering a thousand dollars for the arrest of the Klan of the Fiery Cross' Grand Scorpion. A nervous Chuck Riggs, who knows of his uncle's plans to bomb Unity House, suggests that Jimmy and the kids all go to the movies. He doesn't take into account that Unity House founders Reverend Leeds, Rabbi Stone and Father Shain might be in their offices. They are rescued by Superman, but the Man of Tomorrow couldn't find the bomb in time. The Klansmen who planted the device are no help. Plus, the Unity House attack seems like a distraction. The Grand Scorpion and the rest of the Klan have taken the people in the Daily Planet Building hostage, including the African American Inspector Henderson. Now, their flaming cross is sprawled atop the Planet's globe.

NOTE: This issue also features the second part of an afterword by Gene Luen Yang. This time, he looks at Superman's early history, the radio show, World War II and the bigotry faced by those of Jewish faith, Japanese Americans and non-white soldiers in the United States military of the time.

Story - 5: The Adventures of Superman radio show is perhaps one of the greatest versions of the character. I consider many of the stories in it some of the greatest Superman sagas of all-time. That said, Gene Luen Yang has captured the feeling of the radio program perfectly in this second chapter. This could not have been an easy task. Yang did his homework and wrote a comic that doesn't just adapt one of The Adventures of Superman's most famous story arcs. He pays an amazing tribute to it and the series. I cannot recommend this comic enough. Superman Smashes The Klan is the best one out there.

Art - 5: If ever an artist was a perfect fit for a book, Gurihiru fits this one like a glove blending modern style with the Golden Age in which the story takes place. The art is sheer brilliance.

Cover Art - 5: This cover captures the time and the radio serial upon which it is based perfectly. Gurihiru and Gene Luen Yang are the perfect team to bring this Superman to life in comics.