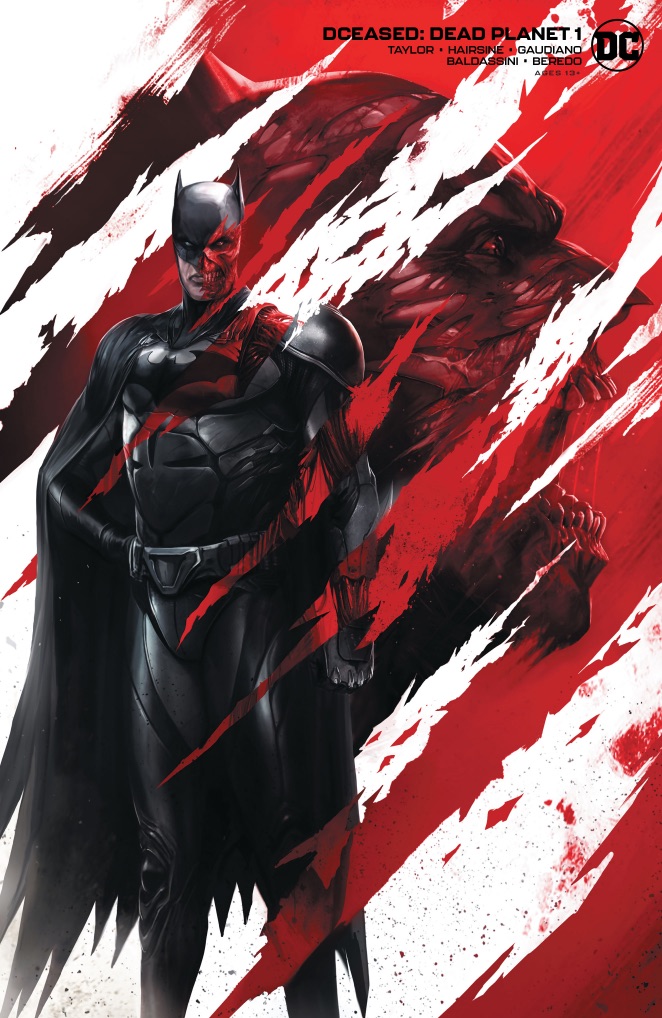 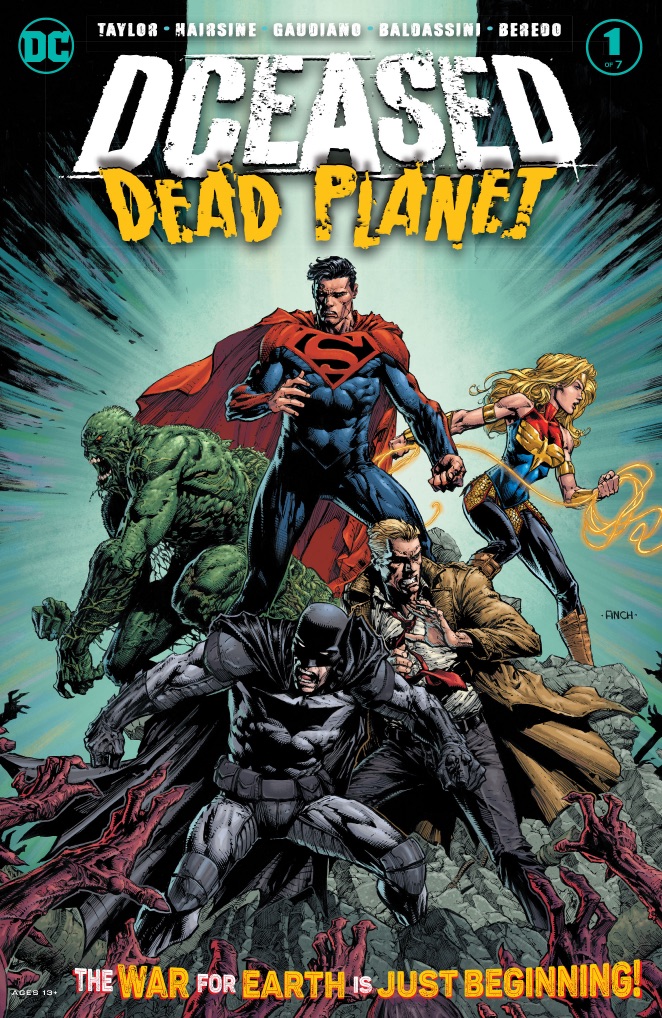 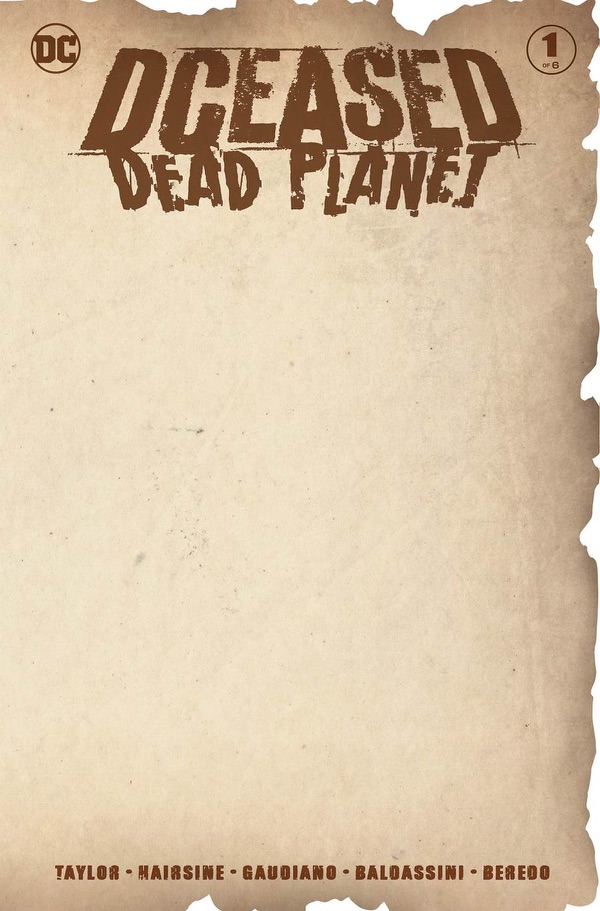 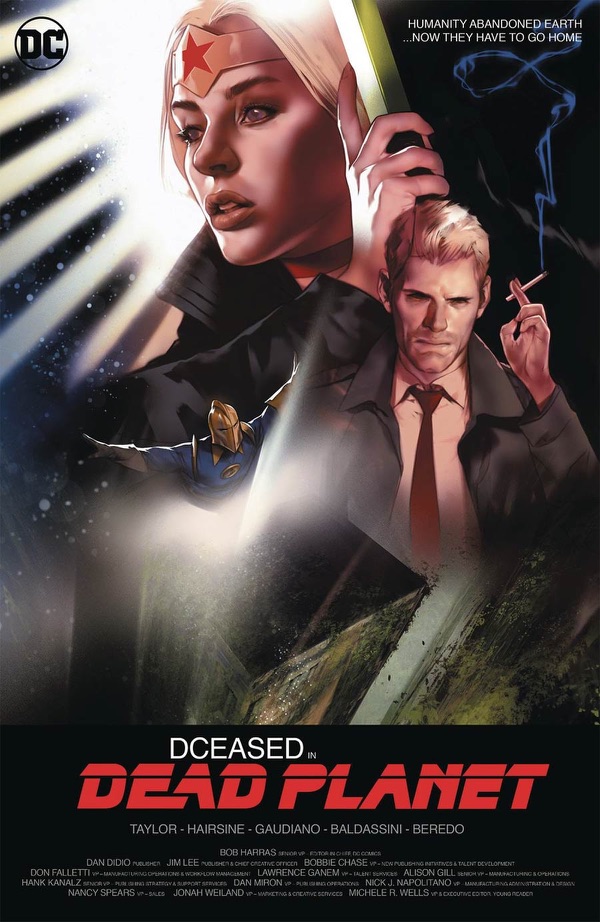 After a quick abbreviated recap of the events that previously happened and the events that happened in between then and now, we learn that Earth evacuated millions of survivors to Earth 2. Cyborg, the individual responsible for the virus outbreak, stayed behind because he thought he was too much of a threat to the survivors. An infected Wonder Woman decapitated the left behind Cyborg. The problem with being half computer is the head of Cyborg lived. Five years later he was betrayed by Batman, he also found a secret trapper buried deep, he turned it and boosted the signal to see if anyone out there could hear it.

Superman (Jon Kent), Wonder Woman (Cassie Sandsmark) and Green Lantern (Dinah Lance Queen), join Batman (Damien Wayne) and attempt to make peace with a native alien species, claiming they are only seeking sanctuary when Alfred interrupts and tells them there is a distress call coming from their old home world. After a long debate on whether to go back to their old planet or not the heroes, along with some other Justice League members including Green Lantern and Hawkgirl, return home to the infected Earth to find the source of the distress signal.

After a quick reunion with the Green Lantern Corps, who have created a quarantine around Earth, the heroes descend on the planet but not before being surprised by a streaking blur across the skies. Krypto jumps on Jon and shows just how much he missed him. Wonder Woman finds Vic's head and Superman finds his body. They are about to return to the ship that helped them return when it explodes unexpectedly. An infected Wonder Woman appears behind Green Arrow and infects him. Enraged, his wife uses her old power the canary cry and screams in rage as she grabs a sword that was discussed earlier as a sword capable of killing gods and charges for Wonder Woman. Superboy yells for her to stop screaming "we can save her". He flies in front of her to stop her as the blade comes down impaling both Superman and the infected Wonder Woman.

Story - 5: Tom Taylor once again proves that if you give him an open sandbox to play with, he will deliver one phenomenal story. Once again he sucks us into this world of horror, builds up characters, makes us develop feelings for these characters, only to take them away from us in the same issue. It was great to see that Krypto survived and his reunion with Superman was heartwarming. It was also interesting to see that the universe around Earth was business as usual with the Lantern Corps patrolling the outskirts of Earth's atmosphere. However, this positive could soon become a negative as the death shock factor is getting predictable. For me, this issue was not the case as I enjoyed every page of the writing and the art. Speaking of art...

Art - 4: There is no denying, this book is gorgeous. Trevor Hairsine returns to art duty but the details in this book just looks better than the previous DCeased series, the only lost point comes from the colorist as some pages look extremely heavy. If every issue looks this good, our eyes are in for a heck of a treat.

Cover Art - 4: Once again the color seems a little heavy, but the overall appeal of the cover is great. One character appears on the front that I don't remember seeing in the book and that usually bothers me, however in this case it just makes me excited for what's to come.