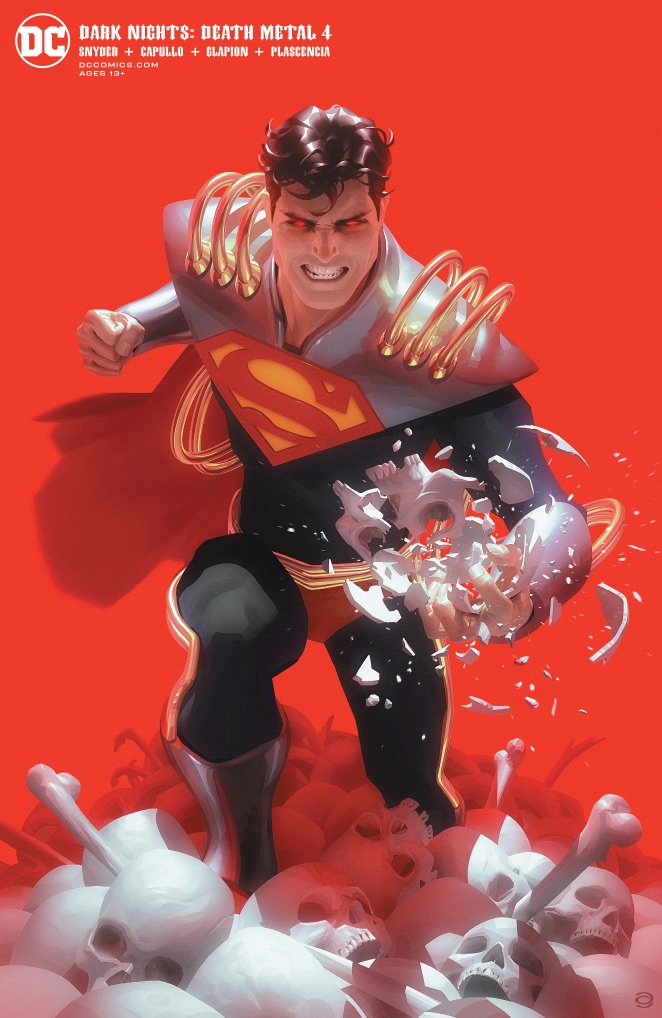 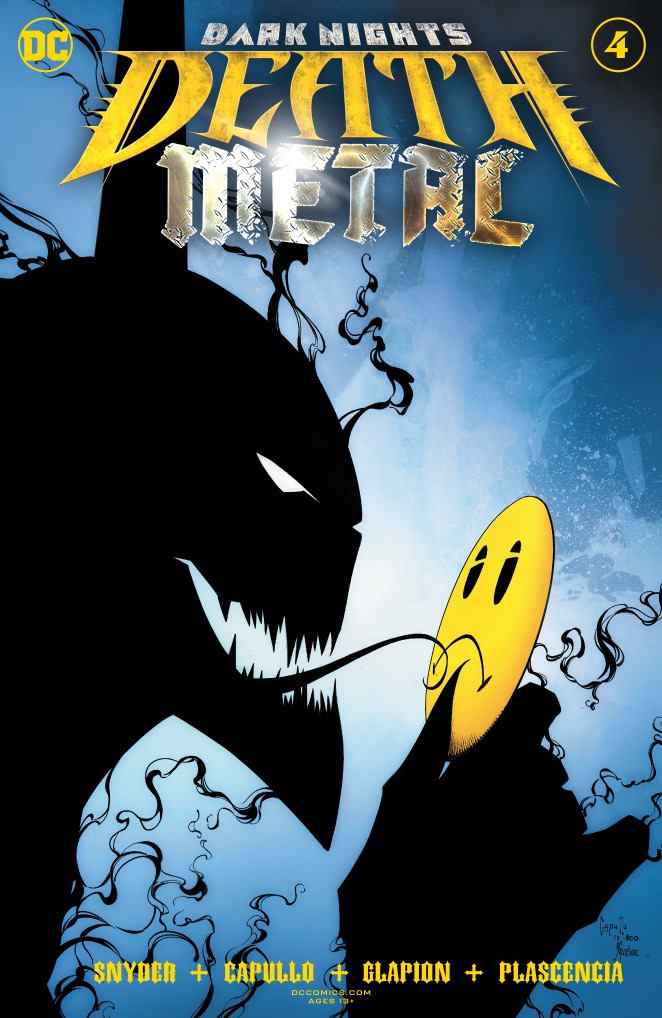 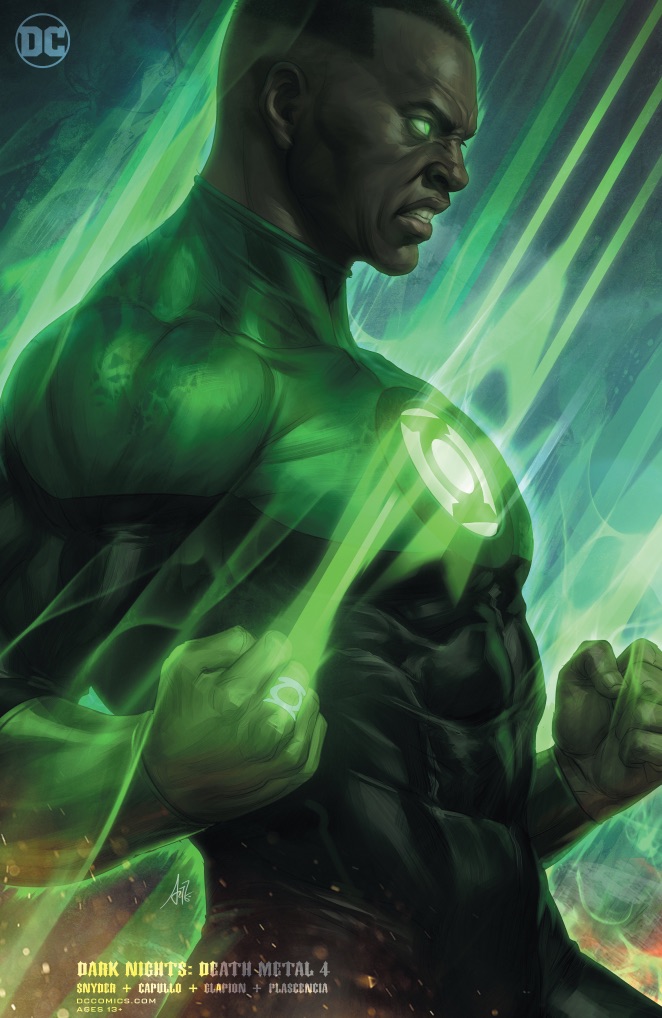 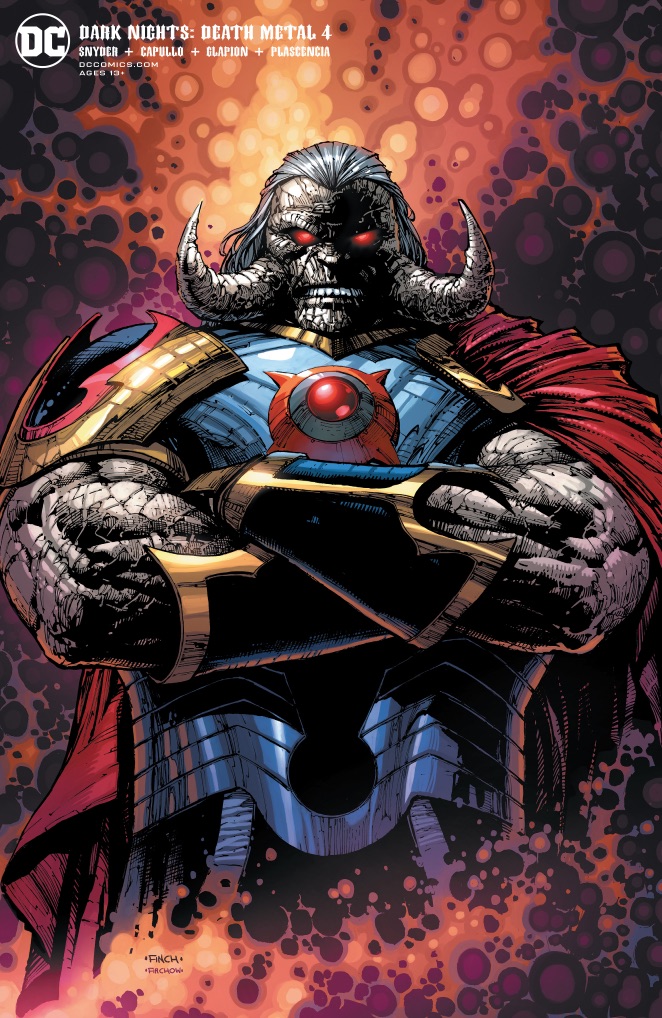 Superman, Batman and Wonder Woman are trapped in Dark versions of the original Crisis events, where the main villains have won. Batman is trying to console the Anti-Monitor (only to be unmade by him), while Superman is being trampled by the corrupted Supermen of the Multiverse (as Darkseid plans to finally turn Superman into his acolyte).

Across the land of Gotham, the Flash's are burning the Speed Force up to outpace the Darkest Knight. Wally contacts Jarro, who's trying to stop Harley from killing the Robin King, after the evil Boy Wonder murdered Hex.

Meanwhile, Wonder Woman learns how Superboy-Prime (after bargaining with the Batman Who Laughs) killed Alexander Luthor Jr., as he served no purpose in this "world of hope". He holds Diana responsible for everything, leaving Wally exposed, and sending the Lanterns to destroy the antennas across the Multiverse, redirecting the Crisis area to one she's trapped in, Wonder Woman's given the Darkest Knight everything he needs. And now Prime stands to direct all Crisis energy to his new master. Wonder Woman begs Prime to reconsider, telling him that change is constant, and that in the end there's room for all universes. Superboy Prime shatters the Crisis worlds (saving Batman and Superman in the process), and directs all energy to Wally.

However it doesn't work, as before they had a chance, the Darkest Knight rigged the Mobius Chair so it would always direct the power into himself. And now he has everything he needs to remake the Multiverse in his own image, behold "The Last 52".

Story - 5: I thought that I was going to be a little lost with this issue, as it seemed like it relied so much on the ancillary books to the series, and since I am only focusing on the main series, I did panic that it would be a little hard to follow. Thankfully Snyder is a master story teller and that wasn't the case. Sgt. Rock caught us up to speed rather quickly. Though I have heard that "Trinity Crisis" is an essential read before this issue, so may pay to track that one down also.

I really like the way that Snyder is integrating his story with those of the past, particularly the Final Crisis and Infinite Crisis call backs. Crisis events are a DC staple, and even though the Metal series are not quite Crisis's, they sure seem to fit into that event mold. And of course, we can't have a Crisis without one or more Flash's. I like that they are not the main focus, yet are still important enough to be integral to the story. I really love seeing Wally West in the spotlight.

I'll admit that I enjoyed that Batman took a backseat this issue, as he was stuck in the void being unmade, however I was looking forward to seeing more of Lex Luthor and Lobo. I really wanted to see how Luthor would shape the multiverse to his liking, and to what extent would Lobo follow his lead. It has to be about more than money at some point with this Lobo. Something to look forward to in the next couple issues perhaps.

Saving the best for last, let's talk about the "Redemption for Superboy Prime". Prime was a character that I had grown to hate for a while, as I felt that Geoff Johns and co. really did the dirt on him, making him represent the "whiney fan community". Though this has been said many times before, you just can't insult your audience that way. I know it was a different time, but Johns and Didio really spat in the face of fans and collectors, by turning a heroic character like Superboy of Earth Prime into a whiney murderous A-hole. So for me, the best part of this issue and this series so far is that Wonder Woman was able to talk Prime into doing the right thing, and have him side with the heroes. And remember, this version of Prime actually succeeded in his Infinite Crisis, so this was a great moment that Snyder managed to execute perfectly. Personally I hope that this may be it for Prime, and that he is killed off a hero in this series, and that they never use the character again going forward, so that he can die a hero.

I am really enjoying this series and becoming an even bigger fan of Snyder, he has the chops to write a Crisis and then some.

Art - 5: Greg Capullo's attention to detail is second to none, he is up there with the greats like Jim Lee, Marc Silvestri, Ivan Reis and many more. The fact that he is so good with a style that isn't hyper realistic and doesn't rely on the tropes of over the top crosshatching, is a testament to just how good he is, and has continued to be over three decades.

I loved his opening scene with the corpse head of Sgt. Rock narrating and catching us up to speed, what was even better was seeing Superman defeated at the hands of three other Supermen, namely Kingdom Come, Justice Lord and Red Son. I also really loved the appearance of the tusked Darkseid, sitting on a throne made by a defeated Green Lantern, and having heroes hold up his arms. I really liked this redesign by Capullo, and actually wouldn't mind seeing a little more of it in the future, so long as it doesn't become the permanent look going forward.

As always, Capullo manages to draw some creepy looking characters (Sgt. Rock, Swamp Thing), and the Robin King is especially creepy looking. His design and the sinister facial expressions make for a really nightmarish version of Robin. And if you haven't seen the awesome action figures that McFarlane Toys have been doing of the Metal series, I suggest checking them out. They really have stepped up and taken the mantle, and filled the void that DC Direct left, when they were forced to shut down.

Lastly, I need to give some more love to Superboy Prime, namely in the way Capullo rendered his look. He definitely resembles a younger Superman, and in many panels, Capullo managed to capture that iconic handsome face associated with Superman. He also made the ridiculous armour that he wears workable, mainly that the pipes that connect from the gauntlets to the shoulder pieces, moved and didn't look stiff, especially in his fight with Wonder Woman.

Cover Art - 3: This is a good cover, especially the tease with the smiley face pin, now a frown. I love the subtle hint to Watchmen.

Green Lantern Variant Cover Art - 5: Though it doesn't directly correlate to the events of the issue, there is a small scene that features John Stewart... And he is my favourite GL.

Darkseid Variant Cover Art - 5: A very bad @$$ image of the latest form of Darkseid by Dave Finch, I love the detail and the Kirby Crackle.

Superboy Prime Variant Cover Art - 5: At first sight I hated this cover, because I hate Superboy Prime, but after reading the issue, I have new respect for the cover, and it is rendered so well.