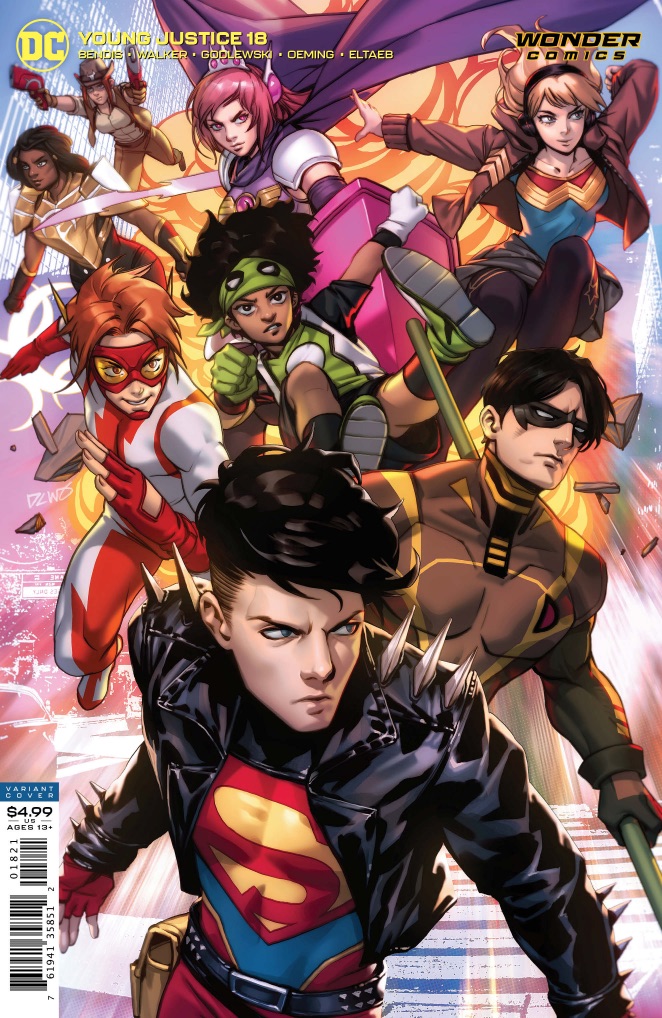 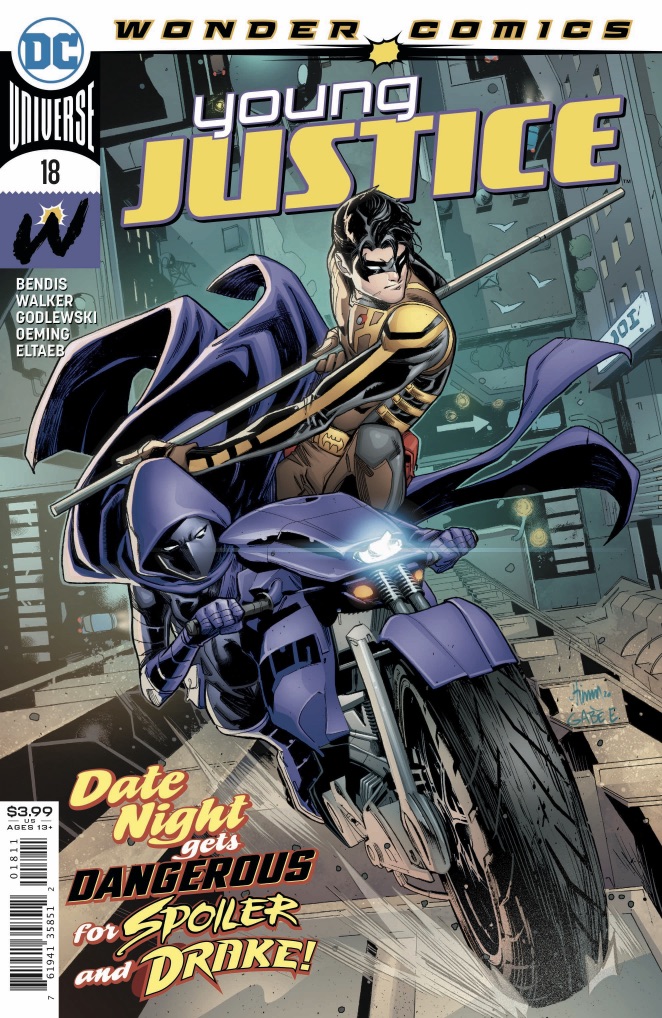 Scheduled to arrive in stores: September 1, 2020

Reviewed by: Tony Parker
Click to enlarge
Stephanie Brown/Spoiler and Tim Drake/Drake meet in Central City to discuss Stephanie's ongoing conflict with her criminal father, The Cluemaster. Stephanie through flashback explains to Tim that even when a mercenary named La Tombe attacked her, he didn't bother to leave his evil life behind, and she has given up on saving him, hoping to exact vengeance for his misdeeds. Tim tries to persuade her not to take this path.

After Tim contacts Young Justice, he and Stephanie invade Cluemaster's HQ, and Stephanie manages to beat her father to a pulp. Before she can cross the line, however, the rest of Young Justice sans Cassie Sandmark and Amethyst (Conner Kent/Superboy, Bart Allen/Impulse, Jinny Hex, Keli Quintela/Teen Lantern, and Naomi) arrive in time to stop her and send Cluemaster to prison.

A quick fast food break later, with the reveal that Tim has reverted to the Robin name, and suddenly Cassie appears, telling the team that her grandfather Zeus, king of the gods, has gone mad...

Story - 2: So this was probably the second best issue I've reviewed for this book. The score says it all, doesn't it?

I am sure you are all tired of hearing me air out the usual Bendis cliché list, that is as strong as ever, so today I am going to raise a new angle on his writing style and on the decaying corpse that is this book:

What do I mean by that? Well, let's go over the bullet points of what is very much a filler episode in the grand narrative of this iteration of "Young Justice" and expose the cracks in this book.

The issue sells itself from the cover and first scene as a story in the love life of Tim Drake/Drake and Stephanie Brown/Spoiler, who is the focus of this issue and a minor supporting character in this monthly.

Now, this is not by itself a bad thing. Filler can serve as a great narrative tool to expand on a character you can't normally focus on, and Stephanie fills that mark to a tea in this book. Sadly, it's hard to tell why this issue is about this character, or this relationship, or about anything.

After Spoiler and Drake beat up some mooks and keep up the running gag of no one being funny (I must assume it's on purpose by now), Stephanie regales us with the usual Bendis flashback kit of badly angled fight scenes and bad jokes. In the flashback, Spoiler fights La Tombe, a mercenary hired to take out her dad, The Cluemaster.

Now, here comes the interesting part: when the fight ends, Stephanie remarks that she had been hoping that her dad (who saw the whole thing) would finally snap out of it, realize he had put his daughter in mortal danger, and step out of this super villain life. But he didn't, and Stephanie craves revenge, while Tim of course tries to convince her not to kill him.

This is genuinely good, no strings attached. It's an old plot point for sure, especially when Batman characters are involved, but it doesn't fail as a moment. Stephanie's anger is more than understandable, and Tim's insistence for the contrary is perfectly in character. For once in this book characters behave like people, respond as they would, make good points, argue. It's refreshing, and it even had me invested in what was going to happen next.

For a brief, golden moment, this issue was on the right path.

So of course Bendis had to trash it. After a baffling sequence in which Cluemaster comes off like a whiney loser about how hard it is to be a dad, coupled with Naomi being told she's great but still not explaining to me why she is (or what her powers are even, I think energy based?), Conner just... kind of being there, and Jinny Hex, who actually has a parent who's integral to her story, not even connecting to Cluemaster's parent monologue and just making a joke about missing her podcasts to Drake (poor Jinny is wasted in this book), we see Tim and Stephanie attack Cluemaster in his HQ.

This "battle" between Stephanie and Cluemaster is more akin to seeing Batman destroy that goon in the recent "The Batman" trailer. I want to make it very clear that my problem isn't that Stephanie is a girl, since if this was Tim doing this I would have the same problem. Cluemaster is the Joker to Stephanie's Batman. He is her archenemy in every way. Even if you don't have many pages left, a battle like this should be emotional, should carry weight. Her whole arc has been leading to this moment, the moment where she confronts her own FATHER for mistreating her in ways no parent should. At the very LEAST there should be some tension.

Instead, after Cluemaster points out that her stick won't be enough to take him out, Tim sucker punches him with a robinarang, and Stephanie takes him out like he's made of putty. It's... It's embarrassing.

Young Justice come in just before Stephanie can kill Cluemaster, and it feels like Bendis needed to leave us off with two trademark slaps to the face before we were done, with Naomi of all people lampshading that Young Justice didn't need to come (IN THEIR OWN BOOK) and then Superboy pointing out that Tim had reverted back to being Robin (something I do like) and stating that they were going to give him an intervention. Why does this piss me off? I don't know, maybe because back when Tim chose that name in this very book everyone including Conner said that it was the coolest name to ever exist, and there is no way Bendis didn't just do this to back off because he can't take criticism.

I am so tired of this book. I won't stop reviewing it (someone has to), but I am so tired of how Bendis is handing in first drafts of comic books, inklings of brilliance buried alive by a mediocrity of the highest degree. Mr. Bendis, I ask you this with the utmost seriousness, I ask you to look deep down within yourself and tell me:

Why does this book exist?

Because right now, this book is like Cluemaster: A blubbering mess of half baked ideas lying beaten on the ground by overconfidence and incompetence.

Art - 3: Passable as usual, the only real bright spots of this average art were Michael Avon Oeming's Bruce Timm style art for the flashback. It had a sort of fun, retro look, and added to a poor sequence. But as usual, there is not much to say about the art here (though I did like how Stephanie looked when she fought Cluemaster, the poses were quite dynamic and made her feel very powerful!).

Cover Art - 2: The date night motif feels weak as it is, and the cover is mediocre and by the numbers, with poses you can see anywhere. I'll admit that seeing the Spoiler costume on a cover sent me back to my early days collecting comics, however, in a Robin issue from the War Games arc where she fought Black Mask, so that was nice.

Variant Cover Art - 4: I actually really like this one! A nice anime esque style of the main team members, Wonder Girl especially looks great! The personalities mostly shine here, it's quite a peach of a cover! Would make a good poster, in my opinion!