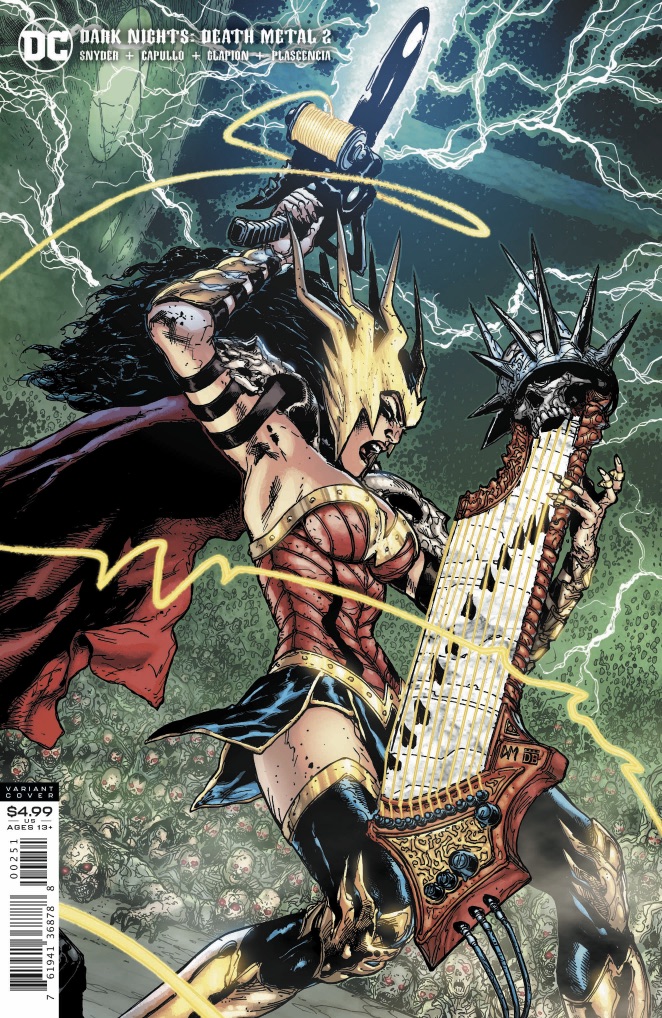 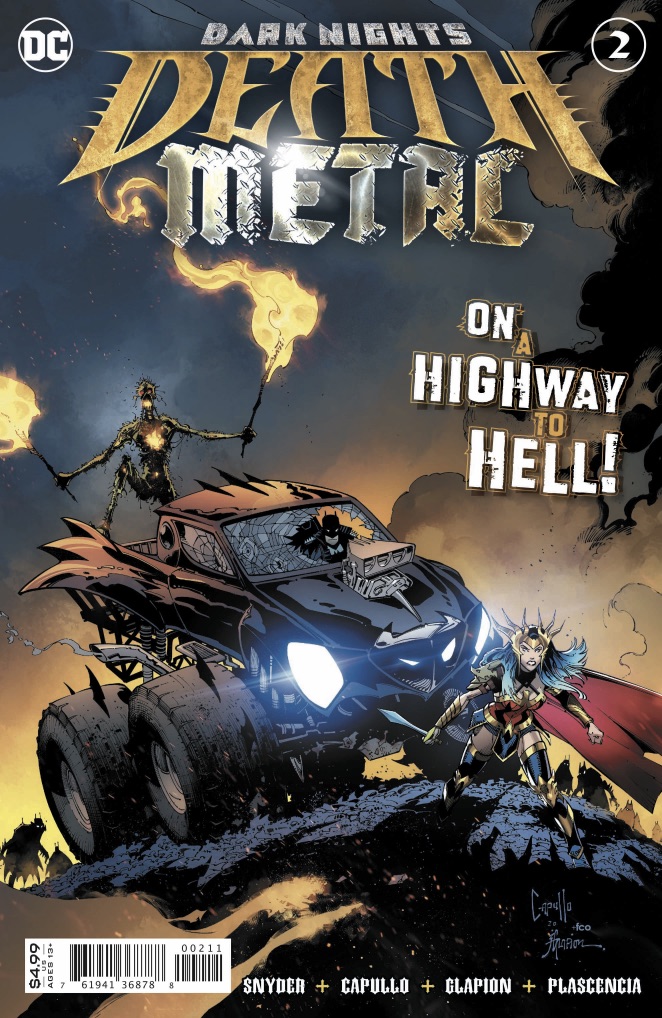 Reviewed by: Keith Samra
Click to enlarge
We open with Wonder Woman, Wally West, and Swamp-Thing travelling to the Valhalla Cemetery, guarded by the quartet of the JSA Alan Scott, Jay Garrick, Ted Grant and Dr Fate. They find Batman there also, as he readies an army of fallen warriors.

Batman tells Wonder Woman plans to use this army to take Castle Bat to make a new Earth. Wonder Woman tells Batman that they instead should make a new multiverse, by travelling to the Dark Multiverse, to the original crises, take back the energy taken by Perpetua, and give it to Wally West, so he can defeat Perpetua and give birth to a new Multiverse. Barry Allen turns up, and explains that he has not been able to escape this worlds present, as he had been trying to do the very same thing.

Meanwhile the Dark Knights Transfer TBWL's brain into a Doctor Manhattan version of Bruce Wayne, and he is reborn, he speaks with Perpetua, and then destroys all his Dark Knights, all except of his Robins, whom he gives the name, The Robin King. He himself takes on a new name and form, calling himself The Darkest Knight. The TDK knows of Wonder Woman's plan of restarting the multiverse, and plans to make 52 more Earths of pure nightmares.

Wonder Woman, Barry Allen, Jonah Hex, Harley Quinn and Batman travel to the old Toyman's workshop, where they find a giant ship in the guise of a giant mech robot, composite Superman/Batman and Wonder Woman and plan to use it to travel to New Apokolips.

Story - 4: Snyder managed to pack in a ton of story into this second issue of this series, yet the plot only progresses a fraction from where it begins. It felt like there was far too much exposition that it seemed as though we had gone on a side quest from the main story.

However in saying that, I still enjoyed it quite a bit, as Snyder has created a world that is so rich and full, and we have only really managed to scratch the surface of it.

The main takeaway in this issue was the evolution of TBWL, who is now known as The Darkest Knight, as he wields the powers of Dr Manhattan. I liked the fact that he now has such immense power, that he can reshape almost anything with a thought. Weather he has them to the extent that Dr Manhattan had, as a being that experiences all time at once is something we still don't know. But I feel Snyder can and will take this to new levels.

Though I hate to make the comparison, I feel I need to make mention of the fact, that this series and the two that proceeded it (Dark Knights: Metal and Batman: Last Knight) have created DC's answer to the "Spider-Verse". It seems that Snyder has created a sub universe around Batman alone, which just leaves me a little jealous that no one has done the same with Superman to this level.

Speaking of Superman, yet again, he was absent from the main narrative, which I know is only building up anticipation for him and the current state that he may be in, but still left me a little disappointed in not being able to see him yet.

Of course if there is a reality altering, alternate timeline or a crisis, then a Flash must be involved. And this issue featured three of them. I'll admit, I did enjoy seeing Wally be a bit more like his old self, and not carry the guilt that he had in the Flash Forward storyline, and I was a little disappointed that Barry showed up, but to his credit, Snyder made stellar use of him. I loved that line "there is no way out of the present", which tells us that a larger power (possibly those mentioned that are like or is Perpetua herself that is keeping this horrific timeline going).

Lastly I want to touch on the tone of this issue. In the first book, I felt Snyder had established a (2015) Secret Wars like reality with touches of horror elements and some comedic beats, all the while keeping with his usual writing flair. This issue I feel he let loose on the comedy a little too much in places, as it seemed like some of the humour was forced. Case in point, "Batom" (Batman + Atom), the name alone is cringe worthy, but the way he meets his doom, as he is seemingly run over by the good guys no less. Then there is the joke that Swamp-Thing makes. I really hope that Scott Snyder is not under the pump like Zack Snyder was, and we get a "Josstice League" situation here also.

All in all, I am enjoying this series so far, and even though there is very little Superman in it so far, I still recommend giving it a read, if you have enjoyed Snyder's past work.

Art - 5: I feel that Greg Capullo is having an absolute blast illustrating this series. It definitely plays to his strengths of stylised character designs and a fair bit of horror elements, Sometimes the art felt a little uneven, as some panels featured a lot of detail, and then others had very little. This may have been a conscious choice on his part, but it was noticeable at times.

I absolutely loved his rendition of the JSA, Capullo really made them look their age, all the while still look as powerful as they're meant to be. For example, they all had slender builds, but all stood tall in the establishing shot of them.

Other characters such as Swamp-Thing and Wonder Woman have really good designs, and are visually pleasing to see what Capullo is doing with them. I have always found Wonder Woman with a cape a little too overly accessorised, however Capullo makes it work.

I wasn't a big fan of TBWL's final form of The Darkest Knight, it seemed a little too Venom/Carnage like. His second form after he settles into his new body was more interesting.

I had a SMH moment at The Composite Mecha Robot, but then I remembered that Jeph Loeb and Ed McGuiness did it much worse many years ago, so I just accepted the fact that this story really can and will go in any direction.

Jonathon Glapion managed to work wonders over Capullo's pencils, and gave much more depth to the art. I really enjoyed the art more this issue, and Glapion probably has a big hand in that.

The coloring by Fco Plascencia have a rather warm quality to them, as he manages to set the mood for every different location we visit in the story. This issue was a solid A+ in the art dept. for me.

Cover Art - 4: Mad Max is what I was reminded of with this cover, its good, serves its purpose, but nothing that's really captivating to me. I feel that Swamp-Thing is the most interesting character of the three.