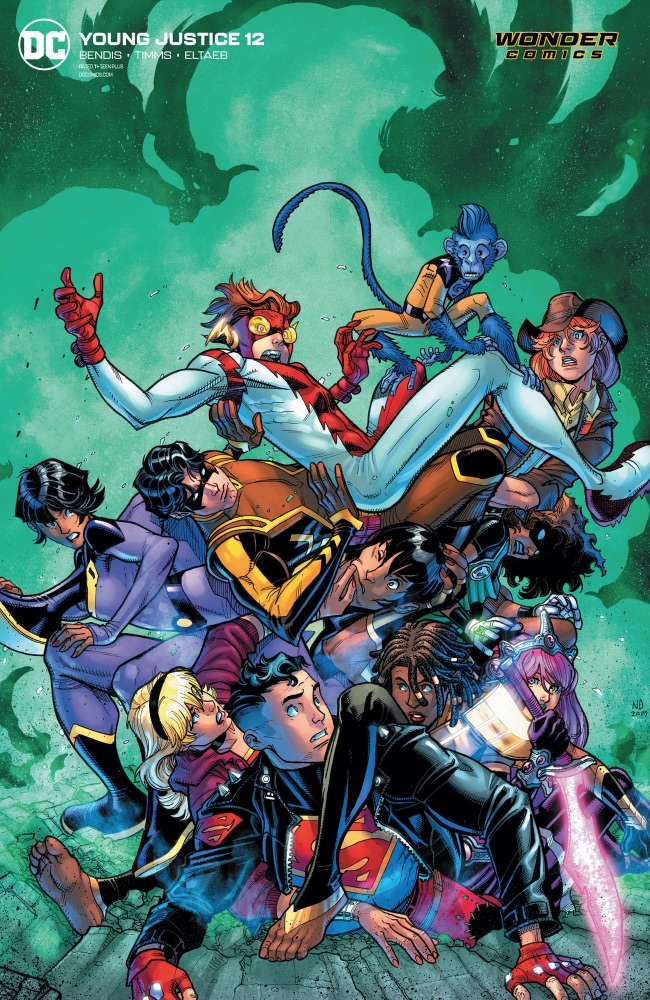 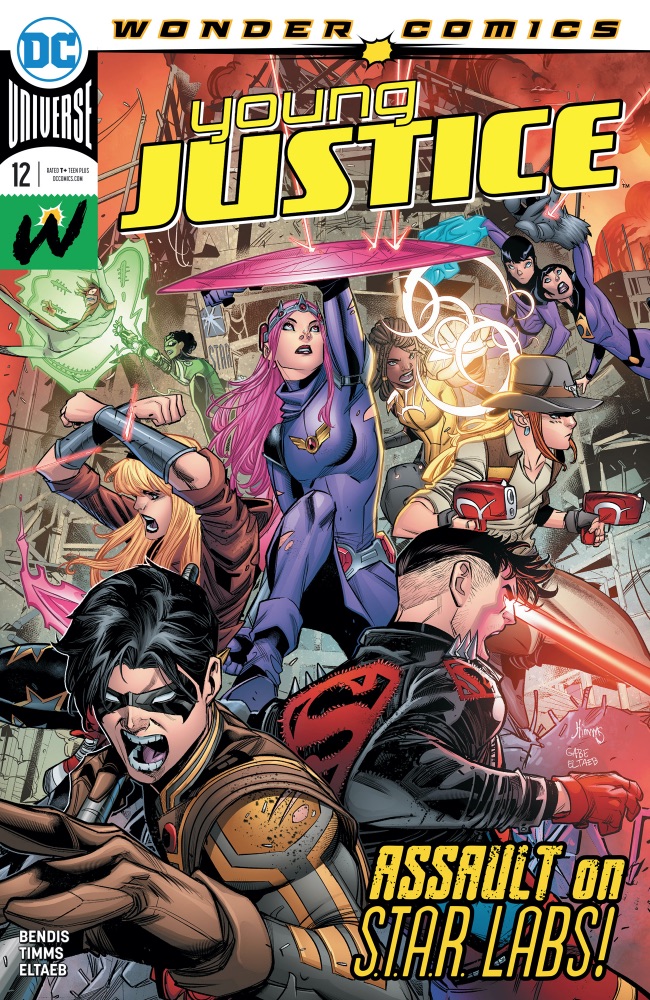 "Lost in the Multiverse" - Finale

Reviewed by: Keith Samra
Click to enlarge
The team is missing Superboy, who is now lost in Skartaris, where he is confronted by Warlord. Wondergirl and Teen Lantern travel to the Hall of Justice, and are confronted by the Wonder Twins who have no idea who they are.

The rest of the team stands around talking, Tim sends Impulse to the Hall of Justice after the other two. He brings them back to the team, they all go looking for Dr Glory and find Superboy.

Story - 3: The title to this issue is "Lost in the Multiverse - Finale" I'm not sure if that's what I read this issue, it's more like "We need a plan" or "Where is Superman and the JL?" or actually, "Fishing for Laughs". This issue really felt like a chore to read.

One of my main gripes has always been that there is too much dialogue, its as if Bendis doesn't trust that we the audience can follow his plot, which is paper thin to be honest. There is way too much exposition, and forced jokes. I get it, the original YJ book was very light hearted and had a lot of funny moments in it, the difference is, Peter David had great comedic timing, Bendis doesn't.

Bendis tries to show us he knows Conner and Tim, Tim's speech about him knowing Conner, and that if Conner wanted to remain in Gem World, he would have told him, and the "... I would have been cool with it, because he's my best friend and I love him" was just so tacky. Again, the too much dialogue argument comes into play. Tim Drake isn't the sort of character that has the need to explain to others his motives, he's more the guy that's "just trust me, I know him". Now I'm not trying to teach Bendis how to write, I am however trying to illustrate that these characters have their own voices, and he should find them.

Conner having a cry to the Warlord was another out of place character moment, sure he would be upset, but he'd never really sit there and cry about it, especially in front of someone. The dislodge in the plot, as Conner has no idea where he is, however Warlord clearly knows that he's Superboy. The Dr Glory subplot is interesting, but ay too decompressed.

Cassie is still underutilized, I don't even know why she is even a part of this team, her only contribution this issue was to remind everyone that she was part of the original YJ, and that she was a member of Teen Titans also. Bart is comedy relief at its worst at times, but there were some redeeming moments, mainly when he knew how to hack the JL computer as Barry Allen.

I couldn't help but laugh at the Leviathan set up, basically Bendis wanting us to read that to know what's happening with the Bat-Family side of things, I couldn't help but feel that he was trying to emulate John Ostrander in the 1980s.

Art - 4: I am still loving John Timms' art, I can't imagine that it would be easy following Bendis script. He does a good job of capturing a teen spirit, but when you have to just draw characters standing around and talking for the most part, I don't imagine it would be too much fun.

I liked the splash page of Conner and Warlord, but sadly it wasn't dynamic enough, and Warlord looked kind of goofy and stiff. He almost looked as if he was attacking Conner. However in saying that, the Skartaris part of the story featuring Conner were some of my favourite thus issue.

Seeing Bart running around was also a joy, I think Timms would do well on a Flash title if he were ever to leave this book.

Cover Art - 3: This cover is good, but there is no context to what is going on in the image, who are they fighting?

Variant Cover Art - 3: Another decent cover, but is certainly played for laughs.