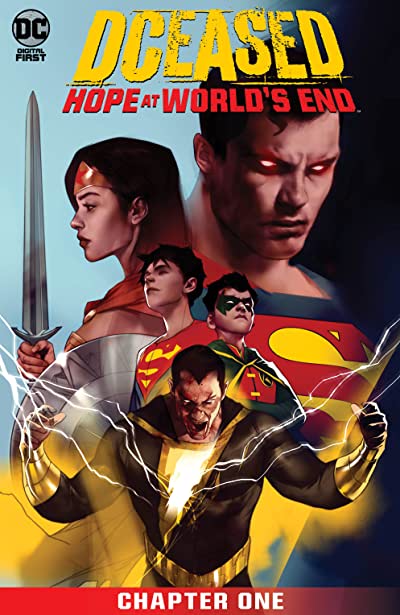 Reviewed by: Glen J. Clark
Click to enlarge
As Jimmy Olsen is hanging up photos of various superheroes, he says "I want them to be remembered".

Two weeks ago, Perry White is looking over a photo he took of Superman punching Darkseid in the jaw. While staring at his computer screen, Perry is looking at the photo on his monitor, and while in the process of praising his work, stops mid-sentence, and turns. Outside Perry's office, co-workers are screaming and they turn as well. Instinctively, Jimmy Olsen begins to snap photos. [Note: In case you missed the DCeased mini series, anyone looking at something connected to wifi was infected with the Anti-Life Equation, a virus that basically turns you into a Zombie-like creature.] Olsen gathers the remaining uninfected to a safe room where he tries to barricade the door from the horde of monsters. Superman comes and asks Jimmy if he can look after the living. In the short time he was gone, the virus took millions of people and many of our heroes. Captain Atom explodes, completely obliterating three cities including Metropolis. We learn that thanks to a new Green Lantern most of the Daily Planet was saved including Lois, her son Jon, and Jimmy among others. Superman tells this new Lantern to take everyone to the Fortress of Solitude while he and the remaining heroes get ready for war.

Next: Prelude to the Anti-Life War.

Story - 4: Around Midnight EST on May 18th, Tom Taylor teased his followers on Twitter with a single image of Jon, Damien, and a female I honestly have no idea about, with the words "I want them to be remembered".The next morning Chapter One appeared on DC's digital platform app. Tom Taylor is the GOAT when given an empty sandbox and the freedom to go wild. He wrote the majority of the acclaimed Injustice series, another digital first series that was based on the video game with the same title, and the original miniseries DCeased. This story is actually supplemental material that fills in the gaps from the DCeased series that came out last year. The story is told through the eyes of Jimmy Olsen and really adds to the overall established material that preceded it. If you were a fan of the miniseries, be sure to check out this digital exclusive.

Art - 3: Dustin Nguyen has a very unique style. I first saw his work on a project called Lil' Gotham and his art really captured the essence of that book, but here the art was either really spectacular, or quite frankly really not. But truth be told, as a fan of the original series I was too emotionally involved in the story to allow the art to distract me from enjoying this story.

Cover Art - 3: Let me explain, it's stunning. There usually is a pattern with these chapter digital stories in that one cover will last a few issues to tell a single arc in a bigger story, however we learn that this was not the case here when we get to Chapter Two. So why a three? Two reasons... One is petty, there are characters on the cover that never make an appearance in the first chapter. The second is the expression that the Man of Steel has. The red eyes, while I am usually a fan of, just doesn't work here for me. Also the way the artist portrays him here, it is as if he has already fallen victim to this Anti-Life equation threat. But these are personal reasons, the overall appeal to this cover will probably appeal to the masses, just not me.