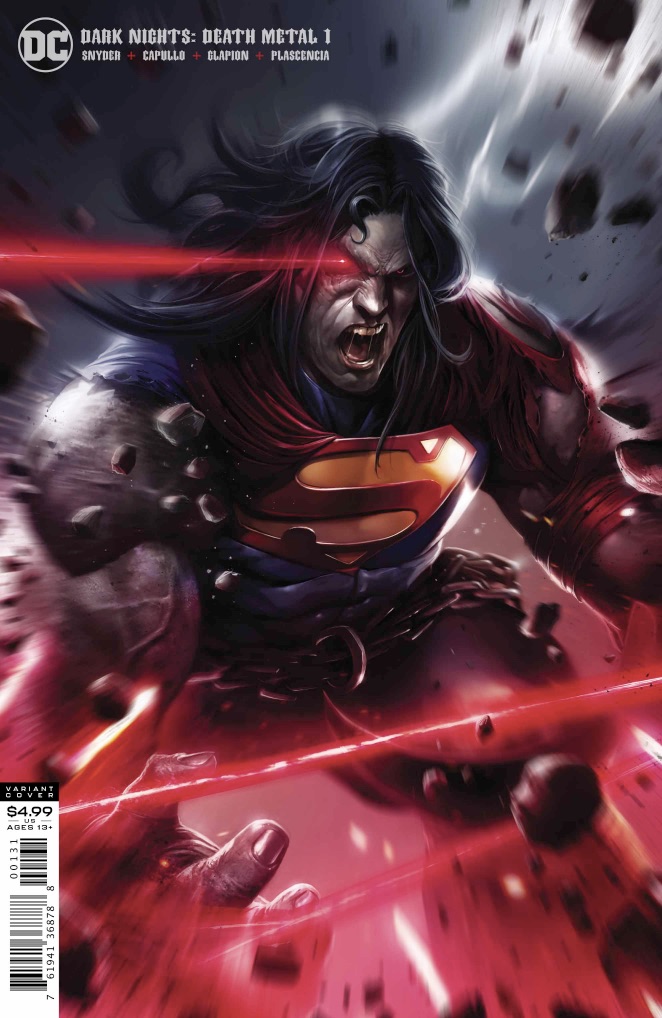 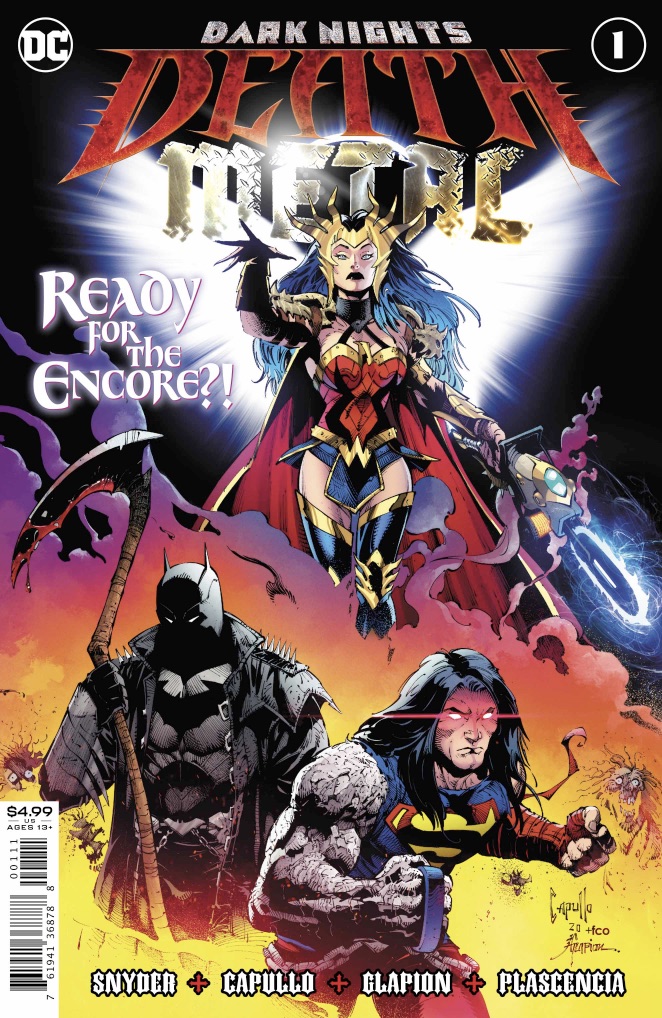 Reviewed by: Keith Samra
Click to enlarge
The world has been consumed by the Dark Multiverse. Villains and heroes alike are jailed in the Arkham Wastelands by Wonder Woman. Castle Bat is run by The Batman Who Laughs, a new prisoner is bought down to Wonder Woman, to be locked up in the lowest parts of the Waste Lands, one that has a past with Wonder Woman.

A rebellion led by Batman, a half bodied Sgt Rock and Superman, who has almost given into the Anti-Life Equation.

Story - 5: Spinning out of Dark Nights: Metal and the follow up series, Scott Snyder has now transported us to a world where the bad guys won. Unlike DK: Metal, this tale takes place in the future, where The Dark Multiverse managed to overpower our universe, and throw us in a world that is twisted and dark, and all hope is slowly melted down, like Wonder Woman's invisible jet. It's a post-apocalyptic world, but one that has come about from stories previously from Snyder's other runs and series.

What I liked most is, even though this is a sequel, it feels that it can be a standalone story of its own. Snyder sets up the story with enough exposition, so you won't get lost, and for those that have been following along since DK: Metal, we get to see and experience the evolution of the story, to what will be its natural continuation (I doubt that Snyder will conclude the tale just yet). And let's not forget the title... The Anti Crisis. What great wordplay, and how appropriate that it's a DC event, one that precedes the coming Crisis event in the near future.

Even though it's dark, which is in the name, it's not without humour, which I absolutely loved, as the T-Rex Batman is mocked about his tiny arms by Wonder Woman. It was surprising enough to see that Snyder had created another Dark Multiverse Batman, one whose consciousness was uploaded into the robot T-Rex, but to actually take the micky out of the fact that his arms are less than appealing, made me laugh out loud.

We only catch a glimpse of Superman, as he is mentioned by the denizens of the Fourth World, but I liked that Snyder is building up to him, and what his role will be. It is mentioned that he has almost succumbed to the Anti-Life, as we have all seen the promo pics, of his long hair and mutated body, so only time will tell what this Superman has been through, to get him to such a point, and how or if he will be redeemed by the end of the story.

There is so much to unpack, from the likes of BWHL's cabal, to the surviving members of the villain community, Swamp Thing's decaying state, Joker and the rest of the incarcerated inmates of Batman's villains gallery, Wonder Woman's role as a jailer akin to that of Hades, Whatever role Superman has yet to play and of course, Wally West. Snyder has set the pieces on the board, and we the audience anxiously await to see how this all plays out.

With the demise of The Batman Who Laughs, I feel Snyder will be upping his game, and giving us a tale with much higher stakes. I love that he has created his own little world within the DCU that follows his overarching story that builds from Final Crisis (see DK: Metal), New 52 Batman, Dark Nights: Metal, Justice League, Batman: The Last Knight on Earth and now this. Not since John Ostrander in the 80s have I found someone that has been so dedicated in creating his own little corner within the current continuity, to further their narrative. I'm really looking forward to the next issue, I have full faith that Snyder won't disappoint.

Art - 5: There is a strong 90s nostalgic feel to the art, or maybe that's just how I associate Greg Capullo's art in my head, and even though the nostalgia is strong, the art is exceptional, and we could expect nothing less from the man. Greg's art as had a massive resurgence at DC over the last decade, and he still is one of the best in the business.

The fact that Capullo doesn't shy away from the cartoonish aspect of his style, is one of his many great strengths. The way he renders the characters in this post-apocalyptic/parallel dimension, really plays to the strengths of the world that Snyder has created in this series.

Capullo's character designs are as perfect as they are bizarre, which again serve the story rather appropriately. I loved his depiction of the prison warden Wonder Woman, as well as the rebel Batman, in his Nightmare Scene inspired look from "Batman v Superman: Dawn of Justice". And let's not forget Superman, and the fact that he has almost given in to the Anti-Life Equation, which would explain his mutated form, and the killer long hair.

What are really charming are the side characters, whose particular look really gets your imagination pumping as to what could have happened to them. Swamp Thing, Harley Quinn, Man-Bats, Joker, Sgt Rock and let's not forget the T-Rex Batman. I'd also like to add that without any other context from recent storylines, we see that Wally West has some connection and semblance to Dr Manhattan's powers, simply by the added symbol to his forehead.

I won't deny it, one of the biggest reasons I requested to ask review this series, was because of the art, and getting to critically analyse a Greg Capullo project. I have been a fan since his days on Spawn in the 90s, and couldn't pass up the opportunity to actually review one of his series.

The coloring by Fco Plascencia have a rather warm quality to them, as he manages to set the mood for every different location we visit in the story. This issue was a solid A+ in the art dept. for me.

Cover Art - 5: We have seen this cover a few times already, as it has been used for promo pages, it's a great composition, I love the themes of divinity with Wonder Woman, Grim Reaper Batman and the "Cursed Warrior Superman".

Variant Cover Art - 5: I like it, because Superman is still a mystery in the story at this point.

Variant Cover Art - 3: Not a fan of this uncoloured gimmick for a cover.