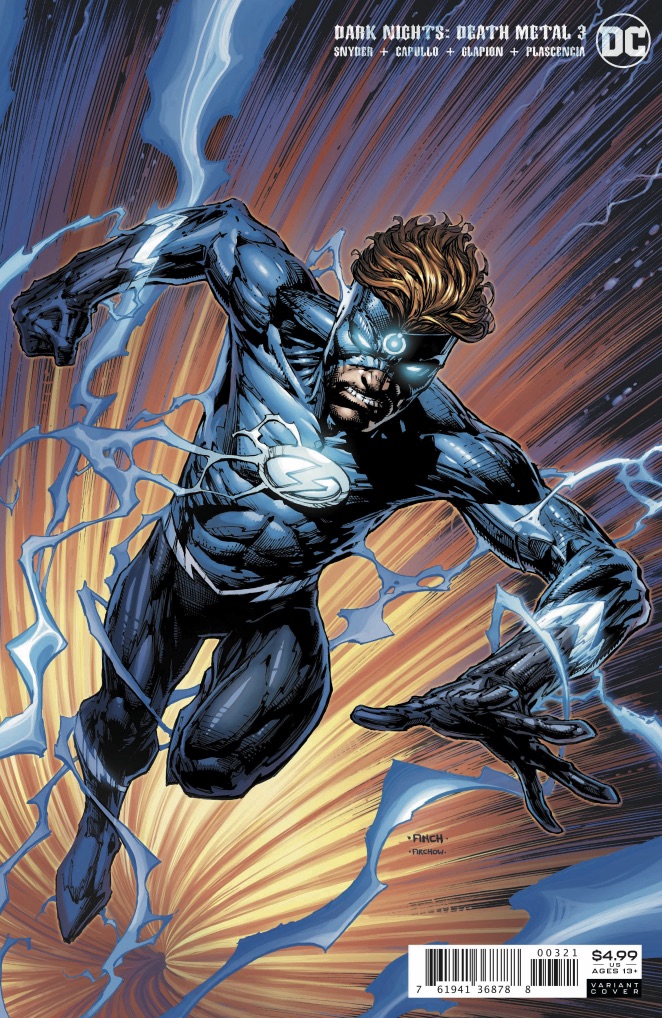 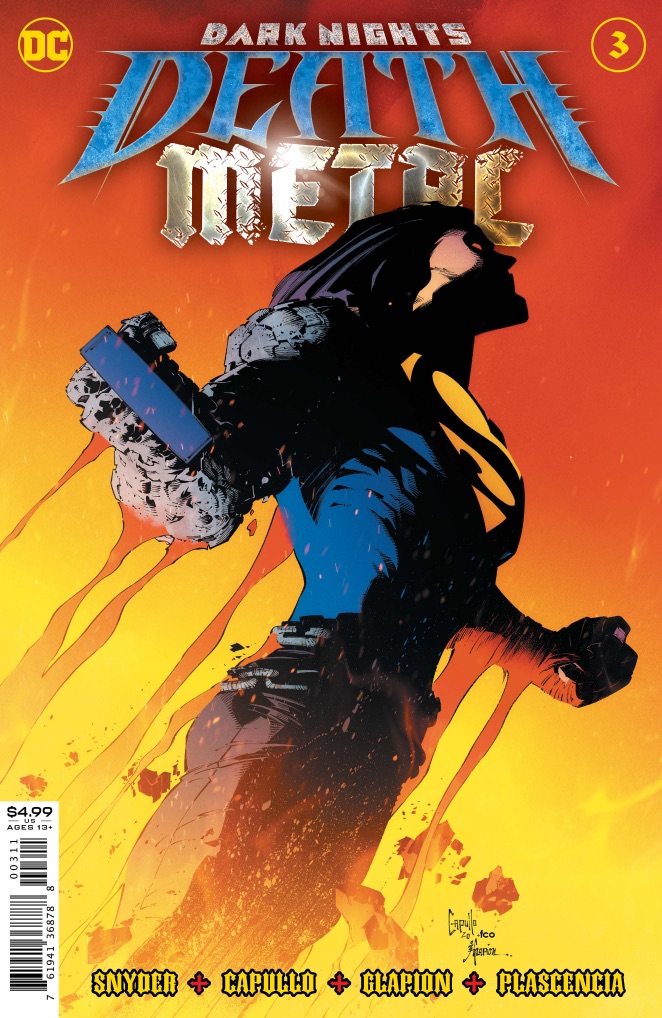 Reviewed by: Keith Samra
Click to enlarge
We begin with Batman, Wonder Woman, Harlequin and Swamp Thing on Apokolips, in their attempt to free Superman from his solar prison.

They manage to get to Superman in time, and with his help, they take down the new ruler of Apokolips, Darkfather. However after a long exposure to different shades of Kryptonite, Superman's solar cells have been damaged, and he is no longer the strongest hero anymore.

TBWL's in his new form, visits the Flash's, in an attempt to suck the Anti-Crisis power out of Wally, and he chases them, as they run for their lives literally.

With the help of Superman, Wonder Woman and her crew manage to liberate the heroes that were being held on Apokolips, and they are all given their task as to what to do next, in order to end this nightmare and restore the multiverse.

We end with Lobo killing off the denizens in the fifth dimension, as he finds what he is after. It's revealed that he has been collecting all the "death metals" for his benefactor, so that he can reshape the multiverse how he sees fit, and that person is none other than Lex Luthor.

Story - 4: As usual, Snyder managed to pack in a ton of story into a single issue, so much goes in in this book, that other writers would split into 2-3 issues for their pacing.

I liked that we begin with our heroes already at their destination, so that we could get to the story so much quicker. In terms of the tone of the story, I still feel a little confused as what Snyder is going for, an epic Crisis level story, a comedy or a straight out alternative\parallel universe horror story. Regardless of what it is, it feels that Snyder may be struggling to keep it all together. The Robin-King explaining how his plan to take down Barry, was to use his dead mothers corpse was a little more than disturbing. Also the "Bat Blocker" which cancelled out Darkfather's blast was a little campy, but in the same scene, was a great use of the Black Lantern ring on Superman's dead cells. With that said, I must add that I did enjoy reading this issue very much, and made me think back at its predeceasing stories, and that it is evident that Snyder did have a massive story in mind that he was keen to tell.

I can't say that I really like the fact that Superman has been depowered for the sake of the tale, but it is forgiven, as the other 2\3 of the trinity is similarly affected.

Why the rest of the heavy hitters of the Superhero community needed rescuing the way they did is beyond me. There were at least five Green Lanterns there, as well as Martian Manhunter and Supergirl, and that's not counting the likes of Firestorm and Mr Terrific. Im sure they could have found a way to free themselves if they really put all that "power" to good use.

I did enjoy the way Snyder handled Superman, and the way he explained his power loss, I love when a writer can use the science of comic book logic to further the tale, in this case how the different shades of Kryptonite destroyed Superman's cells, and that he was being prepared to be subjected to the Anti-Life Equation, and become the next Darkseid.

The reveal that Lobo is working for non-other than Lex Luthor was a nice surprise, as who else would feel qualified to reshape the multiverse other than a narcissist like Lex, and who better to gather the remnants of Death Metal, than the main man.

This story does feel that it will play an important role in the coming Crisis, which has been hinted at in many different books, most notably in Young Justice by Bendis. But rather than another Crisis, this story could prove to be the perfect vessel to set things right, however that may not be in the grand scheme of things at DC right now.

Art - 5: Greg Capullo again did himself proud with yet another issue beautifully rendered in his quirky yet hyper detailed style. From the first page of the heroes' arrival on Apokolips to the last page, with the reveal of a scarred Lex Luthor, Capullo manages to render a tale that only the mind of Snyder could conjure up. The art is a great mixture of horror and fantasy in a superhero package, which gives it the most distinct look that this series (and its predecessors) deserve.

Obviously we got to see Superman in action this issue, but we also got the revelation of his mutated form, as his right arm has become to look like Darkseid's. I also loved the long hair, and the way it was styled\drawn, there will be no comments about him rocking a mullet here.

I liked the extra bells and whistles that Batman wore on his costume this issue also, it gave him that style of being prepared for the mission ahead. His wonder Woman also looked amazing, and the new look is really growing on me. The art is a perfect marriage with the writing, which makes this story a much better read.

Jonathon Glapion managed to work wonders over Capullo's pencils once again, and gave much more depth to the art and the coloring by Fco Plascencia is great as usual, however they do feel a little dull at times. Maybe it's missing a lot of depth in the backgrounds with the large flat panels.

Cover Art - 5: I like the cover, mainly because it features Superman, and this would be the first full appearance. I like the use of shadows and negative space, which Fco was able to add to.