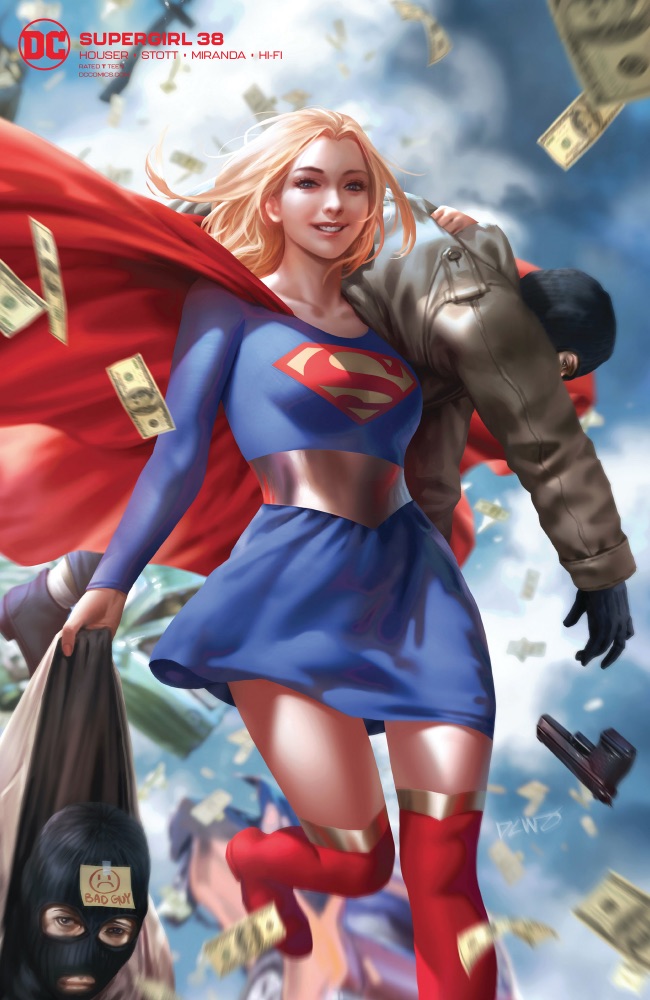 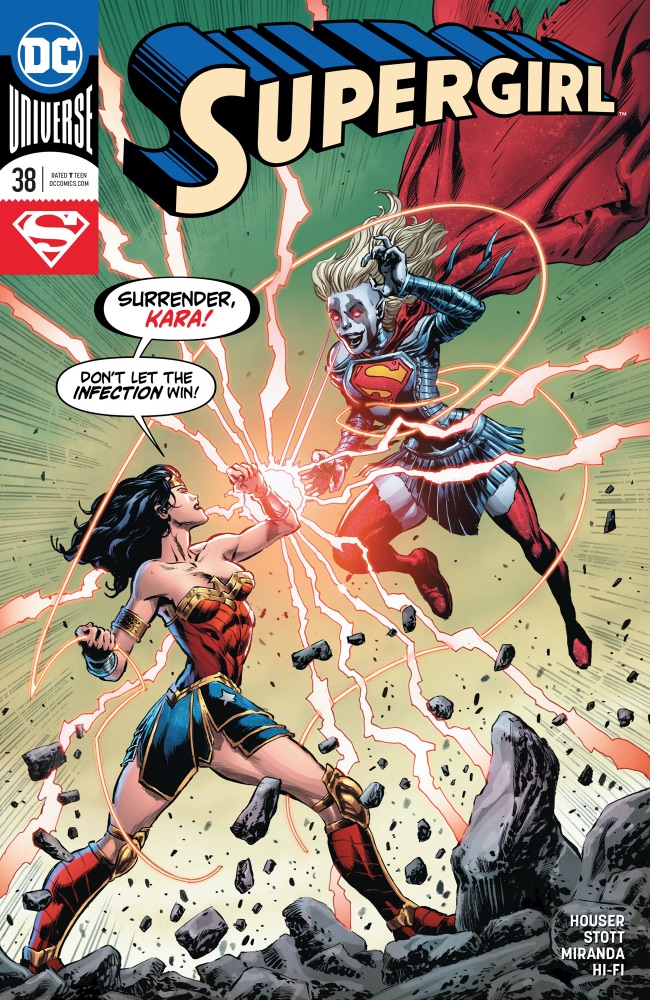 Reviewed by: Adam Dechanel
Click to enlarge
Krypto hunts down Kara and discovers that the infected Girl of Steel has set up a base in Smallville. He discovers Kara is maniacal and has stolen tech from Superman's Fortress and plans to use it to infect the general populace, starting with the community that raised her annoying cousin.

Batman and Superman are hiding out in the Fortress of Solitude tracking Krypto. When Clark discovers Kara is in his hometown he makes it clear that he intends to save his cousin but Bruce reminds him that Kara is one of six infected and if they draw attention to the fact their friends are carriers of a disease it could have severe ramifications for the superhero community.

Clark agrees on the understanding that the only other person powerful enough to reach out to Kara does so without killing her.

Supergirl keeping incommunicado fails as the impatient heroine crashes into Smallville Public Library in full view of several phone cameras. Kara's display of bravado has the opposite effect and instead of recruiting followers the townsfolk they turn into a raging mob.

Before Kara can turn violent Wonder Woman arrives and protects the crowd. The two women fight as Diana tries her best to reach the real Kara's personality buried deep inside the infected creature.

Brute force and powers are an even match with neither woman backing down. Diana remembers that Kara shares Superman's vulnerability to magic and binds the Girl of Steel with her lasso.

The power of the lasso frees Kara's mind but what happens now?

Story - 2: Poor writing? Poor editing? Last issue Kara was discovered alive by her high school heart throb in a shopping mall but was threatened with destruction when the Batman Who Laughs appears. Firstly, the book leaves a cliffhanger unresolved. Secondly it carries on a story from another book with no recap whatsoever. Thirdly there isn't really any semblance of an actual story. The Krypto and Wonder Woman scenes were a saving grace but how could the writing get so bad so quickly? I can only hope once this arc is over we can return to the high calibre we're used to.

Art - 3: Aside from page 16 where Diana looks physically awkward, the art really shone this issue. I wish the script supported the lively visuals as it was really constrained by the poor continuity with the last issue.

Cover Art - 5: This is a pretty awesome cover. Both Supergirl and Diana in mid-battle look brilliant. I am not a big fan of speech bubbles on a cover but in this instance it really does work.

Variant Cover Art - 4: I like a cheerful Kara but this issue's variant seems a little off. I'm not sure if it's her leg, her height or her hair but although the art is beautifully rendered, Kara doesn't look as 'super' as she does on the other variants.