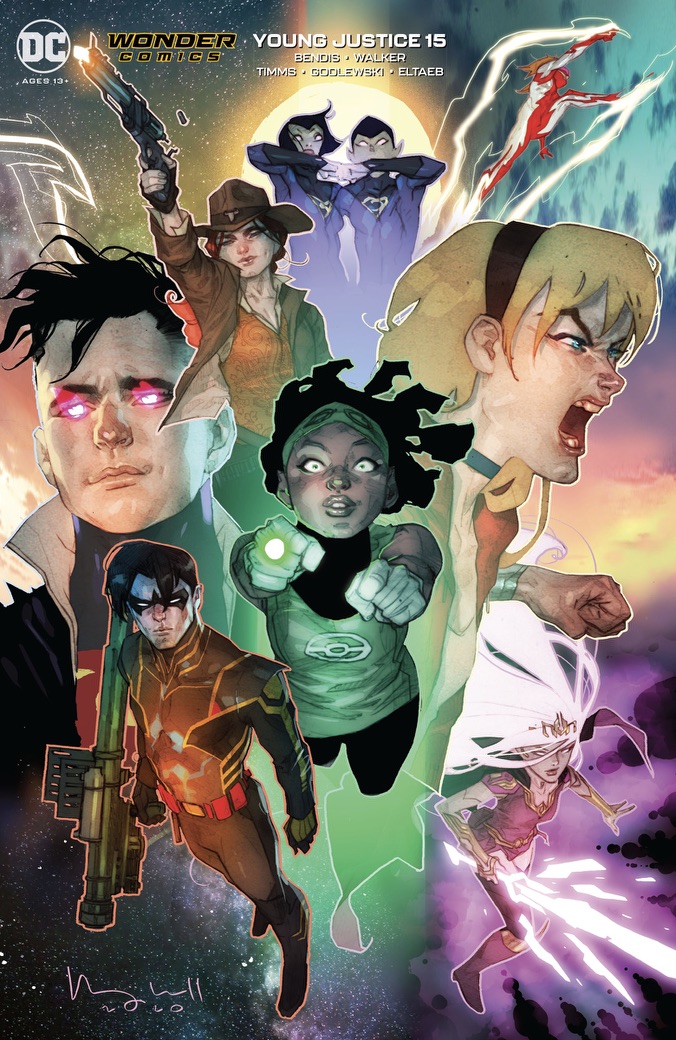 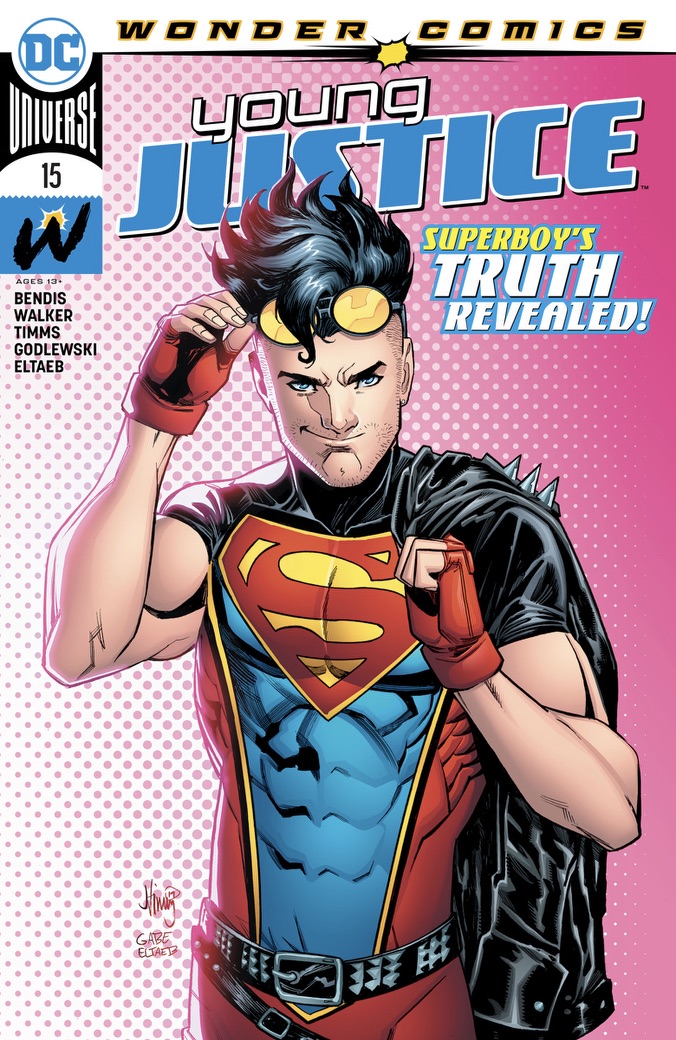 Reviewed by: Tony Parker
Click to enlarge
Superboy, accompanied by Wonder Girl, Impulse and Sideways, confronts Doctor Glory in anger, only for the rest of Young Justice (Teen Lantern, Dial H For Hero, Spoiler, Aqualad, Arrowette, Naomi, Wonder Twins, Jinny Hex, Amethyst, and Drake) to arrive and reassure Connor they're there for him.

After a failed escape attempt by Doctor Glory, Bart explains to Connor and the rest that he has been investigating the mystery of them forgetting each other for a while, and concludes that when the multiverse was changing from a crisis, Connor's exile at Gemworld had caused the world to forget him, and the other "reboots" had also caused him to forget his true origin: That he is the clone of Superman and Lex Luthor.

At first Connor seems enraged, and ready to kill Doctor Glory, but this is revealed to be an act: Connor has finally accepted that he is not alone, and the FBI come in to arrest Doctor Glory.

The dust settled, the original team proposes to include all the newcomers as part of the roster, and maybe even more teen heroes out there, and as the crowd disperses, Connor stops Bart mid run to ask him what he is hiding...

Story - 1: I know, this might seem harsh at first: last issue was worse.

And it sort of was! But... I can't stand the lack of depth, of heart, of meaning this issue had.

First let's start with the lack of events in this issue. Sure, this IS a finale issue to an arc, and it's only focused on explaining to us what happened to Connor, to the universe, and how come Young Justice don't remember each other. At first glance, this seems like a solid idea: This IS the series arc, and after all that has happened, it is only fitting that the issue focuses only on the reveal. But that's the problem with this issue, and the reveal, and it's why this issue gets such a low score: We know the reveal.

We know the reveal.

I cannot stress this enough: this issue is the finale of the first series arc in this ongoing story. The whole 15 issues have pinned themselves on two stories: Connor's abject loneliness and the amnesia Young Justice's original members have suffered. This is why we've been following this story, outside of these memorable and beloved characters. This is the main event, the coup de gras, the cherry on top.

But clearly Brian Michael Bendis' kitchen needs a health inspector check, because he decides to reveal to us a truth we all know: The DC Universe has undergone multiple crises (read: reboots), Connor is the clone of Superman and Lex Luthor and this happened because he got lost in Gemworld.

I don't think I have seen such a flagrant waste of time in a comic book in an eternity. This is bordering on the absurd.

Speaking of absurd, the story has much more of that in stock! From an overabundance of pointless characters worryingly reminiscent of an Ice Age sequel (Aqualad doesn't even speak!), to a decreasing level of importance for the original roster members (Amethyst, Cassie, Jinny, Tim and Keli barely play a role here), from a distinct lack of weight in this arc finale that feels more like an afterthought than an ending, to the gross overuse of Joss Whedon quipiness that causes the book to shoot itself in the foot multiple times, there is no end to the problems contained therein. I find myself shocked that the "#1 Writer in DC" thinks that this passes for a legitimate story.

Ladies and gentleman, I may not be the biggest Superboy fan, or the biggest Young Justice fan. But when a story with a premise this good is so bizarrely wasted, I can't help but shake my head with disapproval at the people behind this book. Perhaps, with a little luck, Bendis will move on, as he will with the Superman title soon. But until then, we are stuck with this book that could have been so much more, but is stuck in a crisis of its own.

Art - 3: So, I will say this: this is a well drawn book this time. Thanks to the warlord planet being abandoned, we are treated to a singular art style that fits our characters (even if it is still a little run by the mill for the genre). That said, I appreciated certain compositions (Superboy's first appearance in page 1, the group shot in page 2 which actually seems natural, the visually informative Impulse spread on page 6 and of course the beautiful call back to Connor's fall to Gemworld on page 8), plus I felt like there were less mistakes and goof ups in this one than last time. All in all, a pretty average but not bad collection of drawings, even a few nice shots to look at!

Cover Art - 3: Not the greatest cover ever, but one that sells Superboy's role in the story quite well, informs us visually of his self acceptance, and contains a pretty cool pose. The pink background is also popping, and it DOES represent what happens in the story!

Variant Cover Art - 1: What a mess. It feels like a 4th grade collage project that was half finished last minute in the cafeteria. The outlines especially are horrendous. Not to mention the cover doesn't actually mean anything outside of being a "collector's item", which it is, if you like to collect badly made variant covers.