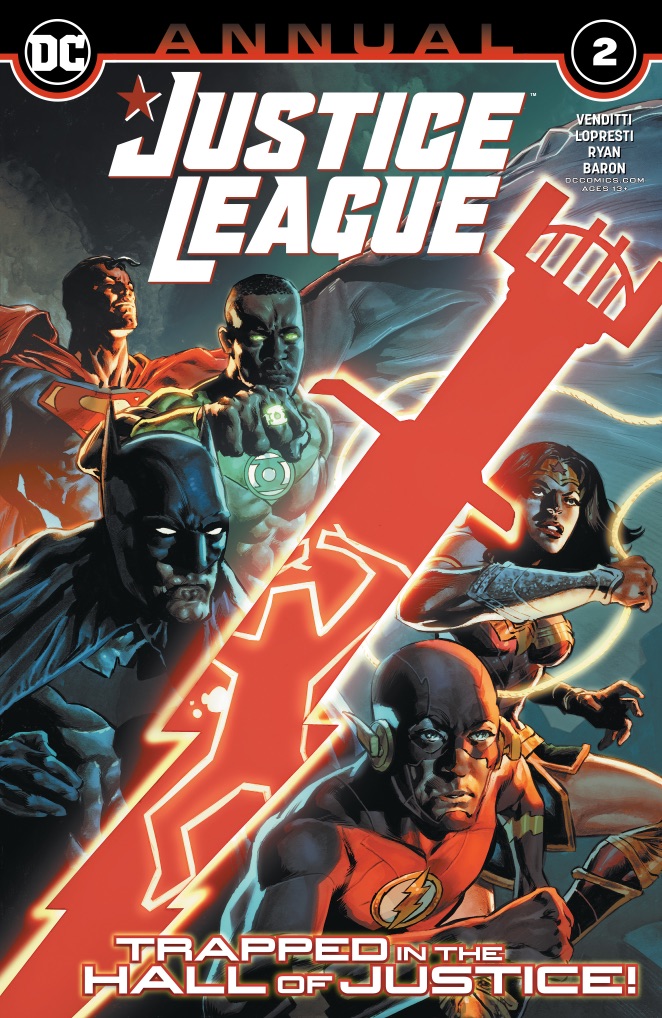 Reviewed by: James Lantz
Click to enlarge
The body of a murder victim has triggered the Hall of Justice's security protocols, using the Justice League's weaknesses against them. They will need to bypass them in order to save themselves. This will will be a really tough job if they don't discover who is behind this attack.

The Eradicator, whose head is in Batman's laboratory, is responsible for the security problems. He created a false corpse to distract the League while he took over all computer systems. However, there's one thing the Eradicator didn't take into account. Teamwork works. The Justice League worked together instead of separately. This proved to be the automaton's downfall as the League was able to stop the Hall of Justice from being destroyed. Yet, victory may be short-lived. Batman has placed the Eradicator's head in cold storage for reasons known only to the Dark Knight.

Story - 5: I feel like this Annual should be placed at the end of Venditti's Eradicator arc. The timing of this Annual's release makes it feel like it's interrupting the flow of the current serial. It should have come out sooner than this. However, it's still a fun, well written story in spite of all that. Some things are left open on purpose. Could Venditti be returning to this title soon? I hope so. I hate when plot threads dangle for too long.

Art - 5: Lopresti's art is pretty solid on this one. He should be doing more JL books in my opinion.

Cover Art - 4: While it's well done, it feels like this cover was not intended for digital comics. There's nothing wrong with that in general, but the image looks odd in a e-book reader, be it on a phone, tablet or computer.