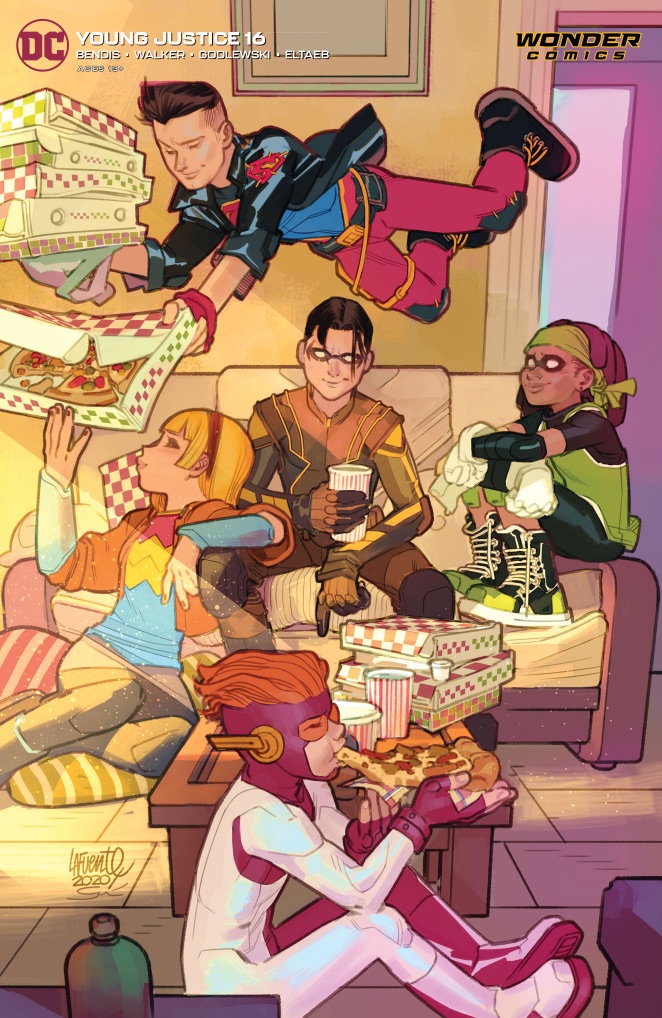 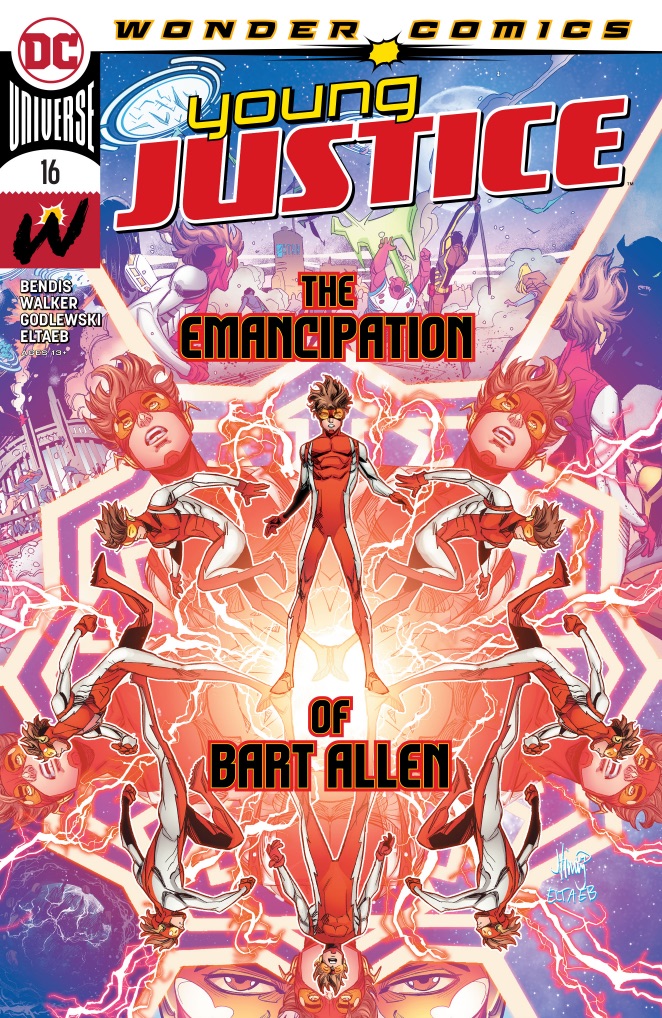 "The Emancipation of Bartholomew Allen"

Reviewed by: Tony Parker
Click to enlarge
After finding holes in Bart's explanation for the collective amnesia the original Young Justice had, Connor Kent tries to get answers from him, but the speedster keeps running away from him and from the past. After a few rounds of super speed tag, Connor is ambushed by another S.T.A.R Labs monster, and the clone fights him off.

After a talk with an F.B.I agent confirms Connor's awful truth that he is truly forgotten and gone from his original Earth, Bart comes back, deciding to finally spill the beans: He had been suffering years of existential dread from his unique, even for speedsters, powers. A battle with Mirror Master forced Bart to run from a place seemingly in between dimensions, leading him to arrive at an Earth where Young Justice was dead, and he was being treated at Arkham Asylum. This horrible discovery caused Bart to run back to his time, only to find that Young Justice was no longer a team. And so, he broke the rules to find Connor and get the team back together.

The story over, Bart admits he doesn't know what to do, but Drake (who had been listening the entire time) proposes they head to the Hall of Justice to get to the bottom of this mystery...

Story - 3: So I am happy to say this was an improvement on the previous issues!

But I cannot honestly say that I disliked this issue. And that is pretty reassuring, to say the least!

I think a lot of it has to do with Bart and Connor. They are clearly the only characters in this series that Bendis has any idea how to write. Connor's angst is the only one in the book to actually hold weight and not drag his character down, Bart's personality isn't sacrificed for the drama of his backstory, and both feel like real, living human beings, instead of the usual props Bendis uses to "drive" his "plots" "forward". For once, there is a real story here with a beginning, middle, and end, and with ideas, themes, character moments and weight. Sure, it's a little fillery, but at the end of the day this explained to me what is going on with the mystery better than the entire issue dedicated to said mystery!

A generous slice of praise must go to Bart's flashbacks, for once proving that Bendis can write a flashback with meaning. Bart's unique powerset, even among Flashes, not only compliments Connor's status with the Superman Family well, but also adds a lot to his role as "Plucky comic relief". Bart is clearly alone, disturbed by the life of a teen superhero and disoriented by his hypermetabolism. His story truly feels tragic, and might be the first time since Connor's Gemworld backstory that the book has managed to truly illicit an emotional reaction.

Is it perfect? No, as I state above, it contains many of the book's usual flaws (special mention to the totally pointless Superboy and Monster fight, that contains bizarre dialogue, flat humor, and only exists to pad the story and pretend that this book still has a semblance of action), but it is with an approving nod of the head that I say that yes, this issue was ok, even a little good.

And sometimes, a little good goes a long way.

Art - 3: Like last issue, the art here is run of the mill (pun not intended), but decent enough to pass for a 3. Facial expressions seem to be Godlewski's specialty, as he manages to wrangle real emotion from Connor and Bart's sadness each time without making it come off as silly (no easy feat, mind you). Added to his usual mastery of portraying the speed force in action, and the colorist's and inker's lovely touches on the Arkham scenes and the campfire, and I would rate this a strong 3.

Cover Art - 4: I ADORE psychedelic covers, and I adore character driven covers, so this cover is a treat! It feels silver age-esque, but with the proper gravitas the story requires, and serves as perhaps my favorite cover of this book so far!

Variant Cover Art - 1: I feel bad for Bixie Matheiu. I am sure they put in a lot of work every time with the variants, but I just can't get into them. I won't deny that this one is slightly better than last week's, but competence does not equal quality. From the slightly odd facial expressions to the mundane scenario that should have been cute to the bizarre choice of characters (if it's supposed to be the original Young Justice, why is Teen Lantern there, and if it's supposed to be this book's original roster, where are Jinny Hex and Amethyst?). Another disappointing variant, sadly.