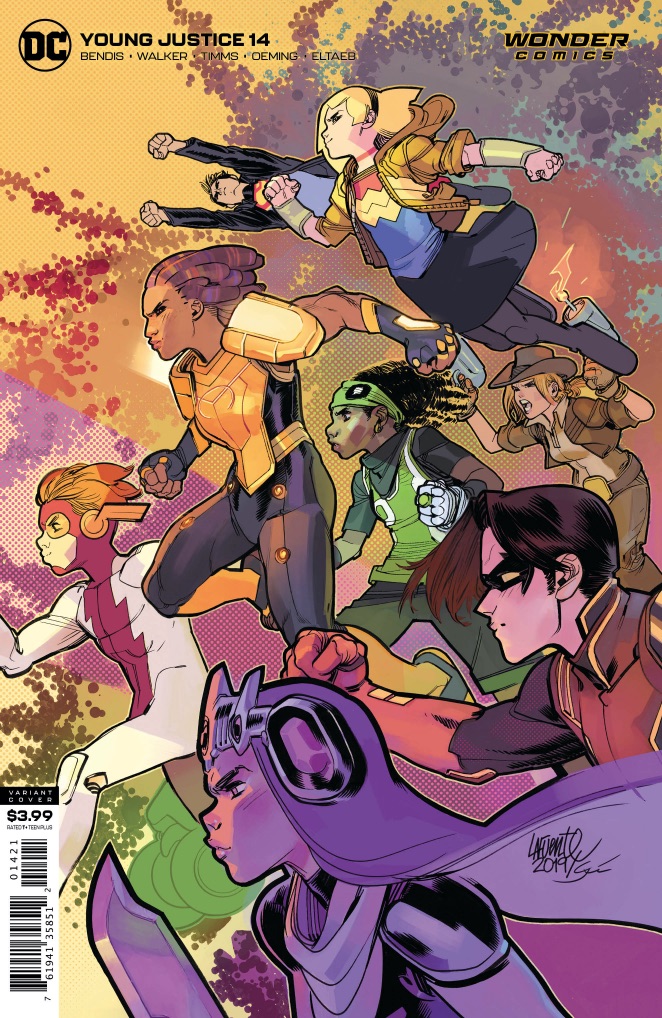 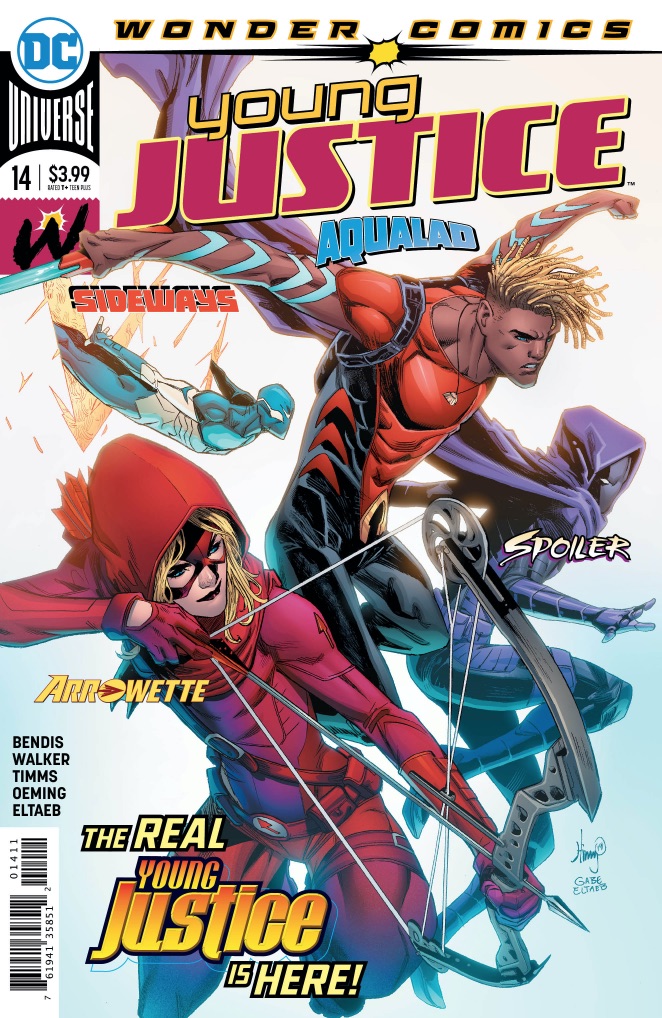 Reviewed by: Tony Parker
Click to enlarge
We get a recap of how Impulse gathered up the "Real Young Justice", comprised of Derek James/Sideways, Stephanie Brown/Spoiler, Jackson Hyde/Aqualad and Suzanne "Cissie" King-Jones/Arrowette, and once he assembles them, the five join Tim Drake/Drake, Cassie Sandmark/Wonder Girl, Amythest, Princess of Gemworld, Keli Quintela/Teen Lanter, Jinny Hex, Jayna and Zan (The Wonder Twins), Gleek, Miguel Montez and Summer Pickens (Dial H For Hero), and Naomi to fight some inter dimensional monsters STAR Labs scientist Doctor Glory is using to stop them.

Meanwhile, on Skartaris, Warlord battles the Green Manaleeshi and his Kryptonite weapon as Connor watches on in pain. Using a communication device, Green Manaleeshi reveals Doctor Glory is his employer and source of Kryptonite. Doctor Glory claims Connor has ruined her life, so now she's going to ruin his by having him murdered, but in the nick of time, Cassie, Bart and Sideways arrive and retrieve him back to their dimension, leaving Warlord hopeful of Connor's safety.

The team then enters the HQ to confront Doctor Glory, but the scientist drops a bombshell on them, by revealing that she knows why they have forgotten each other, and promising to reveal the truth...

Story - 2: How can a story where so much happens feel so empty and meaningless? Well, when you have Brian Michael Bendis, anything really IS possible!

All right, so maybe I'm being harsh. After all, this issue was a small improvement on the previous ones. I mean, stuff happened! But stuff happening just isn't enough, now is it? The fact that the best thing I can say about this one is "Well, it wasn't just talking!" is not a good mark on the rest of the series. So many scenes, so many characters feel like cannon fodder, like they're really just there to fill up splash pages and make everything seem important. Look, there are the Wonder Twins! Dial H For a Hero! The "Real" Young Justice (which is probably not the best title to give to the team that isn't the one you're selling right now)! Even Naomi is here! And they all contribute... Absolutely nothing! Well, except for Sideways, but that's really about it.

It's quite poetic how Impulse, who drives the story along, symbolizes this issue better than the rest; after countless issues of slog, non stop talk and barely any real plot progression or character development outside of the now very rare flashbacks, everything is suddenly rushed through like a speed force storm. While it does take forever for the "Real" Young Justice to be assembled, suddenly Connor is back from Skartaris (and one must wonder what this actually accomplished for his character), Doctor Glory holds the answer to the entire run's biggest mystery in the palm of her hand and is handing it over to the team, and the threat that required 16 superheroes is taken down like a training simulation in The Batcave. It's frankly embarrassing how clear it is that Bendis realized people were losing interest so he just rushed this "arc" like it was nothing.

Now, to be fair, there are moments I like: Moments like Arrowette being recruited to the team, Stephanie saying what we were all thinking about Tim's costume and Impulse's lovely page to himself where he uncover's the pathway to Connor.

But in the end of the day, I cannot bring myself to praise an issue this rushed, this lifeless and this inane. And I can only hope that at some point, a better equipped writer takes this title to the places it should go, instead of running in circles to fill up pages with nothing but sound and fury, signifying nothing.

Art - 2: What happens when a solid but inconsistent and average for its sub-genre art style meets a unique and visually striking but bizarre and illfitting art style? You get this issue. I am no art expert, but from facial expressions that hinder the moment (like Spoiler when she's fighting goons or Impulse when he's talking to Sideways), to every single scene in Skartaris to some bizarre mistakes (like Spoiler barely holding a man's leg after she's smashed him through a table), the whole issue is competent at best, and visually disappointing at worst. I hope they hire someone with a bit more of a visual flair that fits the title, because right now what we have here is a cake being baked by someone who follows the recipe to a tee but forgets the baking powder and someone who misread the order and made steak mignon instead.

Cover Art - 2: Dynamic poses aside (especially Aqualad and Spoiler), this cover is just sort of... There. It does sell what the story is, granted, but there are a million better ways to sell a group pose like this.