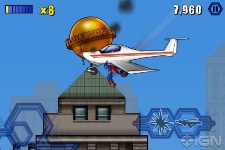 Chillingo and Tiger Games today released an official Superman game for iPhones and iPads. The 18 level game allows players to use Superman's powers of flight, strength and heat-vision in order to earn bronze, silver or gold medals as they attempt to complete each level.

Become Superman to save the city of Metropolis in an all-new adventure for iPhone and iPad! As the Man of Steel, only you can protect humanity with your incredible powers.