Artists, writers and seminars are part of the fun at Superman Celebration in Metropolis June 9-12

Artists have brought a unique flavor to the Superman Celebration for many years. And this year is no exception. Visitors may escape the heat of the street for a unique look at the world of comics inside Artist Alley and Writers' Way just one block from the Superman Statue.

Lin Workman, of the MidSouth Cartoonists Association, is coordinating the efforts again this year. In addition to appearances by Mark Pillow of Superman IV and Tracy Lewis of The Adventures of Superboy, Workman has an impressive line-up of talent ready to educate and entertain visitors to the Celebration.

Click "Read More" below to see the list of artists and writers scheduled to appear at the Superman Celebration, and a schedule of what's taking place at Artists' Alley and Writers' Way during the Celebration. 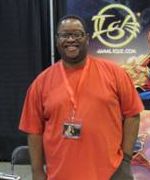 Starting at the tender age of 17, Jamal Yaseem Igle has worked his way up the ranks of the comics industry. He turned a six-month High School internship at DC Comics into a successful 18-year penciling career.

Jamal's detailed pencils have graced books as varied as The Narrative of the life of Frederick Douglas, the all ages action miniseries Race Against Time, as well as mainstream hits such as G.I. Joe, Iron Man, Spider-Man, and Green Lantern. Jamal has served as the series artist for Firestorm the Nuclear Man, Nightwing, and Tangent: Superman's Reign for DC Comics, Noble Causes for Image Comics and a four-issue run on New Warriors for Marvel Comics. In 2003 Jamal co-created the comic book series VENTURE with Dynamo 5 creator/writer Jay Faerber. He's done just about everything from acting on the small screen to voiceovers for commercials, packaging books for Juggernaut Press, storyboards artist on Roughnecks: Starship Trooper Chronicles and Max Steel: MX1 for Sony Animation. Jamal is a volunteer with the Museum of Comic and Cartoon Art, as well as a guest lecturer on the subject of comics and animation. In addition Jamal was also an instructor at the Art Students League of New York, helping create the league's first comic art class. Currently Jamal is an exclusive artist for DC comics. 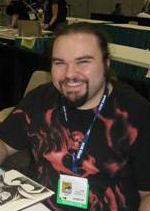 Freddie Williams II grew up in Kansas City, Kansas, though he now resides in Lees Summit, Mo. He started drawing comics seriously from the young age of 15 after he saw a copy of The Uncanny X-man #272 featuring Jim Lee's artwork. From that point on he had his heart set on drawing comics for a living.

In 2005 while attending the San Diego Comic Con, Freddie submitted a portfolio for the DC Talent Search. A few months later he received a call be a fill in artist for Seven Soldiers: Mister Miracle #2, 3 and 4, as well as a fill-in artist for Aquaman #39, from there he was selected to be the monthly artist for Robin starting with issue #149.

Over the years Freddie worked in various art jobs honing his PC skills and learning to work via Photoshop and Illustrator. He had worked traditionally for years with blue line pro art board, non-repro blue pencils and inking pens and figured after what he knew maybe he would combine his love of comics with new technology. He now works completely digitally, only commission pieces and maybe a few pages of his choice from monthly issues are done traditionally. You can see his innovative approach to art in his new how-to book DC Comics Guide to Digitally Drawing Comics. Freddie is currently the artist of the DC Comics series, JSA ALL-STARS. 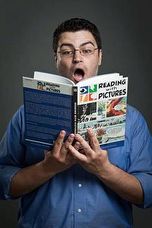 Josh first gained recognition with his creation, Mail Order Ninja, which won the grand prize in Tokyopop's Fifth "Rising Stars of Manga" contest. The series has appeared in graphic novel form and as a nationally-syndicated comic strip appearing in over 45 papers nationwide including the Boston Globe and the L.A. Times.

Josh started his writing career by interning at DC Comics and later became and associate editor for Wizard Magazine. His recent work includes The Batman Strikes for DC and the Star Craft novel line.

Josh also serves as Founder and Executive Director of Reading With Pictures, an educational non-profit organization that promotes literacy and the visual arts through the use of comics in the classroom. Through partnerships with Northwestern University, Diamond Book Distributors and other major institutions, Reading With Pictures plans to revolutionize the role of comics and graphic novels in education. We're currently accepting pre-orders on an anthology of educational comics suitable for all ages set to be released in August. Sales from the book will provide seed money for Reading With Pictures and allow us to move our ambitious agenda forward.

Josh lives in the small, Midwestern town of Chicago, Illinois and can be found online at www.joshelder.com

"Breaking into the Business of Comics"

Martheus Antone Wade and Andrew Chandler have come together to offer an exciting seminar "Breaking into the Business of Comics." The seminar will consist of two parts: Playing by the Rules - Doing it 'Their' Way" and Breaking the Rules - Doing it 'Your' Way". Participants will have the opportunity to have their portfolios critiqued by both artists at the end of each seminar. The free seminars will take place at noon Friday and 2 p.m. Saturday in Carpenter's Union Building, located on the corner of Eighth and Market streets, next door to Artist Alley.

Martheus Antone Wade - Jetta: Tales of the Toshigawa was created in 1985 by Martheus Antone Wade, a graduate of the University of Memphis. Martheus' love for martial arts, along with his talent as a graphic artist, was a natural fit for creating the characters and storyline. He then began his career as an intern at Signature Advertising. After completing his internship, Martheus worked as graphic designer. After two years, Martheus struck out on his own as a freelance graphic designer and illustrator working with companies such as the Radison Hotel, Trust Marketing and Senior Services.

He has illustrated for Maximum CNG, Bloodstream for Image Comics, Shooting Star Comics, Chaos Campus for Approbation Comics and Andrew Dabbs Slices just to name a few. Recently, he has worked on such titles as Action Man and Nanovor for IDW, Marvel Comics Masterpiece card series, and illustrated, wrote, and produced a comic book crossover with his character, Jetta, and William Tucci's Shi. His work has been used for the movie Role Models from Paramount Pictures as well as for the instructional DVD and book, Hi-Fi Digital Color for comics available from IMPACT Publishing. He has illustrated for the Star Wars franchise for Topps Card Company as well.

Some of his clients include numerous churches and non-profit organizations, pet stores, schools, camps, ad agencies, bands, and the military.

He has written and illustrated children's books, comic books, comic strips, and wrote, directed, and starred in an hour long documentary about a fictional super-hero.

Lin Workman - Lin will offer a kids art panel and discuss cartoons as a second language, perspective, foreshortening, action, balloon placement, and character colors and shapes. "Grown up kids" will also be welcome, he says.

Workman is the creator of the web-comic Scared Silly and co-creator of the self-published comic book series Bushi Tales. Over the past 25 years as a graphic artist, Lin has designed tombstones and civic monuments as well as apparel for the screen printing industry. He is also an accomplished cartoonist and muralist whose airbrush work has been published in Airbrush Action Magazine and Amazing Figure Modeler. He has completed murals for Pancho's Restaurant, McDonald's, Haunted Web of Horrors haunted house and Fitzgerald's Casino. He recently provided sketch cards for the Topps' The Empire Strikes Back 3-D and Galaxy 6 card sets.

He served as President and Vice President of the Mid-South Cartoonists Association in Memphis, TN and is a member of the DeSoto Arts Council in Mississippi.

Kevin L. Williams - Williams is founder of Kevin L. Williams Productions and creator of Muley the Mule and Friends (comics and puppets). He has had comics published in local and international publications, been seen in print and video around the world on the internet, appeared on radio and national television, and auditioned with the Jim Henson Company, Sesame Workshop and the Walt Disney Company. Since 1995, he has been editor of MAW Productions' Jetta: Tales of the Toshigawa, and has contributed art and services to works and shows of other friends.

Janet Wade - Having lived the early part of her childhood in Japan, Wade brings a unique perspective in the creative process for MAW PRODUCTIONS. Her skills in photography help in the visualization of projects for the team. She has worked as an intern on projects for Universal Studios, Hasbro, Shooting Star Comics, and Jetta: Tales of the Toshigawa. Janet's design skill has been utilized for both the corporate and multimedia worlds.

Trevor Hawkins - Trevor's work has appeared in "The Margaret Mitchell Story," an NBC television movie; on the set of "Radio T.B.S." at Habersham Community Theatre in Clarkesville; and is on permanent display at Pittypat's Porch restaurant in downtown Atlanta. His sci-fi and cartoon-based artwork has been sold at DragonCon, America's largest popular arts convention.

Tim Brown - Brown returns for a fifth year at Superman Celebration after successfully hosting Fan Films and producing live events at the festival from 2007-2010. Tim, owner and Executive Producer of TCB Video Productions, is a film editor and videographer who has done work for Coca-Cola, The American Heart Association, Komen for the Cure, Maw Productions, Pencil Neck Studios, and for Superman Celebration with tribute videos to both Christopher Reeve and George Reeves.

A complete schedule about Artist Alley activities can be found on www.supermancelebration.net or by calling the Metropolis Chamber of Commerce at 800-949-5740.