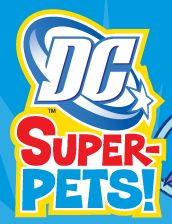 Picture Window Books, an imprint of Capstone, the leading publisher of children's books and digital products and services, announces the winner of its nationwide student writing contest "My Pet is Super!" The contest asked children to write an article for an imaginary newspaper, The Daily Planet, about why their own pet is super. It was inspired by the publisher's DC Super-Pets adventure book series featuring the crime-fighting pets of everyone's favorite super heroes.

Cloey Nyberg, a third grader at Pyrtle Elementary School in Lincoln, Neb., is the first-place winner selected from more than 450 entries. Cloey's fictional characters, Luna Moon (a Beagle with super-sniffing talents) and Sprightly Steve (a Pomeranian/Chihuahua with lightning speed), will be featured characters illustrated by Eisner award-winning comic book artist Art Baltazar in a DC Super-Pets book. Cloey will receive the original illustration of her characters as well as copies of the book, available Jan. 1, 2012 in hardcover and paperback formats.

Cloey's imaginary newspaper article was set in Metropolis Park where Luna and Steve used their combined super powers to save a group of third graders from a brush fire. The city mayor rewarded the canine duo for their heroic deeds with medals and a year's supply of dog treats. To see the winning entry, visit www.CapstoneKids.com.

"Students took us on adventures from Los Angeles to Maine and we learned about the heroic deeds of all kinds of super-pets - from dogs, cats, rabbits, and gerbils, to pigs, goldfish, and even a vanishing chicken. We're impressed with the incredibly talented kids who brought us such fun and well-written stories, and we can't wait to begin working on the DC Super-Pets title with our two new characters Luna and Steve!" said Michael Dahl, Editorial Director of Capstone Fiction.

In addition to selecting a first place winner, Picture Window Books also selected the top 50 contest entries to receive two free DC Super-Pets books, one for the student and one for the school library.

The DC Super-Pets series launched in January 2011, through a licensing agreement with Warner Bros. Consumer Products on behalf of DC Entertainment, with more titles to be published in August 2011 and January 2012. The series illustrator is Art Baltazar who won the comic industry's top award, the Eisner, for his work on the kid-friendly Tiny Titans series. The DC Super-Pets series features the crime-fighting adventures of the pets of favorite super heroes from beloved DC Comics: Superman, Batman, Aquaman, Wonder Woman and Green Lantern. These intrepid Super-Pets - Krypto the Super-Dog, Ace the Bat-Hound, Streaky the Super-Cat, Beppo the Super-Monkey, Jumpa the Super-Kangaroo, and their friends - save the day and foil the evil plans of the universe's most dastardly super villains (and their pets!).

DC Super-Pets is the second project Capstone and Warner Bros. Consumer Products, on behalf of DC Entertainment, have collaborated on in recent history. The publishers launched a successful partnership in 2008 under Capstone's Stone Arch Books imprint to publish DC Super Heroes, an original book series based around DC Comics' iconic characters Batman, Superman, Wonder Woman, Green Lantern, and the Flash.