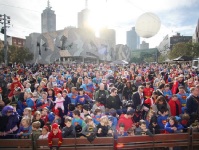 Looks like it's a week for superhero themed world records to be broken this week, with the Herald Sun in Australia reporting on a new world record set in Melbourne yesterday for the most people wearing superhero costumes in one location.

Melbourne smashed the previous record of 1091 people wearing super hero costumes in the one place held by the UK, when 1245 people gathered at Federation Square.

The CBD was no place for bad guys on Saturday with Superman, Batman, Robin, Wonder Woman, the Green Lantern and other comic book heroes portrayed hundreds of times over by people of all ages, genders, shapes and sizes.

Superman was the most popular hero, closely followed by Batman, Robin and Spider-man. The girls were out in force too, dressed as Wonder Woman, Cat Woman, Supergirl and Hawkgirl.