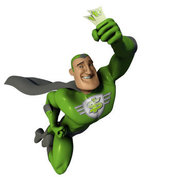 Superloans has defeated DC Comics in their claim that the New Zealand based finance company had breached its Superman trademarks by using a flying superhero (named Buck) as its mascot.

DC alleged Buck was strikingly similar to its superhero and provided evidence of New Zealand sales of Superman products, plus information about the sale of the 1938 edition of Action Comics #1 - the first comic to feature Superman - for US$1 million (NZ$1.28m) to justify its claim.

But assistant commissioner of trademarks Jenny Walden said that, although it was clear Buck was a superhero because of his "exaggerated musculature", fitting body suit and his ability to fly, there were clear differences between the two characters.

The shield on Buck's chest with a dollar sign was far different to Superman's, and his portrayal holding money went against Superman's altruistic nature.

She also said the shape of the shield was a point of difference, as Superman's diamond-shaped logo "may be perceived as a reference to strength because a diamond is the hardest naturally occurring substance and Superman is known as the Man of Steel".

Superloans and DC's products and services bore no resemblance and Ms Walden threw out the claim, ordering DC to pay Superloans costs of $3570.