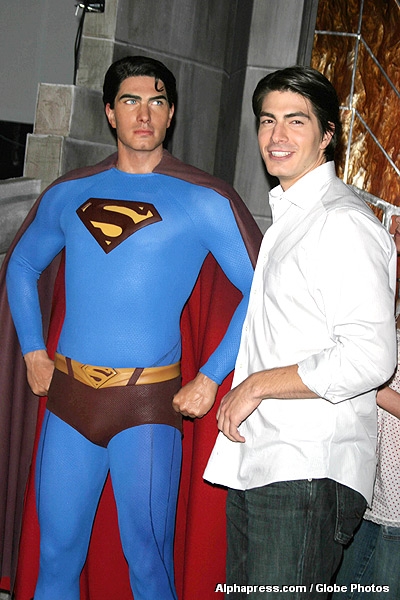 The St. Louis Today website reports that Mike Meyer, a mentally disabled Superman fan who recently went through the ordeal of having much of his vast Superman collection stolen by an ex-work colleague, received an unexpected phone call last week.

Meyer's story touched the hearts of many Superman fans across the world, with groups forming on Facebook to send Mike gifts and letters of support. Police recently arrested the man responsible for the robbery and returned Mike's stolen collection to him. But that's not the end of the story...

He picked up the phone last week to hear the voice of "Superman Returns" star Brandon Routh, a 31-year-old actor and former model originally from Norwalk, Iowa. The two talked about - what else - all things Superman for nearly half an hour.

They touched on the making of the "Superman Returns" movie, the theft of Meyer's collection (which was subsequently returned when police made an arrest in the case), Meyer's memorabilia collection, scenes from the 2006 movie - which Meyer said he has seen 14 times in movie theaters and many more times on DVD - and past actors who have played the role.

At one point Meyer told Routh that he sounded like the late Bud Collyer, who was the voice of Superman and Clark Kent on radio, film and television in the 1940s and again in the 1960s.

The conversation closed with Meyer telling Routh that it was "an honor and a privilege" to have spoken with him.

Check out the full news story at StLToday.com.

Thanks to Adrian Arcega for the lead on this story.