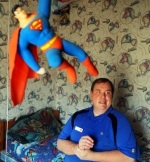 The St. Louis Today news website reports on a robbery that took place in Granite City where a mentally disabled Superman fan named Mike Meyer had many items from his collection stolen by an ex-work colleague.

Meyer said mostly only his friends and family knew of his collection, but he also made the mistake once of telling someone less trustworthy: a guy named Gary whom he worked with at the Hardee's on Madison Avenue in 1991.

Meyer said he ran into Gary recently while at Kyle's Baseball Cards and Comics in Granite City. Gary asked Meyer whether he still collected Superman items and asked to see the collection. Meyer first gave an excuse, but then Gary called him later saying he was in the neighborhood and hoped to stop by.

"He just kept talking like a salesman," Meyer said. "He wouldn't take no for an answer."

Meyer said he let Gary into the house that day and gave him a quick tour. Gary asked to see "my most precious comics," Meyer said.

The next night, Gary was back again, asking whether Meyer would let Gary's girlfriend watch some of his Superman movies. Meyer said while he and the girlfriend watched, Gary disappeared for a while.

Meyer noticed the theft two days later, on the morning of Aug. 24, and called police. All he knows is that Gary has dark hair, a goatee, is about 35 and drives a silver or gray car.

Read the complete story at StLToday.com.

UPDATE: A Facebook page has been created to give fans the opportunity to make donations towards Mike Meyer.

Thanks to Pat McCormack for the lead on this story.