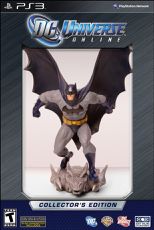 The first DCUO game update is coming soon! Get excited and sharpen your claws because you'll be facing a super-powered Cat Fight with our favorite feline felon, Catwoman. This month's new game play offers some daunting challenges as you face off against Catwoman and her arsenal of cat-powered abilities, the chance to earn extremely cool loot, and the opportunity to purge The Batcave's Inner Sanctum of Brainiac's overwhelming forces. Along with this update you'll see a large number of game play improvements addressing many of the player requested bug fixes, not to mention the first of many User-Interface enhancements. Look for this exciting new chapter coming later this month as...the adventure continues!

The world may be in turmoil as Brainiac continues his invasion but some things will never change; there is always some nefarious new plot unraveling and this month is no different. Mysterious and powerful Egyptian artifacts, housed at the Gotham Museum, are affecting unsuspecting security guards and employees in unexpected ways. Undeterred by this danger Catwoman is determined she will have these ancient cat artifacts as her own. We won't let the cat out of the bag, but chase her across rooftops to uncover this legendary mystery and along the way you'll earn valuable rewards.

Love is in the air, and the battles between Wonder Woman and Circe have disrupted the magical balance, upsetting the Goddess of Love. Fountains have sprung up across Metropolis where players can enter the cherub shadow realm, where - as cherubs - they can celebrate and fight to determine the true meaning of love.

DCUO Fans can look forward to the February update as the first of many new monthly adventures. This month the adventure continues with: