September 14, 2011: After Nearly Six Decades... Superman Finally Gets His PEZ 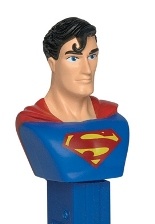 A small but not insignificant event in Superman history occurred in July that definitely deserves every true fan's attention. The event wasn't the re-design of Superman or the re-launch of DC Comics. It wasn't even the prep work in Chicagoland for Man of Steel, the new Superman movie. It was the debut - after nearly 60 years - of the first Superman PEZ dispenser.

Hundreds of pop-culture characters have been licensed as PEZ dispensers since 1958, when Popeye became the first such icon to receive that honor. Since then several superheroes from both DC (and Marvel) have gotten the PEZ treatment, including Batman, Wonder Woman, and Batgirl. Even the Joker, Riddler, and Two-Face have been immortalized as PEZ dispensers. But never Superman... until now. Why this should be is anyone's guess. Perhaps it's because sticking the Man of Steel's head on a PEZ dispenser gives no clue as to who the character actually is. He just looks like some square-jawed, spit-curled dude with a long rectangular box for a body. Now, however, a fundamental PEZ-dispenser-head-design change has solved this dilemma. The new Supeman PEZ is actually a small bust with chest, neck and part of his shoulders. This provides just enough real estate to display the famous "S" symbol and a portion of red cape tucked into Superman's blue tunic. All told, the sculpt is detailed and nicely painted.

The Superman PEZ is part of a Justice League series of three that also includes a first-ever Green Lantern PEZ and yet another version of Batman. You can see (and purchase) the historic Superman PEZ dispenser at Amazon.com or Pez.com.