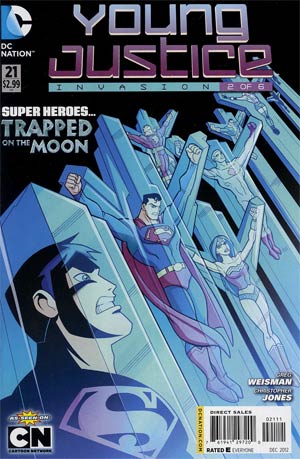 Click to enlarge
M'Gann and the rest of the Beta Squad report in to The Mount that Superman, Superboy and Devastation have vanished. Aqualad relays the chatter to The Watchtower who report that they also have missing members but have tracked them to Earth's moon. Hearing this Nightwing orders M'Gann to lead her squad to the moon in the bio-ship.

The team are divided in opinion but Nightwing orders half the team to stay behind and continue to protect Noor Harjavti at the public speaking. M'Gann, torn, promises to Beast Boy that she'll return. Gar thinks back to five years ago when his new sister made that same promise when Clark Kent and Jimmy Olsen had come to their sanctuary to visit. All four were covering Noor's father, the president at a similar event in Qurac.

Lagoon Boy and Miss Martian race to rescue Superboy in the bio-ship but as they do the kidnapped begin waking up. Each of the victims are trapped inside crystal constructs guarded by strange humming metallic orbs. Looking around Superboy notes the other captives, Superman, Wonder Woman, Gorilla Grodd, Captain Marvel, Captain Atom and Devastation among them. The humming from the orbs disrupting their concentration and focus.

Back in El Paso, Cassie is upset that she wasn't deemed abductable and while Dick argues Jaime tries to make it into school. He is taken by surprise when they reveal that they are secretly Nightwing and Wonder Girl. Dick reveals that his friend Ted Kord has gone missing and that Blue Beetle should take action.

In Metropolis Brainiac arrives and makes his presence felt by launching forcefield generators to collect and preserve the city. While panic ensues Jaime still struggles with the invitation to join the Covert League. The Blue Beetle armor warns Jaime not to trust these heroes but as word spreads of the forcefield's appearance the three of them can't ignore the emergency.

Back in Metropolis, Lex Luthor, and Black Lightning all watch as the forcefield traps the city. The remainder of M'Gann's team investigate the dome and discover it continues underground and is more of a bubble. With Noor's guards trapped outside Gar worries that the bubble might be a distraction so Bee suits up ready to help.

On the moon Captain Marvel withdraws his magic to become Billy. His hope was that the lightning would shatter the crystal prison. It doesn't work but fellow Captain, Atom, decides to do the same trick as the orb was specifically targeting their hero forms. Billy being smaller was transformed into a weaker form but Atom was a full grown man and a military trained man at that. He smashes out of his prison and destroys the orb before it could alter frequencies and recapture him. Now free he transforms back into Atomic form and frees the other heroes. Beast Boy meanwhile comes out of animal form and warns Noor that they need to escape the crowds.

En route, M'Gann and Lagoon Boy learn of the force bubble over Metropolis and ponder how Noor, the bubble and the kidnapped heroes all link to on another. On the moon the heroes ponder releasing the remaining vigilantes and villains. Wonder Woman thinks that Atom should release them all but Atom is uncomfortable with all the unanswered questions and as the League's leader he opts to wait, at least until they find out more.

Superman is surprised to discover one of the fellow prisoners is Draaga and immediately agrees with the Captain. He explains that Draaga had once attacked him and it took the combined might of both he and Superboy to barely defeat him.

Superman is uneasy that they shouldn't underestimate a villain that could capture them all and keep them captive. Captain Atom points out that they are some of the most powerful people in the League and whoever took them has underestimated their might.

One of the orbs on the moon approaches a crystalline man, Kylstar. And it informs him that five of his 'properties' have escaped...

Story - 5: The story is shaping up to be a real epic. A superbly crafted story that I think would only have benefitted from a 'story so far' page.

Art - 4: I liked the art but thought that with the packed script. The art didn't get a chance to breath. With just a few more pages Jones could have spread out some of the scenes better but that's the constriction of publishing I guess. Would be nice to see Jone's sketchbook for the series as opposed to these cheesy adverts and profiles.

Cover Art - 3: A bit of a bland cover compared to last month. Maybe if Kylstar were attacking? Or a scene showing Brainiac's attack? Anyway the worst thing was that the subtitle "Invasion - 2 of 6" has appeared... Solicits don't say the title is being canned but as #25 is a milestone and with the animated episodes on a three month hiatus does that mean the end of this comic? I hope not.