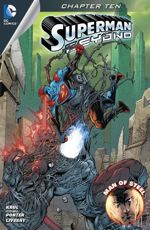 Click to enlarge
As Luthor's kryptonite shards form a massive satellite between Earth and the moon, natural disasters devastate the globe. Still sporting Eradicator technology, Superman bursts into motion, hurling himself at the chartreuse mass, pummeling and pushing it out of Earth's orbit.

Earth's tides no longer corrupted, the disasters die down. Metropolites holler and cheer in praise of Superman, but Lucinda Walters is far less enthused or thankful. She quietly slips away.

En route to the Sun, the concentrated kryptonite radiation from the would-be moon begins to eat away at Superman's Eradicator tech-suit. In a feat befitting the Man of Tomorrow, the kryptonite moon is hurled into the Sun just as Eradicator disintegrates. Basked in blonde brilliance, Superman's strength returns; and yet again, relic or not, he proves that he is Earth's mightiest, most selfless champion.

Elsewhere, at Genetix Industries, Nixon oversees the devastating results of Walker's overdose of nanotechnology. Walker has proven himself to be adaptive, not to mention impressive, but what does that have in store for the future of the City and the Man of Tomorrow?

Story - 5: A rarity today: something I often have trouble doing has been done. I've given a comic book a perfect score. There's just no other way to cut it, Superman Beyond #10 was flat out meritorious.

I do have one complaint, though it involves the arc as a whole and not this issue specifically, so I overlooked the demerit: it's stated clearly that Superman using the Eradicator tech was a dangerous thing for both him and anyone around him. Unfortunately, that's all we get of that. That should be some blatant foreshadowing, but nothing comes of it. It may have been too much to add to the story, but then it shouldn't have been mentioned at all. Eradicator is cool enough without having to string us along with false prospects of the tech making Superman lose his marbles.

Also, there's some hefty suspension of disbelief necessary regarding the swift onset of natural disasters, but it works so well within the context of the story, especially when set against Kal's super-heroics, that it doesn't matter.

Lucinda will make an appearance again, I'm sure. I assume that Superman didn't catch her and she's still at large. She might be a little flat without her holographic daddy, though, but we'll see what happens.

I like how things ended up for Walker. He's hopped up on nanotech goofballs, and he just may pose a real threat later.

So, Clark Kent is dead. Bruce does the kind of stuff he does best and creates secret identities for Superman. This Superman's name was just recently Karl Kent, and is now Kal Kent, a little homage to his heritage. I love this whole idea. It makes sense and adds a little more charm to these future-set stories. Although Lois is gone, Kal still needs to be connected to the world around him to "be human", but there's no real need (nor practicality if he lives for hundreds of years) to do it as Clark. He's got a new name, a new job, even a new set of specs. It's befitting the setting of these stories.

Now, we're promised a "new direction for Superman Beyond". You hear that? That's the sound of my eager anticipation.

Addendum: Comic book quote of the day -
Fire Chief: "You ain't afraid of heights, are you?"
Kal Kent: "Not at all, sir. I love flying."

Art - 3: Porter really stepped up his effort in the past few issues. Overall, this may have been his best work on the title. His Eradicator looks stellar and he did some interesting things with perspective, such as adding layers to the panel of the earthquake to mimic shaking. Nonetheless, I still feel the lackluster art is what is keeping a lot of people from giving Superman Beyond a shot. I've been loving this title, but I wouldn't miss Porter's pencils.

It's official: John Livesay's professional name is now simply Livesay. He's listed on DC's website and on Comixology as such. Interesting.