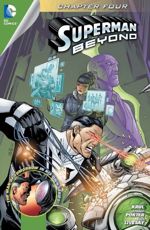 Click to enlarge
Flying over Metropolis, Superman wonders whether his time on Earth has come to its end. With the advent of the supercops, the world has never needed Superman less. Just the same, Superman concludes he needs the world as much as it once needed him.

Noticing a ruckus just outside a GNX facility, Superman joins the team of supercops as they knock heads with a murder of devious insect-like robots. Superman struggles in the battle, however; either robots are getting stronger or he's getting weaker. Nonetheless, the very years that may have diluted his physical abilities have given him something more valuable: experience. Realizing the robots are just decoys, Superman charges into the facility where he apprehends a humanoid robot. It's revealed that this robot is remotely controlled by Lucinda Walters and she's stolen files for GNX's nanotechnology.

Later, Nixon calms the worries of Superman, Fitz, and Walker about the theft of the nanotech. He provides Walker with an extractor: if GNX's nanotech is implanted in a foreign system, Walker will know about it.

Meanwhile, Lucinda, armed with Lexcorp tech, forces her way into the club Vanity. There she meets a crime boss, Mr. Stone, for whom she has a gift - the nanotech files. She suggests Mr. Stone insert nanotech into his army of thugs to even the playing field with the supercops. Better yet, she suggests, Mr. Stone could insert the nanotech into himself. A nice gesture, but he has little use for technology, for Mr. Stone is none other than Solomon Grundy!

Story - 4: Superman Beyond is still delivering the goods. This issue is a bit lighter on pathos, which was good to see. It's been great to behold an emotionally vulnerable Superman but it shouldn't dominate the story. There is some forward momentum on this aspect of the title though: Superman realizes that he needs the world, he needs to do his job, even if the world doesn't necessarily need him. It's a nicer, cozier top off to the genuinely gripping melancholy of previous issues.

As this issue moved away from Superman's emotional trials, we get a closer look at his physical setbacks. He's getting older, and his whitening temples only accentuate the fatigue the rest of his body is feeling. However, he's a much wiser Superman and in this way is able to face conflict that much better. It's akin to a strong, young martial artist confidently walking through a sketchy part of town at night, while a weathered, older martial artist travels where there is no enemy. This is what makes this Superman so enjoyable.

I'm still having some trouble dealing with Lucinda's no-questions asked attitude about "joining" Luthor. It seems it may not be dealt with at any point and it's just one of those comic books things we have to accept and move on from.

Writer JT Krul is flushing out some 24 karat ideas with this title. I was hoping to see some classic characters show up, despite the future setting. No doubt there are limits in who can be used as the human characters are either dead or extremely old. Kudos for Solomon Grundy! Great choice.

A final note: this written-in-porridge release schedule is frustrating the hell out of me. I'm reading a few other digital titles these days (like City in the Desert) and none have a more erratic release schedule than Superman Beyond. It's a shame, too, because it's a great title, better than Smallville: Season 11 (turns on e-mail filter to avoid all the "You Suck!" mail) and better than Superman (You got mail: "You rule! New 52 sucks!"). Next to Action Comics ("You suck!"), this is the best Superman title on the market right now.

Art - 2: First, the good news: the first panel and the last panel are outstanding. The shot of Supes soaring over Metropolis embraced by a full moon looks beautiful. The whites and blacks just pop. The final close up shot of Grundy, with his scarred, cracked skin and humongous zombie fingers is the single best piece of art of the title so far. Unfortunately, it's most of the stuff in between these bookend panels that carries on the lackluster art tradition of Superman Beyond. This inconsistency is becoming rather frustrating, actually, rivaled only by the release schedule. Many other digital titles look great (see Legends of the Dark Knight), so it's almost embarrassing how poor the art can be here.