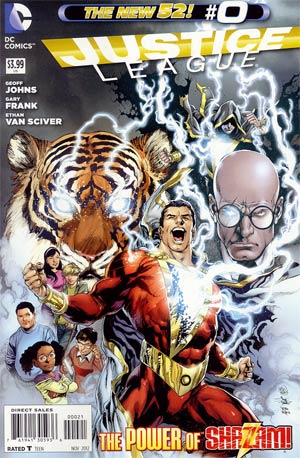 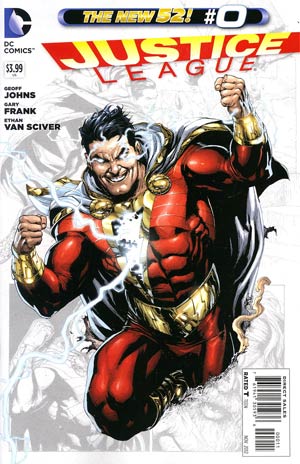 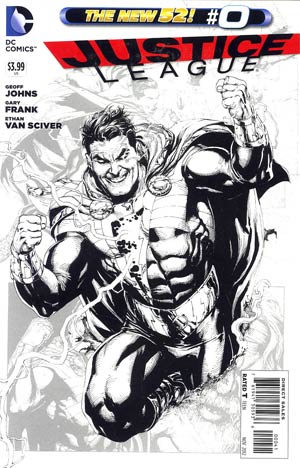 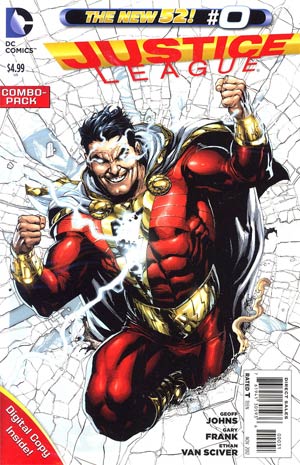 Magic once ruled the world, but no more. Long ago, after Black Adam went on a killing spree, the final surviving wizard imprisoned Black Adam and hid magic. Magic became fiction, not fact, until this very moment. An aggressive Black Adam is free from captivity and once again on the loose. And he keeps asking the same question: "Where is the Wizard?" It appears that Black Adam is seeking revenge. The Wizard is extremely upset that Black Adam has escaped.

Having left the subway train (as seen in issue #11), Billy Batson enters the tomb, calling out to see if anyone is there. Some magical characters watch Billy, saying he is too small to break the curse. They suggest that Billy should be sent back.

A mysterious voice beckons Billy to walk "towards the light". As Billy does so, he walks down a corridor with a series of panels along a stone wall. As he presses each one, the name of each of the Seven Deadly Sins is displayed (such as Pride, Envy, or Wrath), along with the image of a figure who seems to personify that sin. Billy somehow finds this amusing, until the mystery voice tells him this is serious, not "fun and games".

As Billy proceeds, he comes face-to-face with the Wizard, looking grizzled, tattered, and very old. The ancient Wizard sits on a throne made of stone, and insists that Billy is not right for the task at hand. When he calls Billy a "child", Billy is resentful and gives the old Wizard some lip. In a flash of magic lightening, the Wizard casts a spell, asking if Billy is the warrior he is seeking, and if Billy is pure good. Scenes from Billy's life flash before them. The scenes show instances where Billy was rude, thoughtless, or selfish. The Wizard is disappointed in this candidate that the magic has summoned. Billy insists there is no such thing as a "pure good person", and they bicker about that. Billy says that if you try to be good, people take advantage of you, and drag you down to their level. Billy says that people have been disappointing him his whole life.

The Wizard hears Billy suggest that he has tried to be good. The Wizard then casts another spell, asking this time if Billy has the embers of good within him. This time the spell reveals those times when Billy was considerate, compassionate, and unselfish. The Wizard decides that Billy has potential, and will have to do. The Wizard explains that once he gives Billy powers, he cannot take them away.

The Wizard seems to falter, and says they need to hurry. He tells Billy to say the magic word, "SHAZAM". Billy says it meekly and without conviction. Nothing happens. The Wizard tells him to say it with belief, purpose, and good intentions. Billy does that, and is instantly transformed into the mighty Shazam. The Wizard tells Shazam that he has inherited a chair on the Council of Eternity.

Shazam begins to experiment with his new powers, but the Wizard tells him not to waste them.

The Wizard tells the new hero that he must use his powers to stop Black Adam, who is intent on ruling the world using his magic. He says that Black Adam plans to awaken the Seven Deadly Sins of Man. He says that Shazam is all that stands between the world and the magical threats that would enslave, harm, and destroy it. The Wizard also tells Billy to watch over his family, saying this is his ultimate power. As an orphan, Billy is a bit confused by the Wizard's statement.

After calling Billy a "champion", the Wizard seems to disappear, leaving his tattered cloak behind.

Freddy has been hiding behind an evergreen tree the entire time. He finally emerges from his hiding place, perceiving that the coast is now clear. Shazam appears, which scares the dickens out of Freddy, until Shazam convinces him that he is indeed Billy Batson, now transformed. To demonstrate his powers, Shazam lifts the vehicle belonging to the Bryer bullies and their bully of a father. The alarm goes off again, waking the Bryer family. They emerge from their house ready to do battle with Billy, but discover their vehicle in a crumpled heap, totally destroyed. They see no sign of Billy Batson.

Shazam and Freddy discuss what they should do next. Freddy suggests they get some beer, now that Billy has taken the form of an adult. Shazam says he needs some normal clothes first. Shazam looks in the window of a clothing store, perhaps planning to help himself to the business suit he sees inside. But as Shazam's finger moves near some Christmas lights, lightning is conducted through Shazam and knocks out a streetlight.

A lady carrying gifts for the children's hospital is held up at gunpoint. Shazam intervenes, and with a slap sends the gunman flying until he collides with a parked car rather forcefully. Shazam will need to learn to control his powers. He indicates that he did not mean to hit the guy so hard. When the lady expresses gratitude, Shazam asks for a cash donation. The lady hands him a twenty dollar bill. When he later shows the twenty to Freddy, he exclaims that they are going to be rich.

Story - 4: I enjoyed this story that brings the origin of Shazam into the "New 52" universe.

I have been enjoying this Justice League backup feature immensely, all along the way. If DC launches a new Shazam book (and I hope they do), I will certainly add it to my pull list at my comic book shop.

We never hear the name "Captain Marvel" uttered once in this story. Geoff Johns has announced that from now on DC is planning to use the name "Shazam" instead of "Captain Marvel". I must tell you I support this decision. As a DC loyalist, I have never liked the idea of DC having a character with the name of their main competitor. It is as awkward as it would be for Marvel Comics to introduce a new hero and call him "Captain DC". Yes, I am of course fully aware that historically the name has been "Captain Marvel", going back to the Fawcett days. But I prefer "Shazam", and honestly think it is an improvement.

There is a certain irony, however. Whenever someone asks Shazam his name, he cannot answer directly, or he will be transformed into a boy before their eyes.

I liked Billy's discussion with the Wizard about the nature of good, and whether pure good exists in the world. Billy fires off a series of pessimistic thoughts; saying that people frequently disappoint you, that they let you down over and over. Billy asserts that good people get taken advantage of by bullies. He says that it doesn't matter how good you try to be, because everyone else is going to drag you down to their level. Billy has become very jaded, which is certainly understandable for an orphan, someone who has had many bad breaks in life. However, he has become so cynical that when good people show him kindness, such as the Vasquez family, he is not really receptive.

Billy is going to have to do better; especially now that he possesses so much power. We will watch to see if these new powers allow Billy to shed some of that cynicism and find a new optimistic outlook. He really needs to become like Superman; a beacon of light in a troubled world that needs a symbol of hope. His selfish use of his new abilities in this story is disturbing; almost painful to watch.

At first Billy uses his powers like a spoiled child. Despite his adult form, he is still a bratty, selfish child inside. He will have to grow up fast, and learn how to wield these powers responsibly. Maybe when he discovers Black Adam and the threat that he poses, Billy will open his eyes and realize, as the Wizard told him, that this is not "fun and games".

Art - 5: As you probably already know, I am a big fan of Gary Frank's artwork. I believe one of his strengths is the way he can convey emotions in facial expressions. Look back at the scenes where Billy is face-to-face with the Wizard, and you will see what I mean.

Pandora holds a box that is shaped like a skull. She says she knows what it is and what it can do. She says that she was a frightened girl the last time she opened it; and that she was being manipulated. She wants to erase the evils she unknowingly released.

But she is unable to open the box. She even shoots at it, but cannot get inside.

The old Wizard materializes. He apologizes to her, and says the Council of Eternity used poor judgment in punishing her. He says that the other members of the Trinity of Sin deserved their punishment, but she did not. He tells her that only the strongest of heart, or the darkest, can open the box and claim its power. Pandora has many questions.

In Hub City, police discover the mayor's little girl, who had been kidnapped. The kidnapper has been tied up to the top of a light pole. A note with a question mark is attached to the perpetrator. Nobody knows who saved the girl, or tied up the kidnapper. Just like Pandora, the police officers have many questions.

The Phantom Stranger walks at the far end of an alley. As usual, as he walks along, he mutters some cryptic mumbo jumbo.

Story - 3: At four pages, this hardly qualifies as a story. It is more of a teaser.

We get a glimpse of a brief storyline involving Pandora and the Trinity of Sin. Is this a preview of things to come? Or is it just a quick throwaway story? We see the old Wizard show up. Does that mean that this story will intersect the ongoing Shazam narrative? Or not? Does the note with the question mark signify that the character known as The Question was on the scene and was the one who captured the kidnapper? Or did somebody else leave the note? Does the note have any special significance? Who can open the box? And what will happen when the box is opened?

Just like Pandora and the police officers, I have an awful lot of... "questions".

Art - 3: The artwork is competent, but unspectacular.

And so we get an image of Shazam doing that very thing here. Shazam looks a bit menacing, which is appropriate since this is an irresponsible boy with the power of a god. Dangerous combination!

Cover Art (Variant Edition) - 3: Shazam is in the foreground. He is being struck by the magic lightning. We see the faces of other people who have been part of the story so far: Darla, Tawky Tawny the tiger, and Doctor Sivana among others. The images are pretty good, but this cover is too crowded for my taste.