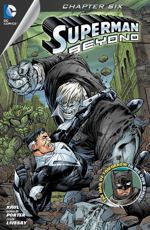 Click to enlarge
From the busiest Asian megacity to the humblest African tribal village, people around the globe are startled by a massive, sparkling green asteroid belt peppering the sky. As incredible as it may seem to most, it isn't as beautifully strange to the Man of Steel who's lying in a gutter about to die. For, you see, that's no regular, garden variety asteroid belt - it's kryptonite.

Solomon Grundy delivers a holographic message to Superman from Lucinda Walters. The daughter of Lex Luthor boasts of victory before Grundy's nanotech enhanced drones attempt to make history of the Man of Tomorrow. The gang digs into Superman, but the Last Son never goes down without a fight. Still, the greatest of all superheroes is in no physical shape to take on such big guns. The supercops step in to save Superman, but find themselves no match for Grundy.

Fortunately, being a symbol of great inspiration means you make - and keep - important friends and allies. When you need your friends most, they pull through. For Superman, this means help in the shape of an exploding bat-shaped boomerang. Enter, the Dark Knight.

Story - 3: In my last review I noted how some of these digital-firsts, while short in length, can still be full of the right ingredients for fleshing out a good comic book, making them seem lengthier. On the other hand, some issues feel like they were read to you by Barry Allen, or at least the Micro Machines Man. While this isn't inherently a bad thing, it does mean that single issues can end up feeling like they're going through the motions. Superman Beyond #6 is one of those issues.

It's actually a decent issue with plenty to praise. For the most part, I love that Superman doesn't give up as long as he has an ounce of energy left. This isn't specific to Superman, mind you, as many of DC's greatest heroes, like the Green Lanterns, and plenty of "B-listers", like the Atom, are frequently portrayed as selflessly heroic. The difference here is it's Superman, our Boy in Blu... er, ah... Black, and he is fighting selfishly: he's fighting for his life. It's quite riveting, actually, and I loved every panel.

Now, to my gripes. Gripe the first is perhaps touchy, but I'm going to endure the hate e-mail anyway. While Grundy is making pulp out of Walker, he says to the supercop that fighting for truth and justice (i.e. getting your butt handed to you) is what true heroes want. Superman, recovering slightly, says, "You...forgot...something. The American way." I don't have any real problems with the now iconic expression, but I can't help but question its validity for the character when I consider that it grew out of propaganda and fear during a truly frightening time in world history. Pop culture icons in the United States for years were part of propaganda so Americans would "report a Commie" and "stay on the job until every murdering Jap is wiped out." Even Wonder Woman was selling war bonds. These days, though, the phrase feels antiquated, used, as Christopher Reeve once said, as nostalgia. I only have so much tolerance for the short change of nostalgia.

Even if we consider that the American Way refers to those brilliantly simple words drafted by Thomas Jefferson in the US Constitution, it's hard to ignore the fundamentally grating, exceptionalist lyrics of Toby Keith. Of course, if either of those two men were Superman, it would be Jefferson. Keith isn't even Plastic Man.

In any regard, I prefer to believe here in the 21st century Superman is bigger than a single nation's ideal drafted over 200 years ago. Superman represents all that is good, including truth and justice and all the inherent liberties and joys they may bring. Perhaps it's time we go borderless, let go of some of the nostalgia and look future-ward together with those virtues represented by a truly universal Man of Steel.

Gripe the second is also a minor quibble, but it, too, may get me some more hate e-mail. Batman to the rescue! Yeah, many of us don't quite like it when Batman comes to the aid of Superman. I'm less annoyed by it than others, though. Actually, it seems to me that Superman himself wouldn't be jealous or self-righteous whenever Batman lent a hand. In fact, I think Superman would be openly grateful and honestly gracious for the help. In this case, though, especially since I was championing the use of kryptonite in my last review, I was hoping Krul had something massive in store, a mind blowing escape. It would have been interesting to see Superman drop down into the sewers where the radiation took longer to seep to continue the fight, slowly regaining his powers while in agony dealing with the onslaught of attacks from Grundy and his goons. No dice. We got Batman, instead.

Now, what I did appreciate about Batman saving the day (listen to all those hate e-mails being typed!) was a very simple, quaint fact: it wasn't Batman Beyond. That's right, it's the original Dark Knight himself, Bruce Wayne. Sporting hefty armor to hold up his fragile, aged frame, Batman quips "I still pay attention to the night sky. In case there's signal for trouble." Well played.

Art - 3: Porter has pulled some of his act together this issue. There's more detail, more structure, and more pop. This title hasn't looked this good since issue #1.

I do have to make a complaint though. There's no weight to Porter's action sequences. Punches, kicks, slaps, eye pokes, you name it, feel dainty, as if the characters are dusting doilies. This pulls you out of the action and is the kind of art misstep that is keeping people from taking this title seriously.