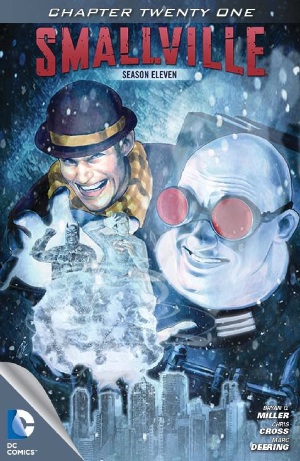 Lois, Green Arrow and the police are all in pursuit of Batman, now considered the lead suspect in the death of Joe Chill thanks in no small part to his having seemingly absconded with Superman (who tells Batman his name is Clark). As the vehicles speed through the streets of Metropolis, Batman proves he's one of the good guys by contacting Lois via Nightwing in order to figure out how to save Superman, who has four Kryptonite bullets in his abdomen. Lois tells Nightwing (who tells Batman) they have to remove the bullets and then expose Superman to yellow sunlight. As Nightwing takes remote control of the Batmobile, Batman performs the necessary surgery and then uses the sunlight technology in his armor, now recalibrated to shine in the yellow rather than the red spectrum.

Meanwhile, thanks to Green Arrow, the Batmobile has eluded the authorities and arrives at Leviathan, Batman's shipboard base of mobile operations. But it seems Prankster put homing devices in his bullets; he knows where the heroes are.

Story - 5: Much like last week, I found the latest chapter of "Detective" to be pretty much above reproach. All this usually requires is a little bit of logic and the happy harmony of non-redundant words and images. See, for instance, the succession of three panels where Nightwing talks to Lois and then to Batman about how to save Superman. This is a very well executed and wonderfully economical means of not only telling the readers what exactly is happening but also showing the characters experiencing it: there's no need to have Lois actually say "Pull out the Kryptonite then expose him to yellow sunlight," but showing her anguish in the moment and then relaying everything to us via Nightwing's dialogue with Batman (including, crucially, having Nightwing say "that's what she said") gets us all the way through a seriously important moment without unnecessarily convoluting anything (unlike "Detective"'s opening scene). Very nice. I maintain something like this should have been done with Batman's attack on Superman, but oh well.

In terms of story, we're also now at a point where, regardless of how irked I was/am that they rushed/forced it, there's enough evidence of Batman's good intentions that a proper partnership amongst him and the Metropolis heroes has become plausible. I still find the sunlight technology to be far-fetched, even more so now that we see it can be remotely recalibrated to different frequencies, but I promise I won't allow my general disdain for the DC Universe's whole power-by-color thing to influence how I grade this book.

So, yeah, as we head into the climax, things are looking up. I'm actually excited again to see where this story is going.

Art - 5: The art, too, continues to be strong. The "Thank you" from the Batmobile's on-board computer following the tumble was a bit of unnecessary comedy, especially because the stunned looks on Oliver's and Lois's faces and the "So... that happened" from the cop covered off the comic relief well enough. But that, I guess, really belongs in the "Story" section. Well, what can I say? The art was really good.