Click to enlarge
Lex Luthor is having an MRI and learns that the neuro-toxin that erased his memories has increased his cognitive power and that nothing else seems to be wrong with him. His doctor recommends psychological therapy for an answer to Lex's visions of Tess. Tess, meanwhile, shows up and she and Lex discuss to no resolution whether she is a ghost or an hallucination. An aide (probably Otis but not explicitly identified) interrupts (evidently oblivious to Tess) to recommend that Lex postpone the pending press conference, which Lex refuses to do.

Cut to Superman scanning the region of space where both The Nexus and the mysterious spacecraft had earlier appeared, revealing to Chloe in the process that he has "multi-spectrum" vision, discovered through tests that Dr. Hamilton has been performing at S.T.A.R Labs. Back at said lab, Superman receives a text message from Lois on his belt buckle and learns Clark is late for Lex's press conference.

At the press conference, Lois confronts Lex about his return from presumed death, to which Lex says that he was "away" to protect him from himself - or, rather, from the synonymity-with-evil of the Luthor name, a legacy owed to "twice-late" Lionel Luthor. Tess's suicide, he says, and the phone call she made to him "in the last hours of her life," prompted him to want to change that legacy. He talks about how he sat "idly by" as the likes of Superman and Green Arrow saved people from "ourselves," while all the while malicious alien life had been proving to be the real threat. As such, Lex announces the launch of the first Guardian Defense Platform into orbit, two days hence, to be piloted by Commander Hank Henshaw.

Story - 3: Let's talk about the balance between new and old information delivered in this week's episode. From my perspective, to keep a serialized story's momentum going, you need to be delivering more new than old information each time out. In the case of "Guardian: Chapter 4," I'd say we don't learn much of any real significance (although there is character development) and that the episode's entire impact is underpinned by Hank Henshaw's appearance at the conclusion - a pay-off that is itself dependent on Henshaw's place in the extra-Smallville mythos, which enables a combined set of expectations and speculative possibilities that a completely new character does not.

(E.g., the mysterious ship is no doubt Excalibur, but will that name be used? Was the appearance of The Nexus coincidental or did it disgorge [or whatever] the ship? And had the ship and its crew already been ill-fatedly exposed to radiation or is that ultimately the forward-driving function that The Nexus has been playing all this time?)

As a complete story unto itself, and especially if I was a reader familiar with Superman only as seen on Smallville, this episode doesn't much work. For the kind of die-hard Superman fan who also really enjoys Smallville, however, it probably works beautifully for leaving so much to anticipate in future episodes. For the rest of us (who know a fair bit about Superman in various media but don't necessarily locate the character's current soul in Smallville, no matter how much we may have enjoyed Smallville in sum), it's probably just enough to keep us interested.

Let's break it down.

First scene, Lex at the hospital, what of any significance do we learn? That Lex's brain function has been augmented and that he, Lex, knows about the neuro-toxin. That's it. Importantly, we don't yet know exactly what's going on with the Tess appearances, though it's inconclusively suggested that only Lex can see her. (There is a tease that an answer to her current ontology might be found if Lex spent actual effort on the question, but it's only a tease, something she intimates without elaboration. And that's cool - I can dig a mystery.) Other than that, it's all expositional retread - of course Lex's brain is "new," it's cloned; we all know what happened the night Tess died, we saw it for ourselves; we all know that Lex does not trust Superman, or aliens, and that he is more than willing to take matters into his own hands. Not a huge amount of motion.

Next scene, Superman in space, Chloe and Dr. Hamilton at S.T.A.R. Labs, then all three at S.T.A.R. Labs. More motion here, not all of it good (mostly, the not good, the [no-doubt-unintentionally] implied subservience of Chloe to "the husband" Oliver in having her refer to Superman as "Boy Scout" at Oliver's insistence... just a strange detail, that). We learn that Superman has multi-spectrum vision (which, because we pretty much figured that anyway, what we're really learning is that Dr. Hamilton has been conducting tests on Superman that are yielding new intra-Smallville knowledge); that Chloe didn't know about the tests; that Chloe doesn't know much of anything about S.T.A.R. Labs, even though she usually knows (or is at least connected to) everything (more not good, also in character development terms); that basically post-Crisis Superman Robots are going to be on the scene in episodes to come; that S.T.A.R. Labs in this continuity was established by Virgil Swann specifically to serve The Traveler; and that Superman's belt buckle serves as a both a holographic control panel and a pager (pretty cool, heh). Only the stuff about S.T.A.R. Labs matters here, really. But it's good stuff and helps fill in this growing Smallville universe.

Press conference scene. Right up until the very last panel, this is all character development - specifically of Lex but with some Lois and Clark thrown in for good measure. And I mean that - this is a good Lex,-Lois-and-Clark scene in terms of their interpersonal dynamics. I have an especially easy time hearing Michael Rosenbaum coming out of Lex's speech balloons. And the dramatic irony of placing the Lex line "Our savior is much closer than you think" over a panel showing a close-up of Clark, glance askance, when Lex is referring literally to the as-yet-unrevealed Hank Henshaw, is appropriate, if a bit too common (in its transparency), even for Smallville. We don't actually learn anything in this scene, but that's ok - this is the scene with Hank Henshaw. That's enough.

And it is. I'm not personally complaining, or being sarcastic. If anything, I'm saying that almost every panel that preceded the final one could have been completely different and the impact at the end would have been the same, which might sound like a complaint but is actually just one way to acknowledge that what we've just seen is but the space between two commercial breaks, in show terms. I'm getting used to that, now.

I do have a small complaint about how Lex knows about the neuro-toxin, but my guess is that they'll give us a flashback scene in which he is shown to have deduced it. Because, technically, he should not just know that Tess applied the toxin - the memories it would have erased upon taking effect would have included the one of Tess applying it to Lex's face, as well as the one of him stabbing her. It would make no sense if he kept the memory of the 30 seconds between the toxin being applied and it taking effect. Given the supposed efficacy of his mind, however, it's easy enough to imagine him figuring it out shortly afterward. It'll happen in a Tess hallucination (or whatever) scene, and is not much a part of the associated mystery - not that they're necessarily playing it as such; at the moment, it's just a nit for which I'll be keeping my eye out.

Art - 3: I am now distracted by the likenesses - other than Clark/Superman and Lex, there's little to no resemblance between the art and the actual cast left here. And I care about that only to the extent that it's been made a feature of the production. It doesn't bother me in the least that these aren't the most strenuously detailed portraits imaginable, but it's now at the point where it seems effort in these terms is being only selectively applied.

Scenes in space continue to be beautifully rendered, as does the lighting more generally. And who doesn't love a subtle nod to the original Action Comics #1, seen when Dr. Hamilton is describing the vision testing Superman has undergone. I was at first puzzled when Hamilton is introduced because his first speech balloon is indistinguishable from Chloe's. This makes sense if you take the distinction to be on the audio source rather than the individual speaker - because he is in the same location as her, Hamilton would only have been audible to Superman through whatever means Superman is communicating with Chloe. But consider that the degree of difference between Superman's and Chloe's speech balloons is four-fold (typeface, type color, balloon background color, balloon border color): does it seem unreasonable to ask for a single-degree of difference between Chloe and Emil so that we aren't wondering why Chloe is answering her own question so definitively?

Really high point, though: No repeated panels at the end. Thank you, Smallville.

Cover Art - 5: What can I say? I love this art. Those are Rosenbaum's eyes, and the gentler expression on the face reflected/hidden in them does a nice job of recalling previous episodes, most notably Season 3's "Asylum," Season 4's "Onyx" and Season 7's "Fracture." Good stuff. 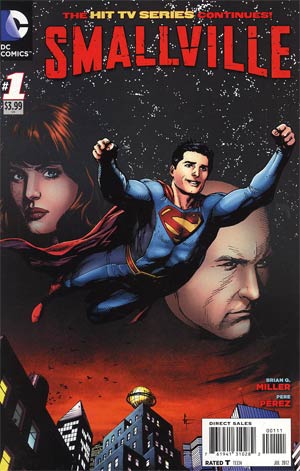 Cover Art - 2: This cover fails because Superman looks inexplicably gimpy, and not just because of the way the lower part of his left leg is hidden in a shadow so deep he appears at first glance to be amputated. It's also the expression on his face, which is more, um, simple than I'd prefer. Also, though it began on the show as a light brown and was only darkened gradually as the series progressed, Lois's hair was never red. But is that even Lois? Way to go, Smallville, for reminding me of your fetishized and perfectly impossible Lana Lang. Or, then again, maybe it's supposed to be Tess (Smallville's Lana's hair was never really that red, either). Tess, a character not nearly as central to the larger Smallville story as either Lana Lang or Lois Lane - and already dead (presumably), besides. In terms of significance to Superman's life and story, that kinda has to be Lois, doesn't it? That's what I was thinking right up until I really thought about it. It probably isn't, though. Can't decide what I think of this.

What do y'all say?

There's a bit of extra content included in the print edition, though no new information. We're talking ads (of course), a page of Superman costume designs, and, most curiously, two pages of synopses of the first ten episodes of Season 1. I assume each print edition will continue this trend, so, if they stick to ten episodes per edition, that leaves us primed to expect Smallville: Season 11 to continue for at least 22 issues (assuming consumer demand), which, at three weekly installments per issue, works out to 66 weeks of story. Unless they go only a year like this and then do a Season 12. Or something.

But let's maybe try not to get too far ahead of ourselves.