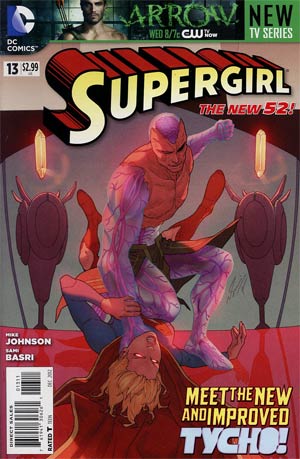 Click to enlarge
Kara Zor-El is confronting Simon Tycho. He's different this time, for the fire in the space station during their last encounter forced him to be grafted to a gelatinous translucent alien life form. This allows Tycho to absorb information from the Kryptonian data in the underwater structure created by the remains of the pod that brought Supergirl to Earth. Tycho now speaks Kara's language and has all sorts of knowledge of her and her home planet. It was he who made the kidnapping attempt on Kara in issue #11. The Maid of Might now must stop her foe from taking control of what's left of the world where she grew up. Should he gain complete access to this new Sanctuary, as it later calls itself, Tycho may prove to be unstoppable even for Supergirl.

Tycho has played an audio recording of Kara's father as he begins to launch the pod carrying her. The Lost Daughter of Krypton even hears the truth of her father's experimenting on her and Alura's killing Zor-El. However, the Sanctuary is the final gift Supergirl's dad has given to her. Its computer responds only to her voice. Tycho wants Kara to tell it to give him control of the structure, something it wouldn't permit when he perused its data records. Naturally, the Girl of Steel refuses. She and Tycho battle until she commands Sanctuary to encase him in crystal until he changes his ways. Knowing that Kryptonian technology should not fall into the wrong hands, Supergirl orders Sanctuary to not permit anyone to enter who is not her. Kara Zor-El may be on an alien world now, but thanks to her father, a piece of home can provide her solace from the chaos of her new life.

Supergirl finally has a chance to relax as she learns of the Sanctuary and its surroundings. She takes this time to contact Siobhan Smythe to let her know of her whereabouts. Suddenly, the Sanctuary is giving Kara a warning. Kal-El is battling an unknown Kryptonian presence, and it's about to bring about H'el on Earth!

Story - 5: While the flow of this story arc was interrupted by last month's #0, it's hard to find fault with this issue. Mike Johnson seems to work better as a solo act than he does with Michael Green on this title. The battle wasn't sluggishly paced as others sometimes tend to be, and the character moments work perfectly. Upon first reading the revelation of Kara learning that her mother had murdered her father, it felt a bit rushed. Yet, it worked well for me the second time around. It also helped to look through the previous entries in this series as well. Some loose ends are tied up very well as we prepare for "H'el on Earth". I honestly hope this is a look at things to come in Supergirl as this is perhaps the most entertaining one of the bunch so far.

Art - 5: Normally, a guest artist tends to interrupt the flow or pacing of a comic in the visual sense. That isn't the case with this issue. It feels like there really hasn't been a change. I'm not sure if Sami Basri did this on purpose or if his style is similar to Mahmud Asrar. Either way, the images look great and go well with what Asrar has done in previous issues.

Cover Art - 5: This image was a pretty good one. It made me impatient to read the comic inside. Most covers these days tend to lean toward iconic drawings meant for posters or statues. Yet, this one really gives us an idea of what's going on in the book. It's a pity more art doesn't do that.