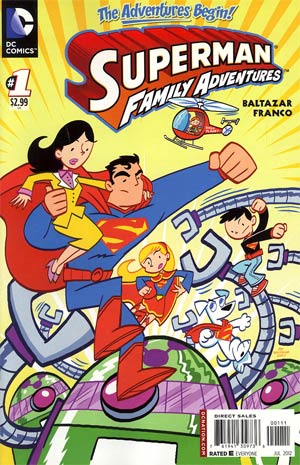 Click to enlarge
A meteor on a collision course with Earth is halted in mid-air by Superman, who throws it back into space before heat-visioning it into dust. The crowd goes wild. Meanwhile, at the Daily Planet, Perry White shouts at an initially absent Clark Kent for missing the latest Superman exploit, praises Lois Lane for not missing it and demands that Jimmy Olsen, already on assignment, bring him coffee. Explaining to a disbelieving Lois that he misses the action only because he's Superman, Clark is called to alter-ego action by a troupe of robots rampaging Metropolis.

Superman and the robots fight and are joined by Superboy, Supergirl and Krypto. Unbeknownst to them (but knownst to us), the robots are under the control of Lex Luthor, who has outfitted the robots with an absorption ray to transfer Superman's powers to the Luthor Battle Suit. But the plan goes awry when Krypto jumps into the ray when it is fired at Superman, thereby transferring Krypto's powers not only to Luthor but also to Luthor's mouse Fuzzy.

Newly empowered and canine enhanced, Luthor confronts the Family directly, but Superman makes short work of him by dismantling his battle suit in a single rip. Using a tree branch, Superman then distracts Luthor with a game of fetch while Superboy and Supergirl retrieve Luthor's powers transfer unit and revert both him and Krypto to their original states. Thanks to Fuzzy's help in capturing Luthor, the Family adopts him and they all fly to the Fortress of Solitude to get Fuzzy his very own super suit.

Back at the Daily Planet, Perry White receives his coffee, cold, with the two sugars he'd asked for as well as a little dust, rubble and robotic debris. Nothing fazes the editor in chief.

Story - 4: My nephew, Forrester, will be 3 in July, coincidentally the same month on the cover of this book. He doesn't read yet, but he's been talking for a while, and first said "Superman" a little over a year ago. (I wrote about it here on the Superman Homepage.) He's awesome, and he doesn't even know it yet. When I first heard about Superman Family Adventures, I knew I wanted to do the Homepage reviews of it because I knew right away that I wanted to base those reviews, at least partly, on Forrester's reaction to the book as I read it to him.

And now that day is here. Hooray!

And why not? There's something for everyone in this book, assuming children are involved in the reading. None of the character work is especially deep and what happens pretty much just happens (meaning, there's no context for anything and basic understanding of the story depends on prior knowledge of the characters and their relationships), but that's the beauty: it manages to strip the mythology down to its essentials without sacrificing the built-in energy of a good Superman narrative.

The "assuming children are involved" proviso is important, though - this book's tale swims in the shallow end, including obvious jokes involving a 'dogified' Lex Luthor scratching himself (with his foot) or playing fetch and an oddly delayed reveal of Luthor to begin with, where the letters on the three evil robots clearly spell out "LEX" but not until they are shown in that order a few panels later does the Family clue in, at which point it becomes instantaneously obvious and true. That's doubly dumb, even for kids. (Spelling lesson here, though, maybe.)

I wouldn't read this for my own enjoyment, is the point. Easy references in dialogue to the Donner films are simply insufficient to feed my soul. Forrester loved it, though, and I loved that. Yep, I did different voices and had to answer "Who/What is that?" a lot (he's not quite yet 3, remember), but it seems to me that the experience was precisely what Baltazar and Franco had in mind. I've never read Tiny Titans, but that's easily rectified.

Art - 5: I know some people, because I saw their comments on this site, reacted negatively to the character designs when they were first revealed. I was not one of them. Again, we're talking down-to-the-essentials here, which, in terms of visual art, means iconography, graphic design, simplicity itself.

It means not worrying so much about whether Superman's suit was made by Martha Kent or is some kind of Kryptonian armor and, more importantly, whether we can tell just by looking at the page, it's that Superman is recognizably distinct from everyone else and that they are from each other, as well.

The story is going to deal in broad (too broad, sometimes) concepts and tropes.

It's only fitting that the art do the same.

Cover Art - 5: Fun tableau that shows off both the family and the issue's central action without giving away any of the real conflict (i.e., with Lex Luthor). Totally pro.