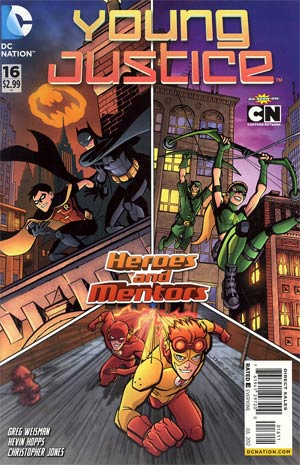 The Star City World History Museum is being robbed.

From the building a cross the street Artemis and Green Arrow monitor the thieves and zipline into action. They meet a barrage of bullets and a group of thieves stealing a twin snake gold statue. Artemis blinds the thieves with an oil arrow that sprays everyone in the room but despite this a member of the gang is able to escape to the roof and into a waiting helicopter. Green Arrow fires a tracking GPS arrow but it's disabled by the crooks. Artemis smiles at her mentor revealing that the oil from her arrow is laced with GPS micro beads.

Central City Zoo is in crisis, the animals have escaped their confines. Rescuing civilians, the duo of Flash and Kid Flash round up the animals and dig a trench around them to trap them till the keepers can contain them. They are then alerted to a disturbance in the reptile lab which has been invaded by a group of monkeys. Again racing into action they are able to capture each of the escapees and transport them back to their cage. Flash races back to the reptile lab and with his protege on hand points out the escaped animals were a diversion. Concentrated cobra venom was stolen in the commotion. Kid Flash notices a footprint in the lab and using his own investigative skills finds the tread is made of pollen. By triangulating the pollen's native growth area they should to be able to track the thief down.

Gotham City Observatory is overrun by a gang who drug one of the staff. Batman and Robin have secretly been watching and leap into the fight. The kidnappers appear stronger than anticipated, trashing a large display of planets to fight the dynamic duo. Batman and Robin are able to best all but one. Batman discovers the man they are trying to kidnap is Dr. Jason Burr but as he looks up he sees the team all swallowing poison. Leaping at the last moment, the Dark Knight is able to prevent the last of the group from committing suicide.

The covert League regroup and compare their notes.

Artemis and Green Arrow were able to track their statue thief to Minneapolis before the trail went cold. The pollen the Flashes tested was also Minneapolis based, while the interrogation of the kidnapper by Batman gave them the lead they needed. The villain base was the New Age Monastery long abandoned but recently purchased by a man named Burr... The brother of the Dr. Burr, the man kidnapped from the observatory. More sinister still is that Jeffrey Burr isn't just Jason's twin but also the evil villain, Kobra!

The heroes watch in horror as a sacrificial ceremony begins.

Story - 5: The last story was a character driven journey so to be thrown through a loop directly into an action romp is just the kind of amped up change we needed. A nice touch is pairing up the Covert League with their inspirations. My nitpick would be that Artemis and Kid Flash both proved to their mentors that they could be more than sidekicks now, they were equal to them but Robin was still Batman's second. The other thing is it would have been nice to see Superboy team with Superman now it's been a while they've known one another.

I can't praise the book enough. It explores themes present in the cartoon and quite often pushes the envelope a little. This is far from a kid's book and I think it's a major crime that DC hasn't got Hopps and Weismann on some more books.

Art - 5: In keeping with the writing, the book continues the high standard with some top notch art to match the show. The inking could be a little less heavy allowing the art a little 'space' but that's more taste than actual critique.

Cover Art - 4: A nice action based cover. Though it tries to convey the three pronged story inside, it comes off a little Silver Age. It probably would have been nicer without the 'walls' separating the duos.