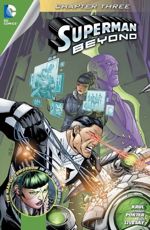 Click to enlarge
Lucinda Walters ponders back upon her life, making specific note of how delusional the idea of karma is. She's of the opinion that life's only purpose is to get in a few good kicks while you're down. Things are changing, though, and while Lucinda still holds a grudge against life, she's beginning to believe in fate. After all, she just discovered she's Lex Luthor's daughter.

The hologram of Luthor tells Lucinda that his absence from her life was to protect her from his greatest enemy. Waxing lyrical, Luthor tells his daughter how Superman is a sham, a deceitful devil undermining the human spirit. Superman's purpose: to enslave humankind.

Out for a stroll, Clark tries to clear his head. This modern city and its new team of elite supercops are all confusing to him, and not even the simple joy of one of his favorite things - a hot dog from an old time vendor - can ease his bewilderment.

Looking out on the city, Nixon and Fitz clash on the early effectiveness of the Advanced Officer Program. Is it too early to claim it a success? In any regard, perhaps it's time the GNX nanotechnology making the supercops possible be introduced into more officers.

Lucinda peruses her dead father's Superman database. She's set to take up Daddy's sword as a plan Luthor put into place years before is bearing fruit in the form of kryptonite. Now, the timing is right for Lucinda to do what the Old Man couldn't: kill Superman.

Story - 4: Ultimately, I really enjoyed this installment. It's shallow on action but, like the previous issues, deep on story. The only shots of Superman we have are flashbacks. What we do see of Clark, however, is golden. The idea that the vendor would remember Clark after a long time is a classy touch. Adding to that is the revelation that both Clark and the vendor are not only old, but of not much use to modernity. There aren't papers anymore, nor very many hot dog stands. Yet, we see Clark and the vendor agree that something must be said about the two of them still kicking. Krul has done something great here, something that I think more writers should be doing: putting life into secondary characters. Francis Manapul is doing a cracking job of this on The Flash, but Krul has taken a character we may never see again and made us feel for him, and feel for how he relates to Clark. It's crystal characterization.

My only real problem with this issue is Lucinda's quick acceptance of what she learns from Luthor's hologram (think Jor-El in Superman: The Movie). I find it a bit hard to swallow that she'd jump on board with Luthor's plan to kill Supes just because she's started to believe in fate. It's a bit rushed, and I would've liked to have seen this flushed out a little bit more. Just the same, I like that Lucinda is immediately rejecting the idea of strapping into a battle suit. She may be daddy's little girl, but she's going to do things her way.

Again, the idea of an elite group of supercops in Metropolis to replace Superman isn't new. It looks like the force is going to grow, as well. Nonetheless, the context through which this is being told is a little different, so I'm hoping Krul can give us something new. I'm okay if the scenery is the same as long as the road has a few new twists.

Art - 2: The art just isn't very consistent. When it's good, it's decent, but when it's bad, it's damn near hard to look at. The coloring is quite good, especially on Luthor's hologram, but the backgrounds are just slapped together with human proportions defying Galileo's Square-Cube Law. Honestly, with a story this good, it's a shame the art is so uninteresting.

Cover Art - 3: There isn't much to say here. It's nice to get a break from the cover that was used for the "Relic" portion of this storyline, but still there's nothing to write home about.