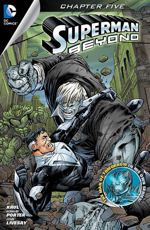 Click to enlarge
In minutes, a dastardly plan put into motion years ago by the late Lex Luthor will come to fruition: thousands of chunks of kryptonite from around the galaxy that over years were captured by computer-rockets are now being settled into Earth's orbit. Their purpose - to finally destroy Superman. The finger on the button - Lucinda Walters, the daughter of Luthor.

In Metropolis, Superman worries about the human tendency for escalation and the tragic results that often come with oneupmanship. The Man of Tomorrow exchanges words with Walker, the head of the nanotech enhanced supercops over the killing of one of Solomon Grundy's thugs. Grundy's goons are also enhanced and the supercops are ordered to extract the stolen tech from the thugs' bodies. This results in death and Superman doesn't much care for the method.

Enter, Grundy. As Superman and his old foe come to scraps, the radiation from the orbiting kryptonite starts creeping its way earthward. With his failing super-vision, Superman sees the kryptonite encircling Earth. There's no escape; the kryptonite is everywhere.

Story - 4: I've found something interesting with these digital-first titles: some of them are brimmed with story and all the little bits n' bobs that make up a good read and thus require a little more attention; others just whiz by like a fragment of Speed Force, and yet somehow retain a proper grasp on what makes a comic book enjoyable. Superman Beyond #5 is the latter.

Not much happens here, but considering the nature of digital-firsts, it's forgivable. We basically only get the bad guys rubbing their sinister hands at the onset of their wicked plan; the hero scolding the loose canons for their passive willingness to kill; a big fight; and the follow through of the aforementioned wicked plan. While it may all seem derivative, and a good argument could be made for that, there is still a heaping sense of concern, lamentation, excitement, and hanging cliffs infused into the story. Krul knows these characters, he knows what he wants them to do, and he's doing a cracking job of telling their story.

I have to say I love this Solomon Grundy. I have a soft spot for him, in general, because I love me some horror-inspired stories and characters, but the idea of Grundy, often the grunting brute with the heavy right-cross, as the biggest crime boss in Metropolis gives the undead lunkhead a twisting new appeal. Krul didn't forfeit Grundy's roots, though, as noticed when Grundy says to Walker "My strength is all natural. Make that supernatural." Perhaps more symbolic of where Grundy comes from is in how he makes his appearance in this issue: bursting from the ground and crawling out like a rotten, fleshy zombie ready to chew the Man of Steel's ear. Stellar.

Quickly, I want to address the MacGuffin of this story, that being kryptonite. I don't completely agree with naysayers who believe kryptonite, being the easy way out that it is, shouldn't be used at all. DC did that - coincidently, I'm wearing a Superman #233 T-shirt while I type this - and it was probably the right thing to do in 1971. Things can be different, especially considering that kryptonite is a brilliant component of the Superman mythos. That he can't embrace the only geological remnants of his home world is tragic. Nonetheless, it is true that kryptonite can be the gateway for lesser writers to introduce conflict; however, Krul isn't a lesser writer. He is showing that kryptonite can be part of a very good Superman story, it just needs to be used properly and in an interesting way.

Art - 2: *sigh*... I really wish I could say something nicer about this title's art. While I've never thought of Porter as one of my favourite artists, his prior works, like on The Flash, came from competent pencils. I truly don't understand what's happening here. Like I said last review, it seems Porter puts heart into the close-ups and splashes and then just rushes through the rest. It actually feels like he doesn't care about the characters, as rough as it is to say that. It's a damn shame, too, because I've spoken with some who have said they didn't bother with Superman Beyond because the solicitation art turned them off.

As sterling as this title is it deserves better treatment from its art team. I can't help but feel now that a shake up is really, really necessary.