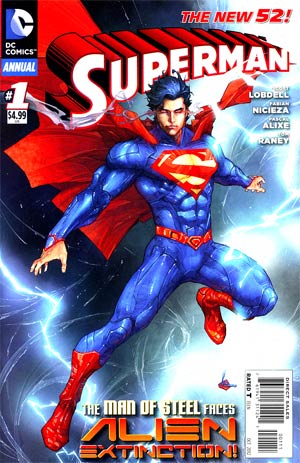 "Protector of the People"

Click to enlarge
The Royal House of Daem, three thousand, six hundred years ago and a young Prince Artus carries his dead wife into the castle's royal chambers. He believes their race (the Daemonites) has become weaker by mixing with other species and cultures. Evidenced by his wife and child's death during childbirth. His mother, though understanding of the loss is unhappy at Artus' threats of treason and exiles him from the kingdom.

In modern day, Clark begins to regret having a sloppy room mate like Jimmy, deliberately slamming his door to make sure Jimmy wakes for work, he then heads onto the subway.

With a renewed love of life, Clark relishes being able to be a common man traveling in the madness of rush hour, especially the subway.

Clark arrives at work and expresses a dislike of his workplace, at least as it is now. He thinks back to the days he worked with Lois day to day and mourns that PGN is nothing like the days of news print and news of integrity. A dozy Clark then notices that everyone is looking up to the sky at a huge space ship.

Clark scans the ship and sees his old foe Helspont, even more shocking is that Helspont can see him too. Clark races back into the subway, changes into his armor and out through the sewers to meet the ship.

Helspont is faster and grabs Clark mid-flight. His incessant chatter begins again and Helspont reveals he is able to create his own atmosphere, he then promptly backhands Clark into the moon.

Superman picks himself up but the backhand has given him a concussion and he begins to float off into space unconscious. [From this specific point reading Stormwatch #12, Red Hood and the Outlaws #12, Hawkman #12, and Grifter #12 may help fill in some blanks if you want/care/like.]

Over in Starlight Runner Observatory, John Jones is approached by Salu, a soldier of Helspont. Martian Manhunter transforms to his original form and the two fight it out until Salu bests him in battle. She tells John that Helspont has handpicked him as an ally.

Elsewhere, Grifter wakes a now fully healed Superman. Superman is surprised to hear that Grifter had fought and beaten Helspont before escaping. A giant beast named Biomass attacks and rips the roof off the pod they're in. Superman instructs Grifter and his friends to take cover while he repairs the hull from the outside with heat vision while taking on Biomass. Superman tosses Biomass to Earth but is stunned to find Biomass now behind him and eager for a fight.

On Earth, the Florida Keys, Starfire is enjoying some peace away from Jason and Roy when she is greeted by Quom, another of Helspont's foot soldiers. When she tries to attack, Quom grabs her by the throat and asks her to recall the Tamaran legend of the Thirteen. Quom observes that Starfire has lived a life or hardship not at all like princesses in stories, informing her that her hard edge is the reason Helspont has selected her to live.

Superman uses Biomass as a battering ram and rips into Helspont's ship with powerful force. He is met almost immediately by Helspont who again can't stop talking. He reveals that he has fought other Kryptonians under a yellow sun and though he admires his persistence he viewed Kryptonians only as entertaining fodder.

Helspont questions Superman's love of life and asks if he valued also the lives of Daemonite sleeper agents he had placed on Earth years ago. Unclear as to whether it is on viewing globes or mentally projected to Superman but he watches as the sleepers are killed at Helspont's instruction.

In Washington, Hawkman attacks another recruitment agent, this time a giant red beast named Lord Defile. Defile bests Hawkman and offers the Thanagarian the same option as the others... Join Helspont or die.

Helspont reiterates his origin from earlier and his mission to save the purity of the Daemonites. Superman battles Helspont again angered by his slaughter of the sleepers. The villain explains his origin further, that he had amassed an armada after being cast out and discovered an amazing power with the power of Blue Flame. Then he set about trying to save the Daems through genetic nurturing. A metagene unique to Earth would save them and so Helspont had left sleepers behind to nurture it. This proved to be a mistake as the Sleepers grew to enjoy their earthbound lives a bit too much and neglected the metagene.

Helspont informs Superman he doesn't want to kill him. Nor destroy Earth, merely to reclaim the metagene as the spoils of his labour. In that respect he allows Superman to live to continue being Earth's protector, as his servant 'tending the fields for the coming harvest'.

Superman reveals that he had deliberately aimed Biomass's fatal crash into the ship's power cells. Helspont smiles at the Man of Steel's attempt to hinder him and reveals his blue flame can power the ship regardless. He makes a snide remark about how Jor-El would be disappointed in Superman before teleporting away leaving Superman floating in space.

Superman is shocked that Helspont has a connection to his family but is also overwhelmed with a feeling of uselessness. Helspont has proven perhaps to be the deadliest, undefeatable foe that even the Justice League and Green Lantern Corps would be powerless against.

Story - 4: The word harvest was mentioned twice in this issue and being also the reviewer on Superboy I'll admit it filled me with dread. The book however was a pleasant read, even with Clark trying out some 'cool' lingo that was admittedly head shakingly bad. I liked the fact he was back to being a more familiar Clark. No more Clark - Robert Pattinson - Kent, instead he seemed very reminiscent of Clark in the early days of Man of Steel. A love of life, culture and being a MAN, not just a Super one.

I hated the cutscenes that were essentially adverts for other books but the main story was pretty good. I am not familiar with Helspont besides his appearances in Superman, is he on par with Darkseid or Dominus in the godly undefeatable stakes? I hope someone is able to stop him talking because he seems like a decent villain. His dialogue is VERY annoying.

Art - 2: I personally HATE it when a story has to have so many cooks tending to the broth. The constant flipping of styles really tears you away from the storyline. One minute it's all scribbles and smudges, the next clean lines and bold colors, then over-detailed etc etc. No uniform style (not even in character design) means it HAS to be a low rating. sorry to all involved as each jump has a very unique style, but put together they just don't seem the marrying kind.

Cover Art - 4: A great cover to usher in the new storyline, but as great as it looks, Superman looks more like a Superboy than man...