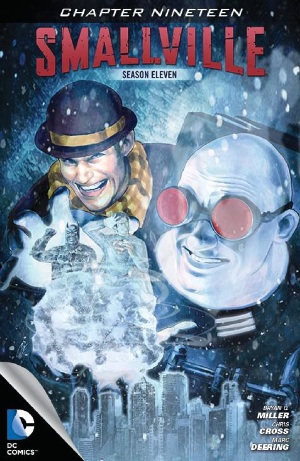 Click to enlarge
Lois Lane confronts Toyman in his cell, demanding to know about Oswald Loomis. Toyman shows little respect for the man and suggests that if Loomis is copying him, there's chance he's been using meteor rocks.

Back at the government building, chaos has ensued, brought about by Loomis's deployment of his advanced weapons. Superman tells Batman to get Joe Chill to safety, and Batman tries to do just that, but neither hero is prepared for the variations Prankster has built into his arsenal, including bullets with "heat-seeking" capabilities and others that glow ominously green...

Story - 3: Do you know how Superman and Batman originally met in the comics? Way back in Superman #76 (June 1952), Clark Kent and Bruce Wayne are paired in the same cabin on a cruise ship, the result (too-conveniently, to be sure) of overcrowding. Soon in pursuit of a suspected diamond-thieving stowaway, Superman and Batman quickly learn one another's dual-identities and agree to work together not only to bring the criminal to justice but also to protect those identities, especially from the situation-complicating Lois Lane.

Much has changed in both the real and the DC universes since then. Our collective eyes are much more widely open, as a rule, for one. But what hasn't changed in fiction is the way audiences come to believe in fabricated situations set into narrative when those situations arise organically from the characters that are in them. And vice versa. So, yeah, the "overcrowding" in that original team-up was facile but the way the characters act in the situation fits who they were at that point in their development. In other words, both were good guys who knew the other was a good guy and neither punched the other in the mouth simply for being there.

It now seems almost inevitable, as I think about that old story and some of what's happened since (yeah, especially The Dark Knight Returns, which I love for reasons that have nothing to do with Superman or his portrayal in it), that "Detective" will conclude and we'll not have learned why Batman assaulted Superman, or just how much Batman knew about Superman/Clark and his powers before they met. It hurts just to think about the mere possibility that we've seen all we're going to see. (For the record: I fully expect something will be said or done in the concluding chapter to try and close the loop, but by then it might be too late. Again, I just want to believe in their interaction, not be expected/required to accept it because they're somehow supposed to behave a certain way toward each other.)

As much as I enjoyed scrolling through the many instances of the "Fight Then Team Up" trope catalogued here, let me just suggest that the frequent occurrence of a convention in media does not validate that convention as inherently worthy. This one works for me only in comedy, where usually the use of good old self-conscious "lampshade hanging" exposes how bad (i.e., dramatically unconvincing) this stuff was when it was first being used un-self-consciously.

But I want to keep hoping something will come of it. There are five weeks to go and Smallville is no comedy. Yes, it deploys comedic relief in strategic and frequently effective ways, but that's already a feature of drama. Over the ten years of show, a good number of loose ends were left untied while a number of, uh, tight ends were unnecessarily loosened (read: excuse to mention "Henry James Olsen" again with an air of great resentment and other sadnesses).

But usually only the most broadly inconsequential things were simply ignored.

(A practice I've been working on implementing more effectively into my own life, wouldn't you know, even when lots could be said about those "things.")

In other words, "Why did Batman attack Superman?" is not "Where did Bug Guy go all that time before showing up at the reunion wanting to thank Clark?" That didn't matter, and it worked nicely as an appropriate moment of nostalgia. The fight, though, does matter - it is, in fact, to me, of singularly utmost importance - and it will be borderline insulting if it is never mentioned again until some future date and there, too, as nostalgia or laughed off in some way.

For me to accept their teamwork - to the extent, mind you, that Smallville has capacity to stand on its own as a complete world or universe - the fight should be having (or have had) actual ramifications on what has been going on in the story.

As I say, there's possibly still time. So I guess we'll see. But it's not looking good for good sense.

Points this week for moving forward somewhat on the nature of the weapons and some good lines from Prankster. Points off for the Lois-Toyman scene, which spends too long (when other business is crying out for attention) merely to demonstrate Toyman's lack of involvement in the Prankster's plans (unless a twist is coming and we're being, you know, misdirected - but anyway we already have reason to think we know Toyman is not involved, why misdirect us on this?) and to set up the Kryptonite bullets later on (which their green glow gives away to attentive readers, anyway).

Meet in the middle at 3.

Art - 5: Got a little distracted by the unusually frequent arrowheads or whatever on the speech balloons and could barely complete the Sisyphean task of following those mini-missile-bullets as they veered around corners, through doors and across multiple panels without ever actually accomplishing anything (yet, anyway, in the case of the Kryptonite bullets). Otherwise found the overall execution of pencils and colors here to be a return to top notch.

Cover Art - 5: Cat Staggs delivers, as usual. Some of the lines around Prankster's face and scarf are a tad blunt and artificial, but otherwise a winner.

Cover Art - 3: Wonderful execution, but what am I supposed to say about a cover that focuses on an element of this story about which I have made my wholly negative feelings abundantly clear? Points off just for being a lousy, manipulative and cynical choice for the cover.