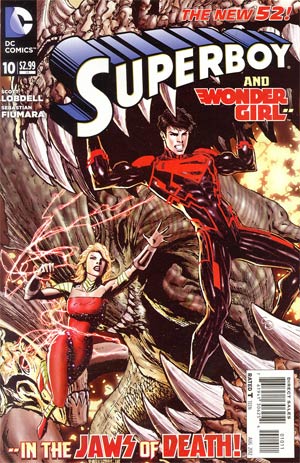 "The Mysterious Mystery of Mystery Island"

Click to enlarge
It is shortly after The Culling, Superboy is enjoying a cosy moment with Wonder Girl as they wash up on the shore of Mystery Island. Cassie is angry that Superboy is getting so familiar, especially as the rest of their friends have vanished. Trying to find their location the two fly skyward and discover the island... is a question mark.

Theorizing the other teammates might be elsewhere in Mystery Island they decide to make an aerial scan of the island. Wonder Girl is clear that she doesn't trust the Teen of Steel especially when their first meeting led to him kicking her in the face.

They land in the jungle and Cassie asks Kon if he has vision powers like Superman. He reveals that he doesn't have quite the array of vision powers but his TTK can allow him to scan areas in almost as good a fashion. He does a scan indicating the island is completely lifeless besides them and offers to give Cassie a lift to the USA.

Cassie angrily tears into Kon for giving up on her friends so easily especially after all they went through for him. Superboy angrily points out he never asked for their help but in doing so he doesn't notice a Tyrannosaurus Rex arrive and swallow him whole.

Cassie rescues him and begins beating down the dinosaur, but her anger makes her careless and Superboy leaps in to return the favor. With the dinosaur knocked out Cassie berates Superboy for ignoring his instincts. Had he been on top form and as skilled as N.O.W.H.E.R.E. had billed him, then they wouldn't be in the predicament they were in.

As evening is fast approaching Cassie takes charge and instructs Superboy to build a fire while she hunts for food before they continue searching in the morning. Kon dutifully does as told and goes looking for Cassie. He finds her under a waterfall washing off and when she snaps at him for being a perv, he proves her right by using his powers to 'scan' her earning him a pebble to the head.

Now adorned in a party dress, Cassie offers Superboy a bowl of fruit. After all the icy queen quips Cassie seems to be warming to Superboy asking him what his name is. He reveals the name Supergirl gave him and its meaning "abomination". Cassie reveals her name means "she who entangles men" and points out they are more than their names.

Cassie also asks him why he hasn't eaten anything she has gathered. He runs off his "I don't need to eat as every cell in my body is a battery" speech but Wonder Girl doesn't take that for an answer and makes him use his taste buds for the first time. Astounded by the rush of flavors, Superboy can't get enough fruit.

Kon tells an uncomfortable Cassie he used to watch her on tactical videos but could never figure out how her costume works. She tells him her lariat, bracelets and costume are always on even though you can't always see them. He presses for further information but Cassie snaps again and flies away to the shore. Superboy gives chase and perhaps overwhelmed by emotions comforts Cassie till she lets her guard down and moves in for a kiss.

Cassie beats him down and stomps him to the beach. She lets slip she thinks he is hot but before either can elaborate they notice the Tyrannosaurus Rex has disappeared. Following the tracks they head back into the jungle where they discover a trapdoor. Following through they find an upside down island and a hungry Tyrannosaurus Rex waiting for them!

Story - 3: Nice to see inner monologues to a minimum. This issue in fact marks the first time Superboy has had a proper full on conversation which was good to see. Finally seeing Superboy interact, experience new emotions and sensations was ALMOST good enough to pretend that issues #3-9 never happened. The relationship between the two teens was well executed, though both teens are still very whiney, aggressive and unlikeable.

There was a little too much cheese in a question mark shaped island and the name Mystery Island. And though fitting in with Superboy's adolescent feelings, the sexually charged scenes illustrated with smirks, boobs and dialogue like 'no jokes, no words' left me a little cold. Sure we were all randy teens once but I never thought of the Superfamily as being like that.

Annoying thing is that this issue was only 18 pages long... Value for money anyone?

Art - 5: The guest art this issue was nicely done. Slick pencil work that married very well with the script. It's the art in Superboy that keeps it alive in my opinion (it's certainly not the stories).

Cover Art - 4: A scene that actually happened! A really good rendition of the scenes inside. Again I'll say Superboy's art team are the only strength thus far.