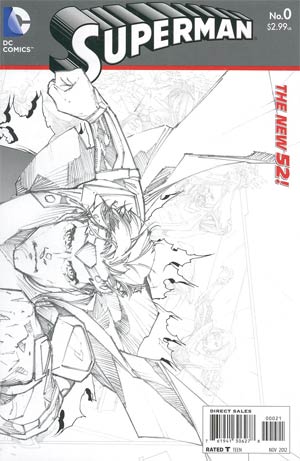 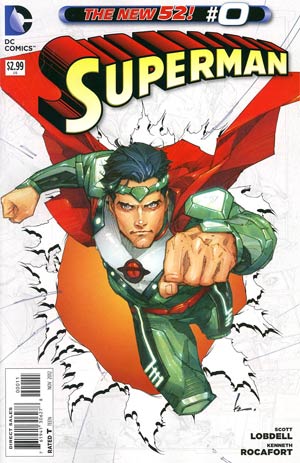 "Every End Has a Beginning..."

Click to enlarge
Jor-El was a genius, a prodigy inducted into the Science Council at just age 12. The man who created the Phantom Zone. The man who right now is recording in his log that he has discovered Krypton is dying. Kal-El is providing a narrative to his father's actions and saddened to discover there is no hope to save the planet. Lara Lor-Van patched a call through to Jor-El's Enviro-Pod suit and alerts him that she has begun ovulating. Jor prepares to leave the planet's core where he has been running tests, he wants so much to have a baby with Lara but can't bring himself to tell her what he has discovered. It is as he is leaving that Jor notices a nesting area of some kind and tries to sample some of the biological material - his curiosity gets the better of him. As he does a strange liquid-like slug attaches itself to his Enviro-Pod suit and begins to eat it! Four more slugs appear and begin doing the same and Jor frantically flies towards the planet's surface into his laboratory. The slugs cause so much damage to his Enviro-Pod that he has to shed it and, along with it, all his recorded data on Krypton's fate. Desperate not to lose his research Jor begs to return to the core with another suit, unfortunately Kal informs us that dark forces in Krypton's hierarchy were plotting to prevent his research from going public.

Jor immediately visits Kra Hu at the Core Central Complex, hoping his former teacher would be able to sway the Science Council into allowing him a second trip to the core. Kra Hu points out that Jor broke a great many rules to carry this experiment out and his actions in the past haven't made him popular with anyone on the Council though he would try tomorrow. A slightly calmer Jor returns to his wife and home, though his mind is racing. He thinks about the populace and how with Krypton's extreme gravitational pull how any of them could ever escape. Lara comforts her husband, after a night out with her sister-in-law Alura Lara reveals that she is pregnant. The news breaks Jor's mood for a moment and they embrace, though Jor's face drops quickly as an explosion rocks Kryptonopolis.

Jor realizes everyone in his lab, the Core Research Central Complex and Kra Hu were all killed in the explosion but that it was no accident. Racing to his wife he discovers that three of his former Omniversity classmates have broken into his apartment led by Arana his former class love interest/nemesis. They underestimate Lara, as Kal tells us she was a former soldier in the military, she unleashes a barrage of blows and the El's prove a formidable duo. Arana calls in back up and it is revealed that the Eradicator knows of the 'Grand End' of the planet and is determined to stop Jor-El revealing it ahead of time. Jor and Lara race out as Arana and her now backed up armed forces give chase. Arana steps back as Jor activates a Phantom Zone projector and watches as the Eradicator's soldiers are sent to the Zone.

Arana has the El's cornered and explains that the Eradicator had set up a Doomsday cult, the end of Krypton was not his goal - the end of EVERYTHING was. Arana had been trying to induct Jor to the cult but failed. Arana slumps to the floor in a pool of blood. Jor jokes with his wife that he hopes he doesn't have to break her out of the Zone again, this time for murder. Lara smiles that she is now a physician and made sure when she stabbed Arana that she had missed all the major organs. Arana gasps for breath and tells Jor to reveal their fate to his wife before she kills herself.

Amid the destruction in the El home Jor finally reveals his findings to Lara and comforts his wife and unborn child. It is then the Kal reveals he doesn't know these events from sunstone crystals or diaries but because he was on Krypton watching it all happen. Then just as a creature had in Superman #1 another emerges this time on Krypton's famed Mount Rao. It holds up a giant horn and plays a tune that can be heard everywhere. Somehow Krypton's fate has been altered, given a second chance at life, and the creature has summoned his master before he kills himself.

In the creature's own words: "Whether Krypton lives or dies... ...now weighs upon the shoulders of its Last Son!"

His master? The one who knows all the past, present ad future - THE ORACLE.

Story - 4: I never thought I'd enjoy this issue. I'll admit after months of Superboy devastating his fans and the bizarre merry-go-round of creative teams on this book I suspected that Scott Lobdell might have been hired to ensure Superman would be cancelled for good. Imagine my surprise when this issue turned out to be pretty good. I enjoyed the version Superman: The Animated Series did on Jor and Lara's last days and though this was a direct adaption substituting Eradicator for Brainiac, it did throw in some solid storytelling. I liked that Lara shares some traits with Lois Lane, it goes a long way to explain Clark's attraction to Lois after his girlfriends past (assuming Lana, Lori and Lucy are still canon of course). I like Jor's emotional struggle and the chemistry he has with Lara, it definitely echoes Lois & Clark's relationship. If there is one thing I will fault it's Kal's narration, it was not only unnecessary but awkward, cheesy and irritating. It would have been a far stronger issue without it. I hope his voyeurism is explained, as the 'twist' that he was on Krypton (along with Kara and Kon) came off as frustrating in a "WHY aren't you doing ANYTHING!" way.

I didn't get Oracle and the horn blower's side story back in #1 and now it's repeated I am even more perplexed. So if anyone out there can fill me in on if it's related to any of the other New 52 titles, that would be great.

Art - 4: I like Rocafort's art. It's a great style that I'm looking forward to see fleshed out in the title. Something that I miss in the Superman books is that they have no style and consistency. Superman in particular has had no specific look. In the Perez arc the art was incredibly detailed but everything he built was promptly shelved when Jurgens brought back retro art. It was annoying to see Clark's height and physique alter each month along with hairstyle, his age, spectacle style... and for the love of Rao can DC decide what the S shield actually looks like? (No I'm not kidding - take a look at the shield though the past 12 issues).

I hope that Rocafort can change all that now that he's at the drawing board.

Cover Art - 3: A nice stock pose but considering the story inside it would have been nice to see Jor and Lara both sharing the limelight.

DISCLAIMER: SUPERMAN and all related elements are the property of DC Comics. TM & Â© 2022