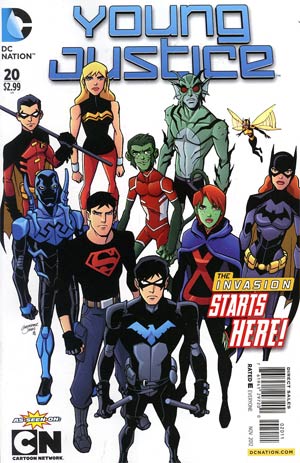 Click to enlarge
Five years ago, Robin enters The Mount and is greeted by a birthday kiss from Zatanna the newest member of the Covert League. As an alert on Dick's computer wakes him up, it's five years later with Artemis and Wally video calling with a birthday greeting. Dick's date, Bette, wakes up and greets him. Just as she approaches Artemis catches a glimpse of Bette recognizing her but Dick ends the call.

Bette sees a Gotham Academy yearbook and realizes they went to G.A, before she can quiz him further she realizes she is late for work and the pair separate, with Dick arriving in his new identity. The Covert League is now far bigger then before but present for duty today are:

As Rocket and Zatanna arrive the team are puzzled as to why the two newest Justice League members haven't gone direct to the Watchtower. They surprise everyone by offering kisses and birthday greetings to Nightwing. The girls then leave and Robin nudges Dick and though refusing a kiss offers his birthday wishes before leaving to join Batman in Gotham.

After what has gone on recently, Nightwing pulls Conner and M'Gann aside and asks if they can still work together as a team. They assure Dick that he has nothing to worry about and he proceeds with a briefing. Nightwing splits the members into two squads, Alpha for himself and Beta for M'Gann. Beta team is dispatched to Metropolis, consisting of Bumblebee, Batgirl, Superboy, Beast Boy and Lagoon Boy aboard the Bio Ship. Unfortunately due to his appearance La'Gann can't hide in public like the others.

The mission is to prevent an assassination attempt on Noor Harjavti. Noor is in the U.S. to raise funds for the Quraci Democratic party and since her father was assassinated himself, Noor is the only one speaking for the people of Qurac against the Bialyan puppet regime.

Queen Bee is almost certain to attack so the team have blended into the crowd at a public demonstration.

Five years ago in Qurac, a young boy, Garfield watches a speech on the news by Noor's father, Rumaan Harjavti. Gar's mother calls out that Megan and Conner have arrived to visit their animal sanctuary home.

Today Wonder Girl expresses gratitude to Nightwing for his handpicking her for his Alpha team. Nightwing admits he was as enthusiastic as her back when the Covert League formed, and as she was the newest recruit he couldn't think of anyone better to recruit the next member, The Blue Beetle! At the same time over in Metropolis, Noor is protesting against her uncle's dictatorship but so far nobody has made a move to kill her.

Back in Qurac, five years ago, Superboy has picked a bunch of flowers for Megan. Garfield smiles at the sentiment but points out the flowers are poisonous. Megan refuses to let Conner beat himself up over his mistake and kisses him tenderly. The kids look over at two strangers talking to Gar's mother, she walks them over to the house and introduces Garfield, her new daughter Megan (a welcome surprise of acceptance to M'Gann) and her daughter's boyfriend Conner.

Clark Kent and Jimmy Olsen smile and introduce themselves as reporters from the U.S. for the Daily Planet. They had heard about the hard work Garfield's mother had been doing at the sanctuary and wanted to fit in a story about it whilst in the area to cover the impeachment hearings.

Megan lies that they were doing the same for a civics class earning extra credit. Clark is impressed that he wasn't as resourceful as a kid and offers them a lift to the hearings with an offer to get to know them both better. Conner is uncomfortable with Clark's pushy attitude but Megan's mother assures him that it is all part of his job as a famous reporter.

Years later, as Conner spies on the crowd Clark appears and tells his 'brother' he had requested this assignment and they both smile for the first time in a while. In El Paso, Rio Grade High School, Dick and Cassie are talking about the newest recruit. Dick tells Cassie that several heroes; Peacemaker, Captain Atom and even Guy Gardner have all praised Blue Beetle, aka Jaime Reyes.

Cassie asks about Ted Kord, but Dick tells her that Jaime has no links to the original Blue Beetle, he stumbled onto the scarab armor and has no professional, skilled training. Dick then instructs Cassie to approach Jaime before school and though she takes him by surprise by revealing she knows his secret identity, he doesn't attack. Just as he might, Dick approaches and offers the hand of friendship.

Back in Metropolis Jimmy sees Conner and Megan and is surprised that they don't seem to have aged at all in five years. Psychically Megan adds Superman to their frequency and with his seasoned skills he quickly informs them that a known associate of Queen Bee, a tattooed stocky man named Devastation is pushing his way through the crowd. Superman makes his excuses to slip into costume but as he does a glowing light abducts Superman, Devastation and Conner!

Elsewhere, in space, the kidnapper activates several consoles and is revealed to be the collector of worlds... Brainiac.

Story - 4: The leap into 'Invasion' isn't handled well. The assumption is that we've already seen some of the episodes. It's a shame if you're a fan that only reads the comics as it's a bewildering experience, especially with the time jumps. That being said you can get up to speed and the story itself is pretty cool stuff. I still stand by my comments that this is one of the best, most immersive books that DC is publishing. Perhaps some of the story is a bit too complicated for some younger readers though.

Art - 5: It's so good it's like screen grabs of the animated show.

I am a big fan of the art, it has grown with the title.

Cover Art - 5: The cover evokes memories of the Superman/Batman cover a few years back, but I have to say it's a format I really like. It looks very cool. I don't think anyone can deny that. It may even be my favorite of the series so far!