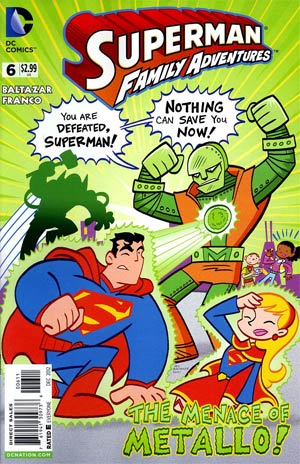 "The Menace of Metallo!"

Click to enlarge
The Superman Family heroically intercepts the latest meteorites and rocketships they find on collision course with Metropolis. This particular rocketship is piloted by one Captain Jack Corben, who has passed through a Kryptonite asteroid field and is now feeling ill. Superman suggests taking his ship to STAR Labs for further analysis.

Later, Dr. John Henry Irons discovers a connection between an alien technology that has fused with Corben's ship and Lex Luthor's battle suit. He doesn't know what the connection is, but assures Superman he will continue to work on it. Corben, meanwhile, is visited at Metropolis Hospital by Luthor, who informs the sick pilot that what's ailing him is Kryptonite poisoning and that it's Superman's fault. Corben, apparently, is transforming into human Kryptonite, but Luthor claims to be able to save him.

At the Fortress of Solitude, Krypto is waiting for the Supermobile to move so that he can chase it. Fuzzy is unimpressed.

Back in Metropolis, a lead-suited Corben arrives on the scene and demands that Jimmy Olsen summon Superman. Jimmy does, Superman and the Family arrive, and Corben reveals his new ability to subdue them. He also says that he should now be called Metallo.

Meanwhile, Dr. Irons is alerted to this new menace by his niece, Natasha. Grabbing a nearby hammer and donning Luthor's battle suit, Irons races to the rescue and provides a sufficient distraction so that the Family can retreat to the Fortress for reinforcements - namely a lead suit of Superman's own and the Supermobile, the retractable arms of which Superman uses to trap Metallo and encase him in a lead box.

Dr. Irons now goes by the name of Steel and is welcomed into the Superman Family mere moments before Jimmy reappears, reporting that Solomon Grundy is rampaging through the city. The Family rushes off to the job, leaving Corben behind to wonder at his fate.

Meanwhile, Ma Kent isn't going to take it any longer. Solomon Grundy keeps punching the Family members into her barn as soon as she finishes cleaning. Her solution: Take the bus to Metropolis and drag Grundy by the ear back to the farm to do the cleaning himself!

Story - 4: Both the promise and the problem of the kind of writing that graces this title is that it is unconstrained by logic - not wholesale, not forever and always, but wherever it's convenient to a plot development or a gag. And that's generally ok - it's why Luthor can appear at the end of an issue as a janitor sweeping the exact back alley he needs to be in to find some discarded Kryptonite and we can go along. Especially in a book for kids, it would be too much to expect plotlines to twist and turn too complexly.

But the problem is that, as the issues pile up, there isn't much anchoring the present to the past. There's no genuine continuity - some, but not enough that you feel you're reading installments in a grander narrative.

You have to take each "adventure" on its own, which I think would work better if, for instance, we moved completely past the formulaic opening scene that has really started to evoke in me the feeling that each issue is too much a carbon copy of the issues that came before.

I can speak only as a guy in his mid-thirties reading this to his nephew who is only three. Neither of us is especially enthralled any longer, not the way we were at the outset. We just enjoy the time together anyway. And, maybe more than ever, this is totally a taste thing. Probably if I was 10 I'd be loving every moment spent in these pages. But I'm not, and I'm not.

So my bottom line is currently as follows: This book continues to be everything it's supposed to be, but it's still already starting to feel stale. Will it conclude when we run out of new characters to introduce (which right there could certainly take awhile) or will it evolve into something bigger and more cohesive? Time will tell.

I can tell you I'm still keen to see it grow, if for no other reason than to see how Forrester grows along with it. I mean, it's going to be a while before he and I read and/or talk about the "Death" arc together, and what I like most about Family Adventures is that it's "safe" enough for me to be able to try and instill an early appreciation for the world's greatest superhero in the newest generation of my own family.

But, at least for now, I can't continue to think of it as essentially perfect writing. It's great, does the job, but it's not perfect. (And maybe I'm too old.) Accordingly, 4 of 5.

Cover Art - 5: Another great and classic kind of cover - we know just what the stakes are, but not too much. And who is that shadowy figure in the background???