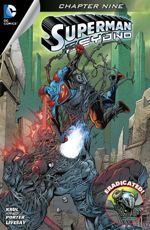 Click to enlarge
While laying the boots to Metropolis via the giant robot (that turns into a skyscraper...), Lucinda has doubts whether or not Superman will show up and do what he does best. Her holographic father, Lex Luthor, assures her that the Man of Steel will show, despite the ring of kryptonite orbiting the planet.

As Walker, the now hulking, juiced-on-nanotechnology supercop makes vain efforts to slow the robot, Superman zooms in to the rescue. The Last Son is sporting Eradicator, having initiated the protocol in order to bypass the kryptonite radiation permeating the troposphere. During his struggle with the robot, Superman is forced to fend off Walker, who attempts to absorb the Eradicator technology right off of Superman's back. Whether well-intending or just cuckoo for Cocoa Puffs, Walker is a nuisance and Supes lays down the rules, shoryuken style.

Now free to concentrate on the robot, Superman makes short work of the mechanical menace. Facing the justice of the Man of Steel, Lucinda blathers on about how it is Superman's fault that she grew up not knowing Lex was her father. In what would seem to be psychobabble, holo-Lex rhymes off a few lines from F.W. Nietzsche, a dark prologue to his master plan: form a gigantic sphere out of the kryptonite fragments for the destruction of the entire planet!

Story - 3: This entry in the title didn't feel as smooth as previous efforts. The story carries on swimmingly enough, but I found the dialogue rigid; it didn't feel urgent when it should have. Superman's final line in the issue, for example, is "He's going to destroy the whole planet." As a writer, I spare using exclamation marks. They have a time and place just like question marks, but they can be overused, especially in the comic book medium. That line right there, when Superman exclaims something significant, is exactly when an exclamation mark should be used. This isn't a minor quibble. It is fully and completely poor editing, more so when we consider this - "Whooa. Not good. Not! Good!" - was green lit.

A lot of the characterization is starting to feel a little heavy. A few reviews back I decided to drop, for the enjoyment of the story, my bewilderment concerning Lucinda's lackadaisical acceptance of hologram-Lex Luthor telling her she's his daughter. "Yeah, sure, why not? Yer my Old Man. Fine, sure, yeah, I'll hate and want to kill Superman, too." No need for exclamation marks with that kind of indolence. Suddenly, though, we have a reason for Lucinda's own hatred for Superman: it's all his fault she didn't grow up with a father. Where did that come from? I guess Lex implanted the idea in her mind, but it's rather tossed at the reader rather than constructed effectively into the plot. We may still get that, to be sure, so I'll remain on the sidelines with this tidbit for the time being.

Superman gets the prize for the worst line in a digital comic book: "Why attack me? You don't even know me." Good gravy. It's made up for by the fact that he's wearing Eradicator tech. That's all kinds of awesome.

It was interesting to have Luthor quote from Nietzsche's Also sprach Zarathustra. This is one of the books which popularized Nietzsche's famous "God is dead" allegory, and although the quotes used come from different parts of that book, connecting them to Luthor was a signature moment accentuating what has made this title, for the most part, excellent. It would have made for an even better experience to have Superman recognize what Luthor was saying, but alas...

Overall, while the dialogue rubbed my rhubarb a little bit, I still enjoyed this issue. There's enough going on to keep the juices bubblin' hot, particularly with the massive kryptonite ball set to bounce upon the planet! (See what I did right there?)

Addendum: What the hairy heck is going on with this release schedule? If Snoozeville, er, I mean Smallville can get a steady release schedule, why can't Superman Beyond? Look out for issue #10 coming on the 27th.

Art - 3: Nothing much to say that I haven't said so many times already. The art is wicked when it's at its best, and numbing to the eyeballs when it's at its worst. Most often, it leans to the latter. Porter's Eradicator looks excellent, but ultimately the art is still flat. It lacks any weight or dimension in the action sequences, which were particularly confusing in this issue.

Answer me this: Why is inker John Livesay suddenly going as simply Livesay?

Cover Art - 2: The covers come at an odd pace with digital-firsts and don't seem to be of much importance to the creative teams or DC. This cover loses points for being a near replica of the cover for issues #5 and #6.