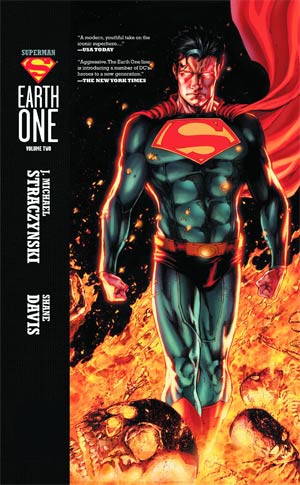 Click to enlarge
I have a small problem with the way Biblical (specifically New Testament) allusions are used in Superman stories, but it's not with the stories themselves or even with the allusions. It's because I worry (just a little, mind you) that the tendency of people to take specifically Jesus literally (as opposed to, say, Horus) will translate to taking the idea of Superman literally - the idea, note, not the character (though that, too) ... more specifically, one interpretation of that idea: salvation. My worry is that they will literally believe they themselves "need" a savior rather than be inspired, maybe, to be one.

Not literally, in the heaven and earth sense, but in everyday ways, big and small alike.

Just the way Clark recognizes it here in Superman: Earth One, Volume Two, J. Michael Straczynksi's and Shane Davis's follow-up installment to their New York Times bestseller Superman: Earth One, in which a supremely powerful and intelligent Clark Kent sets out in pursuit of personal wealth and comfort and only emerges in the end as super-heroic Superman when a threat of interplanetary and necessarily superhuman proportions forces him to take great responsibility for his great powers.

In this second chapter, Clark is trying to settle into a new life as a cub reporter on the Daily Planet. He has just published and received acclaim for the first and still only interview with the newly arrived Superman but lives in a low-rent Metropolis neighborhood surrounded by misery. Not to mention, apparently, sexy ladies - or, one sexy lady, anyway, one Lisa Lasalle (I will say it here and only here, just to be clear: I groan at the always and everywhere double Ls, call me a heretic), the Mary Magdalene of this story to Clark's Jesus.

(Of course, I recognize that, in addition to being a holy book to a great many people the world over, the Bible is a significant work in the literature of Western Civilization and is widely quoted precisely because it has been so widely read. I happen to prefer parallels of story (like Lisa/Mary) to straight quotes (which in Earth One, Volume Two there's, like, only one), but in any case I'm not looking for a fight over the Bible just now, k? Maybe later?)

Against this domestic backdrop, Clark, as a Superman struggling in his own way to find his place in a schizophrenic world, encounters Parasite, aka Raymond Maxwell Jensen, a professional (and evidently lifelong, even if he really did love his sister) sociopath who comes up against the wrong security guards in the wrong place and gets bombarded with "high energy neutrinos," an experience that grants him the ability to absorb energy, especially from other people (to the point of death), but completely deforms his body (a little too symmetrically for my taste, but this is a small fault to point out in Davis's generally astonishing work).

In order to save the day, Superman has the AI technology in his ship (which has also quietly been building the good old Fortress of Solitude in standard polar climes) create a full body protective shield - a "warsuit" - to temporarily protect him from Parasite's energy drain powers, which had on initial encounter deprived our boy of his abilities. It's a close call, but in the end Superman, who learns his most important lesson yet when he finds himself as vulnerable as the humans he has come to protect, prevails.

Story - 4: The lesson, of course, is that the powers don't make the hero.

It's this capacity of the super-hero genre - the capacity to inspire us to be more than we are -, and as realized in the Superman mythos especially, that makes me a fan. I mean, I'm not a cosplay kind of fan, but I do wear it in my way.

(Hi! Have we met? I write regular reviews here at the Superman Homepage, a fan site. LOL.)

My bet is you do, too. And also that you have, at one time or another, experienced the kind of inspiration I'm talking about.

It also stands in nice, appropriately humanizing contrast with the lesson he learned in Volume One: namely that Peter Parker is pretty much who he is now. Ha! Not really. It was that the powers are only transcendent and redemptive if they are used to those ends... "with great power comes great responsibility," right? - which, come to think of it, is pretty much the primary theme of all super-hero fiction ever, so why again does Spider-Man get the monopoly on this? Is it just the phrasing? We know the phrasing, not the substance, defines the cliché. Right?

Anyway, here he learns that the powers don't make the hero. It's an important lesson to learn, and one that is pretty much required of any incarnation of Superman I'm going to be willing to recommend. In this case, it's also a bit of a relief, since the pace of character development in this story is very slow.

Because I think that's really my main objection to these books - although they are in most ways (especially unto themselves) masterpieces, they have, to date, appeared too far apart. They're not exactly feature films or 400-page novels, but do they really need two years between installments?

I do have criticisms of some of the details - for instance, I could really have done without "Lex Squared": it's difficult enough to believe in one impossibly intelligent and immensely wealthy individual (which, yeah, you pretty much need to provide any kind of counter-balance to Superman), but two of them, with essentially the same name, who are not only impossibly intelligent but also physically perfect and immensely wealthy? It's too much for me, man. The whole thing is clearly a way to signal to the longtime fans that if we thought Lex Luthor was badass, we haven't seen anything yet. Just imagine: two of them! But, to my sensibilities, it would have been better if this Alexandra Luthor person was called, well, almost anything else.

I also found the sexual content to be out of place, as mild as it was (though nowhere nearly as mild as any of the monthly titles) and as much as it was in no way an affront to my general sensibilities about these things. Lisa being an occasional prostitute is one thing, not least because it's how you establish the Mary Magdalene parallel. But the Lex2 (sigh) bedroom scene showing everything and nothing of the two of them serves no story purpose whatsoever. It maybe characterizes them as truly the most perfect, well-adjusted and physically healthy humans on the planet, but that's a stretch.

Anyway, it's not really a big deal. I'm an adult and I'm not exactly objecting to it. I just found it to be out of place. Come to think of it, it's probably because I do object to Lex2. There, that was easy.

Superman's "If you believe it, that's good enough for me" to General Samsa (ooh, easter egg reference to Kafka's parasitic Gregor Samsa from "The Metamorphosis"???) after pretty much leading the dictator to slaughter also struck all kinds of the wrong kinds of chords. My Superman is not this cold, does not leave even obviously evil dictators in the hands of bloodthirsty mobs, however righteous those mobs' blood thirst might be. My Superman is a law and order kind of guy - both symbolically (so that he can compare gunshots to votes) and literally (so that he would seek out institutional justice - imperfect but at least ostensibly of the people). He's an ideal, not a reflection of actual reality.

No, I didn't miss the scene where Clark on the phone with his mother acknowledges his doubts about working within the system. I'm not saying the coldness is random, I'm saying, like the overt sexuality, it's out of place.

It gets Superman wrong.

When Straczynski said in his dedication to Volume One that the symbolism of the S-shield means "anything is possible," he was more or less right. But you can't have anything at any time, unless you're trying to create contradictions. You have to make choices, and each one closes off another. Of course, I assume he gets that, too, even if I personally disagree with some of the choices he made here. Oh well, I'm going to let myself see the coldness for now as set-up for still more growth in chapters to come, assuming there are more, though the late introduction of the Luthors and the final scene in the Daily Planet after Clark has found out that Lois has been looking into his past would seem to make it very clear that at least one more chapter is pending.

I will be expecting some follow-up to the story in Volume One, especially concerning the identity of whomever contracted the Dheronians to exterminate the Kryptonians. That was, to my mind, blockbuster reimagining, and it burns me rather a lot that I have to keep waiting for both revelation and further clues. For this reason more than any other, Volume Two's story gets its 4 of 5.

Also, I can wait if I know the answer is coming.

Art - 5: It's clear Straczynski is a master of form (I also pretty much can't say enough good about Shane Davis, so I'll leave it at that and the 5 of 5 the Art and the Cover get for their Superman Homepage ratings) - initiating new scenes on the tails of the old (not always seamlessly, but still), parallel conflicts to underscore themes, etc. He also has a knack for story innovation - despite the countless takes on Superman's origin out there across media, and my criticisms above notwithstanding, this take still manages to feel mostly fresh.

You and I, we may quibble over details - here or in my regular reviews of Smallville: Season 11 especially - but I think, if we're reading this book and then coming here to read about it, we're all on the same side of the table. No? At least, if we're coming here out of whatever love we have for Superman (and Family).

The trick is not building a religion out of it.