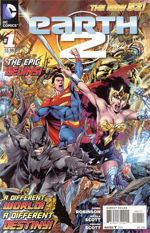 "The Price of Victory"

Click to enlarge
Five years ago, parademons from Apokolips attacked Earth 2, much like they did Earth 1 in the first issues the New 52's Justice League series. Unlike Earth 1, unfortunately, there is no Justice League in place - not even a fledgling one - to ward off the attack. Superman, Batman and Wonder Woman fight alongside the world's soldiers in a valiant effort, but Steppenwolf and the hordes of Apokolips are just too much. Amazon Island is gone. Metropolis has fallen. Diana's sisters and Lois Lane are dead.

In a last ditch effort to end the atrocities once and for all, the Man of Steel and the Amazon Princess attack an incredible number of parademons, providing both cover and a distraction for the Dark Knight as he infiltrates one of the Apokolips beacon towers. His plan is simple: install a virus into the system and bring down the armies of Apokolips.

It works, but at a heavy price. Wonder Woman is fatally wounded by Steppenwolf, Superman appears to be incinerated, and Batman is forced to sacrifice himself in order to install the virus.

Fast forward to the present, and the world is still reeling from the aftermath of the Apokolips War. Alan Scott, owner and CEO of a major corporation called G.B.C., is traveling across the world after narrating a documentary about the world's recovery, and a young Jay Garrick is struggling to find his place in the world. Garrick's brooding is interrupted, however, when the Greek god Mercury visits him with this message: "The earth is in peril anew... a greater evil still... and it needs a hero."

Story - 4: Wow. That's one heck of a first chapter. I'll be honest. Initially, I was ready to yawn as we started what looked to be a reworked version of Geoff Johns' story in the first issues of Justice League. Yeah, DC... very clever... new outfits, same characters but with a little depression thrown in... haven't seen THAT before...

Then, Wonder Woman died. Then, Superman. Then, Batman. Ok, DC, you have my attention.

I haven't read much news in the months leading up to this title, so I didn't come in expecting these characters to die. I had no expectations, in fact, just mild curiosity. So, yes, I was surprised by this. Diana's death was befitting of her warrior status. Batman's was easily the most gut-wrenching and powerful, as he gave his final words and orders to his daughter Helena, Earth 2's Robin.

Superman's death? Well, that's the only thing that keeps this from being a 5. I'm still not sure if he's really dead or just teleported somewhere else. Death is never permanent in comics, but I still like it when I can tell if I'm supposed to believe the character is dead. This was a bit confusing. Maybe that's what they're going for, but I don't care for it.

Otherwise, this issue was pretty stellar. I'm curious to see what happens with these new versions of Alan Scott (Earth 2's Green Lantern) and Jay Garrick (Earth 2's Flash). Let me just say, for the record, though, that Garrick's former girlfriend is a witch with a capital B.

Art - 4: This issue starts with some spectacular visuals, and the art delivers on ever panel. James Robinson's story demands some pretty frenetic momentum in every panel, and Nicola Scott delivers.

Cover Art - 5: I like covers that are both interesting and also give a teaser for the story inside. This one does just that. Superman, Batman and Wonder Woman battling a horde of monsters isn't exactly groundbreaking, but it still works if done right.

And it is here.

Variant Cover Art - 3: It's a good picture, but it's just not that exciting. Superman, Batman, and Wonder Woman leaping into an unknown fray? Even with tweaked costumes, it's just kind of dull.