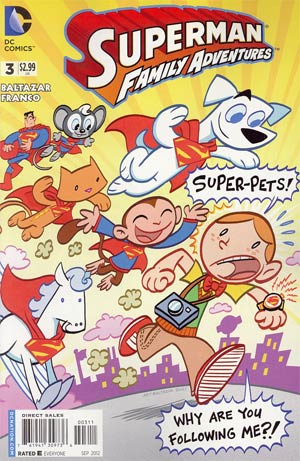 Click to enlarge
Another meteor is on the way to Metropolis, and Perry White believes that stories should start wide and then narrow in. On assignment, Jimmy Olsen admits he knows Superman and boasts of his special watch. A doubting bully's aggression convinces Jimmy to use the watch, but the signal is answered not by Superman but by Beppo the Super Monkey!

But wait! It gets worse!

Aliens invade! Jimmy uses the watch. Again, no Superman, but Streaky the Super Cat instead. Then Comet the Super Horse, Krypto the Super Dog, and finally Fuzzy the Super Mouse! Jimmy is confused but the Super Pets defeat the aliens (!) and all is well. Then Superman appears and explains to Jimmy, in front of everyone, that he, Superman, had made a mistake and given Jimmy the wrong watch.

Next up, a powers lesson for Streaky from Krypto with a dark secret!

Finally, here's why only the pets arrived to repel the invading aliens: Clark says something that Superman has said before to Lois, and Lois gets suspicious. To correct his mistake, Clark initiates "Operation Pink," which involves the assistance of Superboy and Supergirl at the Fortress of Solitude and the deployment of a Superman Robot. Except, oops, two robots are deployed!

Story - 5: Evidently, opening these stories in exactly the same way each time continues to keep Baltazar and Franco in high mirth. Fair enough. I'm ready to move on, despite the grown-up "inter-textuality" this time out in Perry's "that's how stories should start" remark. That stuff isn't so very cutting edge anymore.

Beyond that, well, frankly, this whole issue had me chortling genuinely out loud - especially the third "act" and the chorus of "Golly gee, Lois" from the multiple Clarks. Also, the Donner film references were very well-timed. Forrester, I think, was entertained more by me than by the book, but as I keep saying, he's only three. I perform it a bit when I read it with him. Wouldn't you?

Anyway, I'm still finding the lack of proper titles for the stories a little peculiar, but at bottom my thing is just the formality built into the review format, which includes a title. I'm otherwise cool with a series of unnamed individual adventures under the umbrella title of "Superman Family Adventures." Indeed, given the target audience in particular, that's probably enough specificity. Thus, no decline in score.

Art - 5: "This work is exactly what it's supposed to be - iconic, expressive and simple. And all of those things consistently.©"

Cover Art - 5: This issue was different from the previous two in that the captioning on the cover has no special embellishment to it, which, when combined with the continued exclusion of a proper title page, confounded my determination of what to call this chapter in the Adventures. But see above. As far as the art itself is concerned, it's both everything it has to be and everything it should, as usual.

What more can I say?