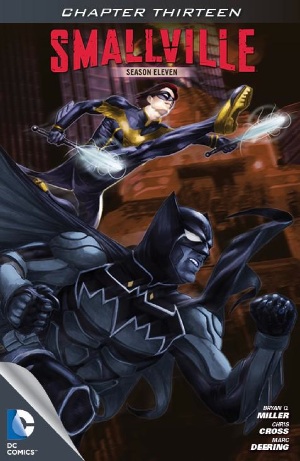 Click to enlarge
Lois and Clark get all frisky in the Fortress of Solitude, despite Lex Luthor's ability to track Superman's every global move by satellite, thanks to some sleight of hand enabled by Queen Industries' satellites. "All-seeing" A.I. Jor-El is no longer functioning, and Clark is hard at work using the Fortress's technology to rid himself of the isotope to which Lex exposed him. In Gotham, a gang of criminals, working with Metropolis' Intergang, are foiled in their machinations by Nightwing and Batman, who decide to go to Metropolis upon learning of the involvement of one Joe Chill in the criminals' plans.

Story - 1: I just... bah. That was dreck. They couldn't even wait a couple of issues to put Lois and Clark in the same room together after Lex's revelation of the radiation tag and had to use some of the most unnatural expository dialogue I've seen in a long fricking time to justify it? He got a "split second" for the Fortress to "beam" him up there, thus foiling Lex's satellite? So, it reads the isotope only when Superman is in motion? It can't read him in the Fortress?

Give me a break. Epic fail. I can't even be bothered to try and dissect this, and the less said about the "romantic" focus of the Clark and Lois scene the better, frankly. Is the 12-18 year-old female demographic still the target audience for this nonsense? Jeebus.

Cut to Gotham, where "Nightwing" toys with a gang of baddies sounding for all the world like a cocky young Dick Grayson (while showing a fetish for violence more akin to Damian Wayne), which just completely underscores the raw insanity of using Barbara Gordon (never mind the aborted Stephanie Brown) as Nightwing to begin with.

Really, the only redeeming thing in this story was Batman chastising "Nightwing" for "showboating." That I believed.

Art - 3: This is largely competent work, except for the fact that character's faces don't much resemble themselves from panel to panel, to say nothing of resembling their real-life counterparts (which is less troubling to me; I just wish they'd make up their minds about it). Layouts and whatnot tend to work, as do environmental backgrounds and the like, but I don't much care for the design of Batman's mask (the cheek protectors in particular), and Nightwing's face reminds me of Harley Quinn from the Animated Adventures, which I think is unfortunate.

All in all, between story and art, this is a step backwards.

Cover Art - 5: Cat Staggs continues to turn out strong, iconic work in her covers. You'd think there would be a Superman somewhere in there, but I'll get past that and expect the next update in four issues or whatever to include him in some capacity.

Cover Art - 3: This is good art but it is an example of one of my pet peeves - covers that mislead the reader about what's actually in the book. I.e., Cyborg Superman doesn't get anything like this kind of advantage over Superman; is, in fact, dispatched rather handily; and is not even the real threat that Superman is facing (Lex is, with the radiation).

Once upon a time, I was Editor of a magazine that sold its front cover as advertising space, where the advertiser would work with our designers to employ some kind of novel printing technology to convey something about the advertiser's brand. Needless to say, I hated this and fought against it at every possible turn, eventually leaving the magazine over the fundamental divergence of philosophies with the magazine's publishers (the cover thing was just one - the most serious - of multiple examples).

This sort of thing does not only the reader but also the publication itself a disservice by prioritizing flash over substance and thwarting the reader's ability to determine whether there's anything about the issue besides the cover that will interest him. In the case of this cover, it may be dramatic, but there's no payoff. It's misleading, and thus unfair.

Oh but wait, that's Smallville for you. Zero cajones to make tough choices and live with them. You'd think I'd be used to that by now? No chance.