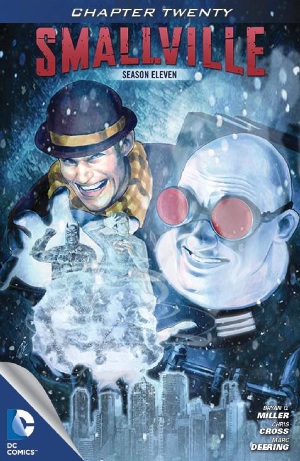 Click to enlarge
Oliver and Chloe call Lex in an effort to hack Lex's satellite and advance their investigation into the emails Lex has evidently been sending to Oliver. In the process, Tess appears and distracts Lex while Chloe notices that Superman seems to have been neutralized.

At the safe house (where Lois has been unable to find out what's happened or to get inside), Prankster and Mr. Freeze make their escape, having encased Batman in ice, wounded Superman with the Kryptonite bullets and seemingly killed Joe Chill. Batman manages to break free and finds Superman, unconscious and probably dying. Eager both to protect his new collaborator's identity and save his life, Batman beats a double retreat, calling in mechanical back up.

Enter (and immediately exit) the Batmobile, with Metropolis's Finest and Lois Lane alike in hot pursuit.

Story - 5: I have nothing but praise for this week's issue. From the opening scene with Lex and Ollie on the phone to the commencement of the chase at the end, everything made sense, flowed logically and well and didn't leave me scratching my head even once.

Let's simply bask in that, shall we? Cuz when it works, it just works.

Art - 5: Also top notch this week. Indeed, "art" and "story" are working here in the kind of near-perfect harmony I only wish we were seeing all the time. The altered red/black color palette in the two Batman flashback scenes is especially sublime. I'm really rather impressed.