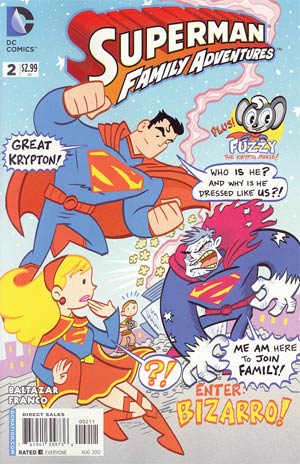 Click to enlarge
A square (!) meteor falling to earth and nearly killing Jimmy Olsen (on his day off!) turns out to have Bizarro for a passenger! Supergirl, hanging out with the Tiny Titans (!™) at the Fortress of Solitude (!™)©, hears Jimmy's screams and flies off to investigate with Streaky the Super Cat in tow! Supergirl catches a bunch of things that Bizarro throws at her! Superman arrives on the scene and, upon attempting to school Supergirl and Jimmy on the Opposite Universe, is caught off guard by Bizarro's backhand! Superman is knocked clean to Smallville (and into the Kent Farm!) but does not stay for dinner! Returning to Metropolis, Superman discovers that Supergirl has mollified the enraged Bizarro with ice cream! Now befriended, but later (!), Bizarro wreaks havoc at the Fortress of Solitude! Green Crystal A.I. Jor-El is a fashion plate! Superman returns just in time to save the Bottle City of Kandor! Ice cream solves every problem! Jimmy gets a very special watch!

Story - 4: This was more good times for the kids and for the uncles and dads and others who enjoy watching those kids have good times with reading. But, alas, post-good-times for the analytically-inclined can be tough going. Not as tough as it can get for certain reviewers of Smallville properties ((!)™), but tricky, at least.

For instance, it was hard to follow this at first as a single story, what with the "Superman Family Adventures" logo, but no other indicator of change, repeated a few times throughout the issue. Thanks, Marketing Department! Can you get me some ice cream?!

Ok, so the repetition is presumably meant to signal shifts in time and/or space, but when the overall story itself doesn't include a title (except the "Enter Bizarro" on the cover), it's hard to know just what kind of shift is meant in any one instance - time and/or space? The initial sense, in any case, is that they are possibly independent tales, again given the lack of any proper interior title page. And that's kind of awkward, maybe especially for uncles like me who are the ones trying to make sense of this for the next generation. And just imagine how not-quite-yet three-year-old Forrester feels.

Opening the narration on "Meanwhile," meanwhile - which, if the cover is supposed to be read at the start of this sequence, places meanwhile backwards in time - probably had Baltazar and Franco in stitches a lot. As, I'm sure, did beginning this issue exactly the same way the first issue began (only, what... opposite? Is a three-dimensional square the opposite of a sphere?) Will they keep this up? I predict yes for exactly as long as it continues to keep them in stitches. Which means, probably not. Forrester didn't notice at all and just said, "What's that? Flying ice cube?!"

But anyway, it doesn't seem fair to examine this book as anything more than a diversion, on which level it continues to succeed admirably. Seriously, I mean controlled, tightly structured and well-paced this may be, but literature it is not. And you can do literature for children. (Possibly also for adults.) But nor is this a judgment on that score - it's just what it is.

For instance, I'm not going to get into how "talking backwards" does not describe Bizarro's grammar and that it only describes, at best, his frame of reference for negation. K? It's backwards only the same way that squares and circles are opposites. In your imagination, where all the fun lives.

This is a kids' book, after all, so let them have their wide angles and ice cream panaceas!

Art - 5: This work is exactly what it's supposed to be - iconic, expressive and simple. And all of those things consistently.

Why don't I just use that every month for this section of the review? It'll be like using the logo multiple times in the book (instead of, say, something that indicates what's going on in the story) only in this case I'm telling you that why I'm repeating myself is exactly because that's how appropriate and successful the art is? What a way to turn cynicism with corporate branding into something positive! Call it a gesture for all the readers of all the ages! Who wants sprinkles?

Cover Art - 5: I don't completely like that the cover serves as the title page, but I might if I thought the repeating logos inside conveyed clear information. Artistically, in any case, it's spot on. I lament only the editorial content - that no fewer than three question marks and four exclamation points precede the actual answer to the very question that punctuation supports (talk! about! anticlimactic! overkill!) and that Superman is seen here behaving exactly opposite to the way he behaves in the story, which might be fine as some kind of intertextual meta-joke (!!!) on duality or something but which probably isn't given that only Superman, who does not even really feature in this issue, is shown to be behaving oppositely.

But fun, all the same.