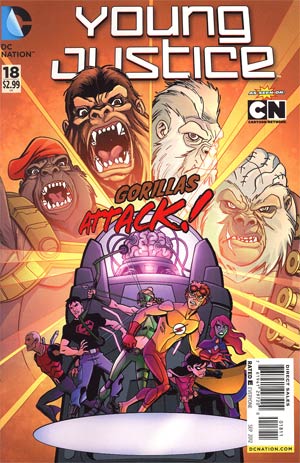 Click to enlarge
A recap of the past season's developments of episodes starts us off (I won't spoil it for those of you who haven't seen the series) but suffice to say the team has a new mentor in the shape of Captain Marvel and a new team member, Wolf, adopted by Superboy.

The team had recently fought a villain named Brain, who it seems has far reaching links in his organization. One such link has Batman nervous, an operation in the Bwundan Jungle and he assigns its destruction to the Covert League. Captain Marvel is eager to join the teens but Batman holds him back and explains they don't need a 'carer.' Marvel struggles to hide his disappointment as he is secretly a boy himself.

The team don't do very well as, unbeknownst to them, they are spotted immediately by Brain and his allies Mallah and Ultra Humanite. While each plot to take one another down, the Covert League struggles with its own problems. Aqualad is still hung up on Tula, and Wally can't stop thinking about the ladies, despite both of them having eyes for Conner (again won't spoil how). By the time they fully group and establish a solid mental link they are surrounded by apes.

Aqualad promptly forms an attack plan. He instructs M'Gann to go invisible, Conner to remove their inhibitor collars, Robin to provide cover and Kid Flash to find a clear escape route. M'Gann is successful but the rest of the team aren't so lucky. The apes aren't wearing collars so Conner can only fight the apes to a stalemate. Kid Flash would have succeeded if not for Brain's secret weapon - Gorilla Grodd! The psychic backlash of his arrival knocks out M'Gann and Grodd physically incapacitates Wally at the same time.

Artemis is able to scare off a few apes with her arrows but while Superboy and Aqualad are concentrating on the forces on the ground Grodd is able to climb a tree and slam into them. Artemis turns to help but she is attacked and incapacitated too, this time by Ultra Humanite.

Each of the team is then fitted with an inhibitor and only Superboy, with all his might can muster enough strength to fight it. Though his valiant effort is met with yet more violence and Grodd knocks Conner unconscious. Wolf seeing his friend in danger approaches to attack Grodd but a psychic glare from the ape sends Wolf cowering.

Later in Gorilla City the villains are arguing amongst themselves. Brain is annoyed at the ape's performance in the attack, the fact they couldn't track Miss Martian and the loss of Wolf. Ultra Humanite points out his surgical enhancements did their job but Brain pumping them full of Kobra-Venom might have impaired their performance.

Brain is accepting no excuses and equips Grodd and the other apes with infra red googles. Their mission, retrieve Miss Martian and Wolf. Failure is not an option.

When M'Gann finally awakens she is greeted by Grodd who demands her help.

Story - 4: This was a breakneck pace issue. We skim events of the show really quickly yet the events aren't overlooked and are definitively intertwined with the issue's events and character development. Even the short dialogue between Batman and Captain Marvel offered something. Wish there were more on Brain and his character as those unfamiliar to the series would be lost. Lots to get your teeth into this issue story-wise and plenty of action too. Good stuff.

Art - 4: The artwork this issue is superb. The darkness of the Bwundan Jungle is reflected in the solid inks and coloring. A big step forward compared to the temple scenes last issue.

Cover Art - 4: The ferocity of the apes is conveyed brilliantly on this cover. A really cool threatening image to get you hooked on the story.