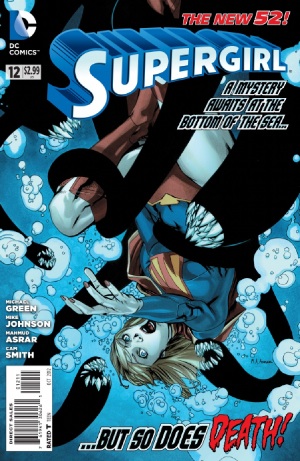 Click to enlarge
Kara is in Superman's Arctic Fortress looking at the bottled city of Kandor as she seeks answers to the questions about her arrival on Earth. Thanks to Brainiac's files, Kal discovers that his cousin's pod orbited Earth's yellow sun for quite some time before she arrived on the planet. Direct exposure to the sun's rays could explain why Supergirl is more powerful than the Man of Steel. Most of Kara's ship was destroyed when it entered the Terran atmosphere. However, one piece is at the bottom of the ocean. Superman offers to help Supergirl find it, but she wants to do that on her own. The Last Son of Krypton believes that it is too dangerous for Kara and everyone around her if she goes out alone. He suggests teaching her about controlling her powers and the responsibilities that come with protecting Earth. Kara misunderstands her kinsman's intentions.There is a small argument between the Kryptonian heroes before the Maid of Might leaves the Fortress. Not wanting to fight Supergirl, Superman says that she should go to prove he's wrong. Only time will tell if he made the right decision.

Supergirl is flying over the ocean in search of the pod debris that landed there. Upon diving into the water, she hears a mechanical voice speaking in Kryptonian. The trail leads Kara to be attacked by mutated life forms. However, they do not kill her. Instead, the Lost Daughter of Krypton is brought closer to what seems to be a large crystal structure like those on Krypton. Supergirl continues following the sounds she hears as she explores the compound. What Supergirl then sees surprises her. A transparent male humanoid greets her. It's Simon Tycho. He's claimed to have changed, and it's quite possible that he may have the answers Kara seeks. Will Tycho really assist her, or has he set a trap from which even Supergirl cannot escape?

Story - 3: I'm going to start by complaining about something that bothers me in comic books - the parenthetical expression. That's basically something written in parenthesis. I don't mind it in text articles, novels and short stories, but for some reason, I feel they're unnecessary in comics. Brian Michael Bendis tends to use them in his work. The two Mikes use parenthesis in this issue, and it really bugs me. Now, that I've gotten that off my chest let's look at the latest Supergirl.

A lot happens in this issue, which is good, but perhaps some things could have waited for issue thirteen. There might have been too many things for just one book. Michael Green and Mike Johnson dragged the part I cared for the least - the scene with the irradiated creatures, and didn't focus enough on character moments between Superman and Supergirl. The way this issue is set up makes it feel like an important piece of the story is missing. The point in which she enters the Fortress and encounters Kal isn't there beyond a phrase. As a result of this, the first few pages feel rushed into this issue merely to please the fans.

The point in which Kara finds the crystal building in the ocean in the splash page on page twenty-one would have been the perfect way to conclude the twelfth issue of the series, and Tycho's return could have been great to end number thirteen. This comic is pretty much going all over the place with some good things and some things that aren't that great. Overall, the final product isn't bad, but I, quite frankly, expected more from it.

Art - 3: Okay, I'm still on the fence about Superman's New 52 armor costume. Yet, that isn't why I gave the art a three. Mahmud Asrar's Supes doesn't look quite right to my eyes. He seems more like Justice League: The New Frontier's Kyle MacLachlan during the period when he did Dune and Twin Peaks. That just doesn't work for this Man of Steel in my opinion. Aside from that, the images in this book are classic Asrar.

Cover Art - 4: I couldn't stop thinking of that god awful film version of Stephen King's Dreamcatcher when I saw this cover. It's decent enough art, but the creatures and bubbles distract too much from Supergirl. As a result, she feels more like someone in the background rather than the image's protagonist.